Can Golfing Make You Deaf? 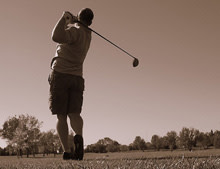 Golf might seem like a relatively safe sport, but a new report in the British Medical Journal suggests there's a hidden danger: hearing loss. Turns out, the loud thwaak! of the new thin-faced titanium drivers is about as loud as a gunshot or firecracker—loud enough to cause permanent hearing damage. British doctors first tuned in to the problem after a 55-year-old male patient sought treatment for mysterious tinnitus and reduced hearing in his right ear. The doctors confirmed that his symptoms matched those of noise-induced hearing loss, although the man's occupation didn't involve loud noises. The puzzle finally came together when the man revealed that for the past 18 months, he'd been teeing off with a King Cobra LD titanium driver three times a week. But the sound from the club had become so irritating that he'd already ditched the club. The doctors also found other golfers online who'd had similar complaints about the "sonic boom" created by the new drivers. To investigate the agents of "golf ear," the doctors recruited a professional golfer to whack golf balls with six thin-faced titanium golf drivers and six standard thicker-faced stainless steel golf drivers, while a sound meter measured the noise levels. The titanium drivers were noticeably louder, and all six produced noise impulses greater than the 110 decibels considered safe for the human ear. The loudest, the Ping G10, reached 130 decibels. Some experts suggest that the boom may have little to do with the actual performance of the drivers and are specifically engineered to give players a more satisfying sound. The doctors plan to continue their research at the 2009 British Open. Meanwhile, they suggest earplugs for frequent golfers. Related Content: DISCOVER: Fairway Physics Discoblog: What's in a Name? Real Diseases Suffer From Silly Name Syndrome

People with Synesthesia’s Senses Are Entangled. Some See Letters as Colors