A device restores movement directly to a man's arm. 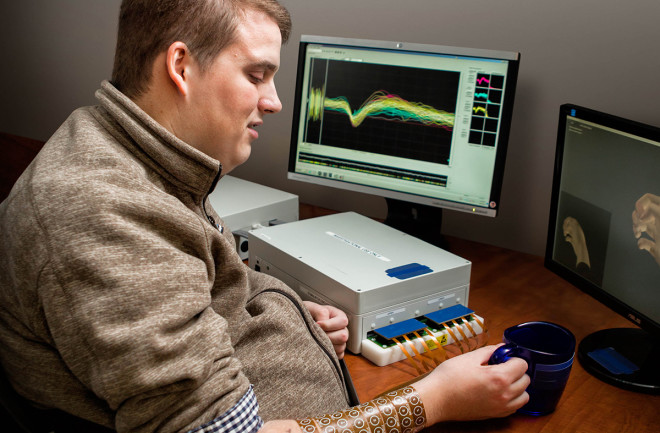 Ian Burkhart, whose upper body was paralyzed from the elbow down, uses a neural bypass to grasp a coffee cup. The device restores movement directly to his arm. | The Ohio State University Wexner Medical Center/Battelle

Ian Burkhart was 19 when he broke his neck, leaving him a quadriplegic, paralyzed and unable to move his upper body from the elbows down. Now, six years later, he can control his fingers enough to play the video game Guitar Hero. And it’s all thanks to a so-called neural bypass.

Burkhart is the first person to undergo this procedure, reported by Battelle Memorial Institute and Ohio State University researchers in May in Nature. Ninety-six electrodes were implanted in his brain, and his arm was wrapped in an electrode-studded cuff. Following hours of practice, a computer learned to identify brain signals associated with different wrist and finger movements. And unlike in other techniques, which send these signals to a prosthetic limb, the computer routed the signals directly to Burkhart’s actual muscles, electrically stimulating them via the cuff.

The equipment is restricted to use inside the lab. But future versions might be portable, according to lead researcher Chad Bouton, now with the Feinstein Institute for Medical Research. They may also be less invasive, he says, eliminating the risks of brain surgery. One promising approach would be using a so-called stentrode.

A new invention developed by an international team under University of Melbourne neurologist Thomas Oxley, the stentrode is implanted using a microcatheter and intended to last for life. It detects brain signals from inside a blood vessel near the motor cortex and relays those signals to a computer.

So far, Oxley’s group, which published its findings in Nature in February, has successfully read sheep brain signals. In 2017, they’ll try the device on human participants — paralyzed patients who will use stentrodes to control mechanical exoskeletons.