Brain Surgery with Power Tools: Not So Hard After All

Henry Marsh, a British neurosurgeon, became a star of today's news by performing major brain surgery on Marian Dolishny—with a cordless $60 hand drill. And the drill ran out of batteries about halfway through, so Doc MacGyver finished the procedure by hand. And there was no anesthesiologist, so the patient only got a local painkiller. Oh, and there happened to be a television crew present—filming a documentary on Marsh and his hand-drill surgeries. 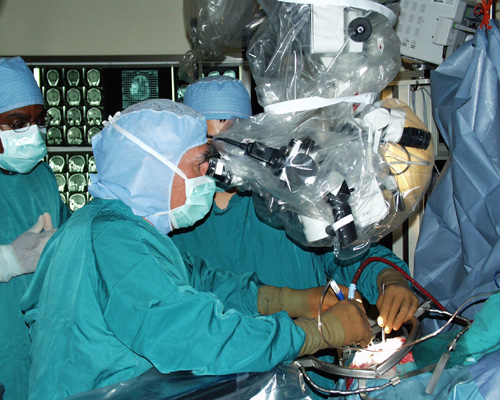 While the newspapers painted the incident as a spontaneous "emergency operation"—as if the surgeon suddenly came across a woman dying from an invasive brain tumor and was able to scrounge up a power drill, dying batteries, and local anesthetic—the surgery was scheduled at a clinic, and is actually somewhat routine for Marsh. He travels to the Ukraine twice a year to perform such free operations at the clinic, where local doctors cannot afford state-of-the-art equipment. (Marsh's hospital in London uses a specialized drill that costs about $65,000). I don't mean to belittle Dr. Marsh's feats, but it is interesting that this one incident is receiving so much attention in the British "news" today—a week before his documentary is released on the BBC. But effective PR campaigning aside, this still seems extraordinary—how is it possible? How does he perform brain surgery on patients who are wide awake? Actually, it isn't unusual for patients to be awake during brain surgery (although "Marsh said that Ukrainians could withstand such a practice because they were 'very tough'"). It is sometimes easier to operate on people with tumors while they are awake so they can communicate with the surgeon during the procedure. The surgeon generally talks with them and asks them questions as they are cutting out as much as the tumor as possible—basically, they keep digging until the patient starts mumbling incoherently, which is a pretty reliable sign that it's time to back off. As for using a Bosch 9.6 volt hand drill instead of a compressed-air medical drill, Marsh says "there’s not a huge difference. It’s simply an ordinary drill which [a Ukranian surgeon] uses with the standard medical drill bits." Indeed, in the comments of the Times Online article, a Ukrainian who says his specialty is anaesthesiology says that "Home Drills are still used in many hospitals here, in [the Ukraine] as well as in many places in former Soviet Union countries by neurosurgeons and orthopaedists. It doesn't matter—if you need to make a hole—you can do it with simple equipment."