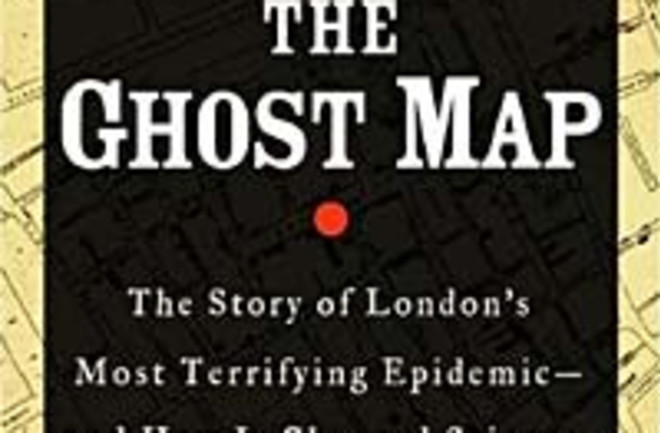 Maybe it's my inner Brooklynite talking, but to me cities are natural phenomena: Ants make hills, bees make hives, humans make cities. Each of these colonies is a meta-organism, really. They all must survive by taking in resources and then figuring out what to do with the waste that comes out the other end. The most innovative organisms and communities figure out ways to recycle waste into raw material for more housing, new appendages, or further growth.

The ability to exploit waste instead of drowning in it comes naturally to ants and bees, but it has proved tricky for us. Modern cities seem to be perpetually teetering at the brink of one crisis or another, be it chemical or microbial in origin. If the pollution doesn't get you, the influenza will. Still, such concerns pale in comparison to the survival challenges that cities used to face.

Steven Johnson makes this fact startlingly clear in his latest book, The Ghost Map: The Story of London's Most Terrifying Epidemic—and How It Changed Science, Cities, and the Modern World (Riverhead, October 2006). The book examines a preindustrial London whose 2 million denizens lacked the sort of sewage infrastructure necessary to carry all their, shall we say, effluence to a safe distance.

Remarkably, the city evolved an elaborate self-repair mechanism. An entire subculture of scavenger workers emerged to scrape, collect, and carry London's human waste to the edge of the city, where it could be used as fertilizer for nearby farms. This in turn led to greater agricultural efficiency, allowing the city to support a larger population, which led to greater waste production, and so on.

The size and population of the city organism was limited only by how effectively it could process its waste. This system worked a bit too well, and eventually London grew so large that its horse-drawn human waste carriers couldn't make it all the way to the city limits. Sewage began to accumulate, and the resulting unsanitary conditions led to a cholera outbreak in 1854.

Then the city came to its own rescue again, inspiring two men whose very collaboration might never have been possible without the urban environment. John Snow, a physician, collaborated with church leader the Reverend Henry Whitehead to develop a death density map that indirectly detected the source of the otherwise invisible outbreak: a single contaminated pump handle. Against conventional wisdom, they discovered cholera to be caused by a waterborne microbe.

Snow and Whitehead were able to merge their ideas because they were both London residents. Had they lived in hamlets on opposite sides of England, their means of communication would most likely have been an exchange of letters. The epidemic would have inundated London in the time it took for mail to be delivered. Even in our modern wired age, physical proximity allows for a kind of spontaneous partnership that rarely emerges online—and the online associations we do enjoy are themselves the products of technological innovations largely born in cities.

As I read Johnson's take on urban networks, I can't help but experience them in a personal way. I live in the same Brooklyn neighborhood as he does. We are as likely to cross paths taking our kids to Prospect Park as we are to come upon each other's books or articles. Some of the ideas in my book on religion were inspired by Johnson's musings on evolution, and I like to think that some of his ideas about the benefits of video games were inspired by mine on kids' media. We have the benefit of each other's insights not just because we share the same intellectual territory but also because we share the same physical one. Our city is the unacknowledged partner in the evolution of our ideas, mixing and matching them along with those of other local writers.

Johnson ends his book with a provocative conclusion: The metropolis is the most ecologically appropriate habitat for humans. Environmentalists now recognize that 6 billion people would do less damage to the planet if they were crowded into dense urban spaces, out of the way of other ecosystems, than if they were spread across the countryside. City dwellers worldwide use less energy for transportation, exploit smaller geographical footprints, have better access to birth control, greater life expectancy, and more economic opportunities for women. This translates to less population growth, fewer mouths to feed, and less fuel that has to be burned.

The advent of sanitation, electricity, and plumbing has increased the world's proportion of city dwellers from less than 10 percent at the time of the 1854 cholera outbreak to near 50 percent today. Although rural dwellers provide the food and resources that keep urbanites alive, the urbanites in turn develop the vaccines, economic systems, and entertainments enjoyed far beyond city limits. Each makes the other possible.

Human beings, organized into cities, also offer the best defense against the most calamitous threats to our species' existence—plague, pollution, and even terrorism. For while the density of cities may make them more vulnerable to a particularly nasty germ or weapon, this same density promotes understanding across social, religious, and ethnic lines. If we can learn to live together within the same urban organism, perhaps we can learn to share in peace the same planet as well.

The Best Smart Mattress for Enhanced Sleep Quality and Comfort