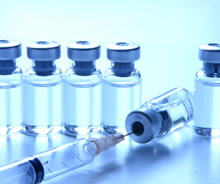 More than a dozen years have passed since the 1998 study in The Lancet in which researcher Andrew Wakefield argued his case that vaccines are the cause of autism. We here at DISCOVER have long considered his claims to be dubious and damaging to public health, but in the last few years the edifice upon which the anti-vaccination movement was built has been falling down. In 2004 most of the coauthors on the Wakefield study retracted the interpretation section of the paper, and early last year The Lancet officially retracted the entire paper. Now, this week, the British Medical Journal's investigation calls Wakefield an out-and-out "fraud." From Phil Plait:

Of course, the word "fraud" implies intent; when writing about Wakefield I had my suspicions, but always wrote as if he were just wrong, and not deliberately lying to vulnerable parents.

But deliberate fraud is what he’s now accused of. Brian Deer, an investigative journalist, has written a multi-part series on the BMJ site which slams Wakefield. Fiona Godlee, BMJ’s editor-in-chief, also writes about this… and just to be clear, she uses the word "fraud" nine times in her editorial.

Brian Deer’s article on BMJ is nothing short of a tour-de-force, and is a horrifying tale of how Wakefield allegedly falsified medical research deliberately while operating under a huge conflict of interest. Deer’s article is meticulously referenced and footnoted… but still, I know this won’t stop the antivaxxers.

about this at Bad Astronomy. Related Content: Bad Astronomy: And now, the antivax failure is complete: The Lancet withdraws Wakefield’s paper

DISCOVER: Why Does the Vaccine/Autism Controversy Live On?