Blood of the British

Twoarticles are out, one by Stephen Oppenheimer, author of The Real Eve, and another profiling some of Bryan Sykes'^1 new research. The headlines are eye-catching, "We're nearly all Celts under the skin!" The fine print:

Even in England, about 64 per cent of people are descended from these Celts, outnumbering the descendants of Anglo- Saxons by about three to one. The proportion of Celts is only slightly higher in Scotland, at 73 per cent. Wales is the most Celtic part of mainland Britain, with 83 per cent. 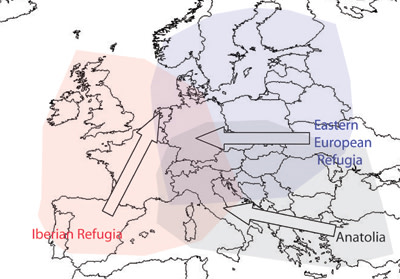 Sykes and Oppenheimer tell the tale of the resettlement of northern Europe, and specifically the British Isles, by Iberian emigrants who ventured north. In both these stories the authors refer to them as "Basques," the sole modern indigenous non-Indo-European people of Western Europe. But of course, 10,000 years ago there were no "Basques," and it is not even guaranteed that the Basque language existed, as such (the modern Basque dialects might be descendents of one particular local dialect which spread and marginalized other languages). Both Sykes and Oppenheimer give relatively high estimates for the proportion of modern British ancestry that is attributable to the first settlers who came back north after the Ice Age, on the order of 3/4. Other works would probably ratchet it down a bit, perhaps 1/2. I think that overall though most workers believe 3/4 is closer to the reality. The other 1/4 are a melange of other groups, from Middle Eastern farmers to Norman aristocrats, though more of the former than the latter. There are varied numbers for the numbers of Anglo-Saxon settlers, and both these researchers tend to understate the impact. But, we can be sure of two things a) The number of Anglo-Saxons was non-trivial. Whether it is 5%, or 50%, it is still significant in terms of the number of people who moved in just a few numbers. Elite language replacement usually leaves a strong substratum trace, but this is not evident in English (Oppenheimer's explanation is that southern England was not Celtic speaking to begin with, though most would strongly disagree with this assesesment). b) There is a strong geographical bias, with the North Sea coastal regions like East Anglia, "The Saxon Shore" of old, being the locus of the newcomers' demographic expansion. Uniparental markers (Y and mtDNA) can only tell us so much, specifically, they tell us histories of the genes, not the "peoples." Of course, national narratives are what we are looking for, but the genes don't always cooperate so occassional massaging of the "Results" section in the "Discussion" occurs.... 1 - The author of The Seven Daughters of Eve.