The Nuremberg Code was drafted in 1947 following the appalling revelations of human experimentation committed in Nazi concentration camps. The overarching goal of the Code was to establish a set of rules for the ethical conduct of research using human subjects, guaranteeing that the rights and welfare of such participants would be protected. Two important principles guide and define this Code: the concept of voluntary, informed consent and that no experiment shall be conducted in which “there is an a priori reason to believe that death or disabling injury will occur.”

Just four short years later, the government of the United States would violate the Code as it undertook one of the largest human experiments in history, spraying the city of San Francisco with a microbe, Serratia marcescens, in a simulated germ warfare attack.

The genus Serratia are a group of soil and water-dwelling microbes with one very neat party trick: the manufacture of a red pigment known as “prodigiosin,” derived from the Latin prodigiosus for its marvelous and seemingly supernatural coloring; this color ranges from a lurid vermillion to a washed-out pink depending upon the microbe’s age. This unique property has been regularly exploited in microbiology as a biological marker, tracking metabolic behavior and transmission of bacteria in various environments. For this reason, the microbe is an ideal tool for such work, a showy microbe that naturally flies a very noticeable red flag.

The origins of Serratia are, despite the microbe’s technical laboratory applications, often quite prosaic. The bacteria thrives in wet environments and may be seen forming pink streaks on the insides of shower curtains and along toilet bowls in the homes (surely not mine or yours) of the sanitationally challenged. 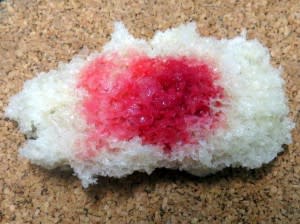 Serratia growing on a chunk of bread. Image: DBN. Click for source.

Serratia growing on a chunk of bread. Image: DBN. Click for source.

The bug also has a fondness for starchy foods, and it was recognized as early as the sixth century BCE, when the philosopher and mathematician Pythagoras noted the presence of what appeared to be unusual spots of crimson blood forming on bread (1). It has been proposed that Serratia’sproclivity for starch may have contributed to the Catholic doctrine of transubstantiation, wherein the bread of the Eucharist represents the body of Christ.

It was this same curious habit of pigment production that was exploited by the US military amidst the cooling atmosphere of Soviet-American relations in the 1950s. The flashy Serratia marcescens was used as the model organism in a simulated germ warfare attack known as “Operation Sea-Spray.” The goal? A “vulnerability test” to identify susceptible regions in the event of a biological terrorist attack. San Francisco was chosen for its unique geography and proximity to the ocean, as well as its dense population and the tall buildings present throughout its downtown (2).

Over a period of six days in September 1950, members of the US Navy sprayed clouds of Serratia from giant hoses aboard a Navy minesweeper drifting two miles along the San Francisco coastline, a bacterial fog quickly enveloped and disguised by the region’s own mist. By monitoring the air at 43 scattered sites throughout the region, the Navy found Serratia bacteria blown throughout San Francisco and extending to the adjacent communities of Albany, Berkeley, Daly City, Colma, Oakland, San Leandro, and Sausalito (3).

In this regard, the experiment was a success: the San Francisco Bay was identified as a highly susceptible site for a germ warfare attack and a quantifiable range for the airborne dispersal of microbes was established. A 1951 military report on the experiment summarized the findings: “It was noted that a successful BW [biological warfare] attack on this area can be launched from the sea, and that effective dosages can be produced over relatively large areas” (4). 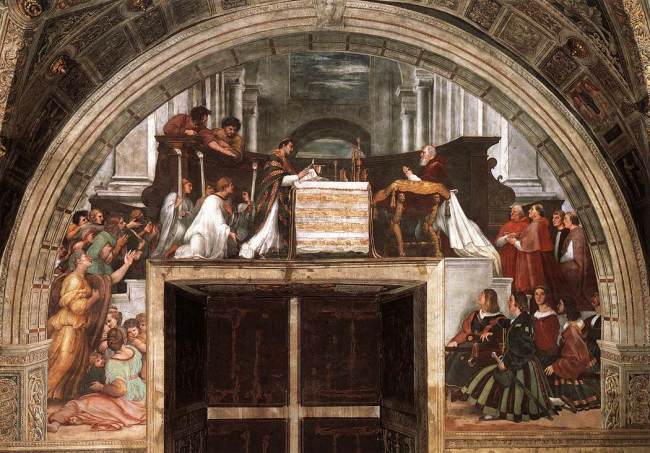 Raphael’s “Mass at Bolsena,” depicting the miracle of transubstantiation, in which the bread began to “bleed.”

It was estimated that the city’s 800,000 residents had each received a heavy dose of Serratia, inhaling millions of bacteria throughout the testing period. In its report, the military further concluded “that Serratia marcescens is so rarely a cause of illness, and the illness resulting is predominantly so trivial, that its use as a simulant should be continued, even over populated areas” (5).

However, Serratia can cause illness and the repercussions of this experiment extended far beyond a slightly foggier week for San Franciscans. A week after the spraying, eleven patients were admitted to the now defunct Stanford University Hospital in San Francisco with severe urinary tract infections, resistant to the limited antibiotics available in that era. One gentlemen, recovering from prostate surgery, developed complications of heart infection as Serratia colonized his heart valves. His would be the only death during the aftermath of the experiment.

Stanford University Hospital doctors culturing the patients’ urine on petri dishes found an unusual and unexpected discovery: microbes blushing with a cherry red pigment (6). Infection with Serratia was so rare that the outbreak was extensively investigated by the University to identify the origins of this scarlet letter bug. Though the source of this unusual organism could not be located despite an exhaustive epidemiological search, Stanford published a report on the outbreak, noting that “the isolation of a red pigment-producing [bacterium] from the urine of human beings was of interest, at first, as a curious clinical observation. Later, the repeated occurrence of urinary-tract infection by this organism, with bacteremia in two patients and death in one, indicated the potential clinical importance of this group of bacteria” (7). It was the first recorded outbreak of Serratia in the history of microbiology. 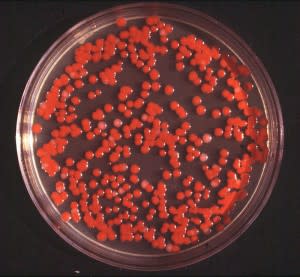 A culture of Serratia marcescens. Image: Brudersohn. Click for source.

A culture of Serratia marcescens. Image: Brudersohn. Click for source.

This would not be the last time that such “simulation” experiments would be carried out on American citizens. From 1950 to 1966, the military performed open-air testing of potential terrorist weapons at least 239 times in at least eight American cities, including New York City, Key West, and Panama City, FL, exposing still unknown numbers of Americans to Serratia and other microbial organisms (4). In the majority of those cases, exposure to the microbe was nothing more catastrophic than exposure to other microbes in a dust cloud. For a minority, including the elderly, young children, and immunocompromised, such exposure posed serious health risks.

Following President Nixon’s 1969 order unequivocally ending both offensive germ warfare research activity and the stockpile of biological agents, the military ceased all simulation tests on the American public. But it is this one event, the Serratia spray of San Francisco, that stands out among the many covert experimentations on uninformed American citizens committed by the US government, largely due to the scale and scope of the operation as well as the diligence of Stanford Hospital in identifying the homegrown outbreak and publishing their findings. It is one of the largest offenses of the Nuremberg Code since its inception, a deplorable betrayal of the of public health and safety, of informed consent and civil liberties.

Just a year after “Operation Sea-Spray,” the US Civil Defense released a PSA to the American public, “What You Should Know About Biological Warfare,” educating the populace on the steps to take in the event of a biological attack from our cold war enemies. Read more and watch the video here.