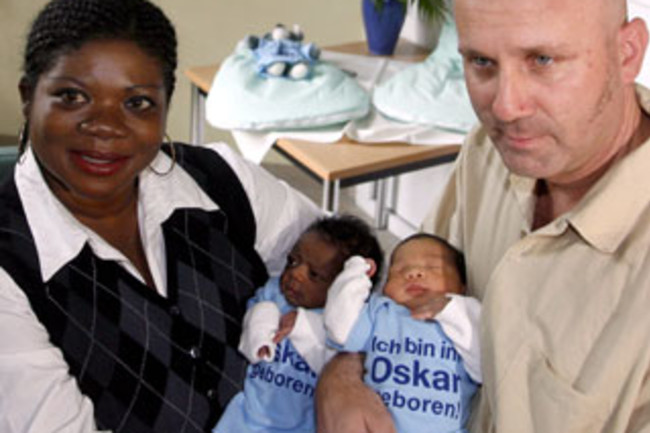 I was curious why an old Genetics and Health post, Twins with Different Skin Color Genes, was sending me many referrals today. Now I know, Two in a Million: Twins Born - One Black, One White:

The twin boys, named Ryan and Leo, are the offspring of a mixed-race couple. The mother, Florence, hails from Ghana in western Africa, and dad, Stephan, is from Potsdam in Germany.

"Ryan came first, and everything was as usual," said the hospital's doctor, Birgit Weber. "But when Leo was born, I couldn't believe my eyes."

"Both kids have definitely the same father," the doctor added.

These aren't the first of these "amazing" of twins. I've posted on this sort of story before, Can you tell if you're black or white?, "Black" & white twins again and Ivory & ebony, twins again...and again.... I touched on the major genetic points in depth in those posts, but this case is a bit different since you have two parents who are monoracial; this makes the odds in terms of genotypic combinations a bit confusing. I think that the easiest way to explain the outcomes are stochasticity of gene expression during development, and, possibly gene-gene interactions between these two parents which allow for deviations outside of the expected range. If what I'm saying is unintelligible to you, I recommend you read the posts I linked to above, it will make the context clearer. At this point I just want to put a slight spotlight about what the doctor said. The "black" baby pops out, and the doctor isn't surprised, the "white" baby pops out the doctor is totally shocked. Why? The father is white. But we know why: black is dominant to white, black + white → black. I'm generally not one to think that racism is the greatest of all evils, so I don't want anyone to take what I'm going to say next as if there's a major value judgment...but I suspect this expectation that many white people have that blackness dominates over whiteness has two roots; a psychological and sociocultural one. First, deviations from your own population's norm are more salient than from those of the Other. This is a neutral observation. I've talked to Asian people who claim that Eurasians always look more European than Asian, and Europeans who claim the inverse. I suspect this is just a natural function of the fact that people have more attention to detail in regards to their ingroups. The second factor is the one I don't want people reading too much into,^1 but I suspect it is just due to the early 20th century idea that the superior Nordic race's qualities are easily diminished by admixture with Colored races. I think that this is the same factor which drives the continuous reemergence of the blondes going extinct meme. This particular idea actually dates back to the Victorians and has persisted across decades and medium (there have been two internet outbreaks of the blondes-going-extinct meme since I've been blogging!). In our ostensibly post-racial and non-racist era the explicit connotations of superiority have been removed from the equation, but the shadow of the general idea of the potency of Colored blood in wiping away the features of the Nordic race still persist. I get emails from people which imply the persistence of this theme in the general population; e.g., an East Asian woman who is married to a British man was told by her mother-in-law that their children would of course look Asian because "Asian blood is strong." I didn't get the impression that the mother-in-law was racist or objected to the mix-marriage, but this woman, raised in China, was confused because her own childhood folk genetic expectations were not like this at all, she had perceived Eurasians to be very European in appearance. She came to me for some understanding of the major issues in terms of scientific genetics. In any case, I don't have simple explanations for these sorts of queries. But, I have pointed out that in fact it looks like skin color genes will average out to produce offspring with a complexion closer to that of the lighter skinned parent than the darker skinned one! In other words, when it comes to skin color the folk genetics is just wrong, and the doctor above should really have been more surprised by the "black" twin than the "white" one. 1 - I believe most humans wish to perpetuate the broad outlines of their phenotype into the future. This naturally implies that many white people want features associated with whiteness to persist into the future, and that entails some discomfort with the idea of hybridization. Very few white people are easily candid with me about this sort of thing because I'm colored and they of course assume that I'd get offended, especially if they're aware that I'm pretty much guaranteed of sullying the white gene pool! But even if no one is explicit about it there are cues and hints that suggest that many whites are just as phenotypically conscious privately as people of the colored races are openly; e.g., the way people will talk about blonde hair and blue eyes as especially notable markers of aesthetic virtuosity in children and young adults. These are characteristics of course almost universally of white people, so the implicit signal is pretty obvious about which race exhibits the greatest potential for beauty in the eyes of those who are expressing these sentiments. To give a specific example, on a recent 60 Minutes they profiled the white son of an American deserter in North Korea (his mother was the daughter of a Romanian diplomat). Morley Safer observed that this young man's blue eyes and blonde hair of course made him very popular with the women in North Korea. One could claim that this was simply a nod to the value of exoticism, but just change the context to rural America and a Korean young man, does anyone believe that his black hair and Asian features would make him inevitably attractive to farm girls? :-)