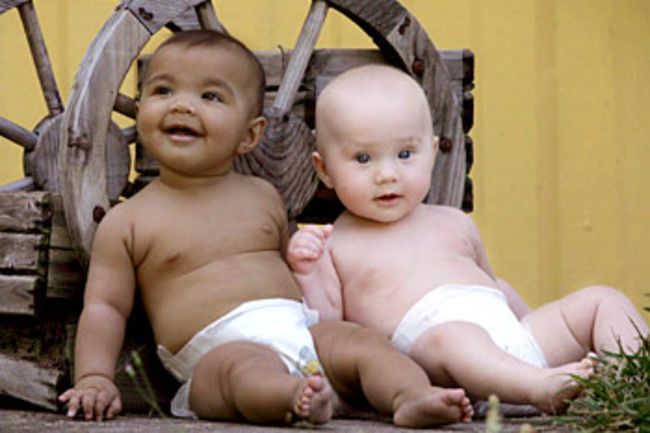 Hsien-Hsien Lei points me to another story about black and white twins. First, the "black" twin is clearly mixed race, her skin color is between the modal complexion of Europeans and sub-Saharan Africans on the von Luschan scale. The "white" twin on the other hand does seem to exhibit the color of someone of European descent. What's going on here? This is somewhat different than the other case of black and white twins, in that case both parents were mixed-race, in this case the father is white (German) and the mother is mixed-race (Jamaican & English). The two cases are different even though the outcome is pretty much the same in appearence, which goes to show that there are many ways to skin the cat.

In any case, you are getting the "million to one" odds story here. Let's see how you get there. The math here is pretty simple. You know that there are 4-5 loci which control most of the skin color variation between geographic races. Very dark skinned peoples seem to exhibit a "consensus sequence" where all the genes are "on" and light skinned peoples often lose function so the genes are operationally "off." To simplify the math, let's assume there are 4 loci which result in the skin color variation between these twins and between Africans and Europeans. Humans are diploid, we have two copies, alleles, of each gene. In a simplified model dark-skinned sub-Saharan Africans would be fixed for functional alleles on all the loci, so you'd have 4 pairs "on." Light-skinned Europeans would be "off" on all the loci, so you'd have 4 pairs "off." Genetically, a mixed-race individual, an F1 hybrid, who is half-black and half-white would have alternating alleles on each locus because they would receive a functional allele from their African parent and a nonfunctional one from their European parent, so, you expect their skin color to be between their parental values if you assume additivity and independence of the average effect of the loci (this is close enough to reality). Now, if this mixed-race individual mates with someone who is European, what happens? In this case, the European father is going to automatically contribute a nonfunctional allele on every locus. In other words, for each locus the children are guaranteed one nonfunctional allele. This means that the variation will be all on the mixed-race mother, and the math here is very simple: you know she has an "on" and an "off" copy because one of her parents was African and the other European, so on each locus there is a 1 out of 2 chance for either allelic variant. So, you have: (1/2 chance of "on" allele)^4 loci = 6.25% chance that all loci will be "on" So, you have: (1/2 chance of "off" allele)^4 loci = 6.25% chance that all loci will be "off" That means that in this pairing there is a 1 out of 16 chance that any given child will be as white as the father or as brown as the mother, with the expectation being in the middle. What are the chances of this particular outcome: one white twin, and one "black" twin? Well, if each child is a fraternal twin the chances of the outcomes are independent, so you multiply across, 1/16 X 1/16 = 1/256, or one out of a 256 chances to get this combination, but...you have to double it because there is a case where the colors might be reversed, so it is actually 1 out of 128, or 0.8% of fraternal twins with this combination of parents would come out like this. So to get to 1 in a million you need to mutiply out by the fraternal twinning rate, and this exhibits interpopulational variance as well as dependency on diet. In Japan it is 1 in a 1000 while in some African nations it is 15 in 1000. Using the Japanese fraternal twinning rate you get 1 in 128,000 chance, and the African twinning rate a 1 in 8,500 chance. So not quite 1 in a million! The only caveat I want to reiterate is that this case is dependent on cultural perceptions of race. The complexion of the white twin is clearly similar to that of Europeans, but the "black" twin is not in the color range of typical West Africans (the source population for Jamaica). It would simply be impossible for the offspring of a European father and a mixed-race mother to be as dark as a sub-Saharan African, but Western standards of "black" are considerably more elastic than "white." In the previous story about black & white twins, the "black" twin again was not as dark as a sub-Saharan African, so it wasn't actually as extreme a case of resegregation of alleles as the press made it out to be. Update: Due to some comments I will be more specific about my assertion that the "black" twin is "clearly" mixed-race: the population of comparison I had in mind did not include all sub-Saharan Africans, but a subset derived from the coastal areas of West Africa. The reason being that the vast majority of the Africans in Jamaica were derived from this region. If the child on the left was born in Jamaica I suspect that based on phenotype the population would classify it as "mixed-race," not black. This is not to say that some coastal West Africans do not exhibit the same phenotype (though in places like Accra there was also a non-trivial admixture with Europeans over the centuries) in regards to complexion, but I would hold that they would be a distinct minority, to the point where knowledge of the priors (e.g., that this child was born outside of Africa in the diaspora) would imply non-African ancestry. This is only relevant insofar as my concern in this post was to elucidate the genetic logic clearly and I believed that that logic would be muddled if I let stand the sociologically constructed dichotomy of a "black" and a "white" twin.