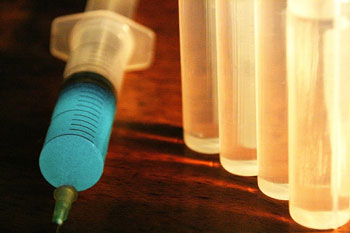 For African women looking to avoid pregnancy, hormone shots seem like a good choice. They don't require your partner to take responsibility for birth control, and they can be given once and then forgotten about for months. But that could be shaken by a study of nearly 4,000 women in seven African countries

that found that hormone shots double a woman's risk of contracting HIV, as well as doubling the risk of her passing it on to a partner. And it doesn't appear to be because of decreased use of condoms in couples where the woman is on the shot: the researchers, who published their work in The Lancet Infectious Diseases, accounted for that, and found that the effects were still there. Why this happens isn't clear, but it's possible that the hormones in the shot may alter the environment of the female reproductive tract to make it a more livable place for HIV. The team found that those on the shot have higher concentrations of the virus in their genital fluid than those not on birth control, though blood levels remain the same, suggesting that there's something to the idea that the vaginal environment is altered. More work probing this finding will be required, perhaps including a randomized controlled study, which this was not. But going forward, the researchers say, doctors providing birth control shots in clinics in Africa, where the prevalence of HIV is a public health crisis, should emphasize that condoms should be still be used in order to avoid spreading or contracting the virus. [via the NYTimes