Bioterror Attack Likely in the Next 5 Years, Congressional Report Says 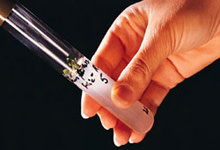 Somewhere in the world within the next five years, terrorists are likely to use a biological agent like anthrax or Ebola in a major attack, a new congressional report predicts. The report

The report, which will be officially released on Wednesday by the Commission on the Prevention of Weapons of Mass Destruction and Terrorism, covers the threat of both biological and nuclear attacks. It argues that bioterrorism is a greater threat: Nuclear facilities are closely guarded, the report says, while many civilian labs contain dangerous pathogens and could more easily be breached.

The number of such "high-containment" labs in the United States has tripled since 2001, yet U.S. officials have not implemented adequate safeguards to prevent deadly germs from being stolen or accidentally released, it says. "The rapid growth in the number of such labs in recent years has created new safety and security risks which must be managed," the draft report states [Washington Post].

The list of pathogens that could be "weaponized" by terrorists includes anthrax (which was used in the 2001 scare that is now thought to have been carried out by government scientist Bruce Ivins), a deadly Ebola virus, and more benign germs that could be genetically modified to resist antibiotics or vaccines. The commission's chairman, former senator Bob Graham, also cited the 1918 flu virus as a potential danger; that virus, which killed millions, has vanished from the population but was recently recreated in a lab.

"Today it is still in the laboratory, but if it should get out and into the hands of scientists who knew how to use it for a violent purpose, we could have multiple times the 40 million people who were killed 100 years ago," he said [CNN].

Although the Bush administration spent more than $20 billion on biodefense research and on drug stockpiles, the bipartisan report still argues that the administration did not devote enough resources to the threat.

"The more probable threat of bioterrorism should be put on equal footing with the more devastating threat of nuclear terrorism," the draft says. It calls on the Obama administration to develop a comprehensive approach to preventing bioterrorism and "banish the 'too-hard-to-do' mentality that has hobbled previous efforts" [Los Angeles Times].