With GMOs facing political opposition in much of the world, more low-tech approaches are quietly making a big difference. 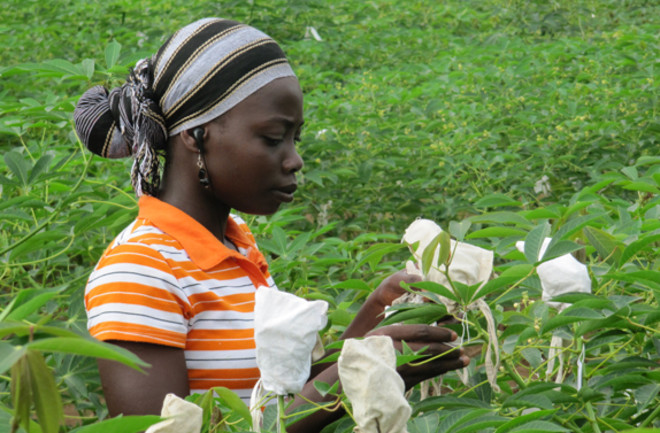 A technician in Nigeria breeds cassava plants to maximize vitamin A. | Courtesy Harvest Plus

In 1994 Howarth Bouis stood before potential donors at a conference in Maryland and unveiled his plan for combating malnutrition in the developing world. Bouis, an economist at the International Food Policy Research Institute (IFPRI), envisioned impoverished farmers in Africa and South Asia growing staple crops that are enriched in key nutrients like iron, zinc, and vitamin A. His presentation had the audience hooked—until he said he would accomplish the feat via old-fashioned plant breeding techniques.

At that point Bouis might as well have been lecturing on plows and sickles. Conference attendees wanted to solve the hunger problem with high-tech science, the kind of advances that produced incredibly effective fertilizers and pesticides during the green revolution of the 1970s. Their attention had just turned to genetically modified crops, engineered with specific genes that would not only enhance nutrition, as Bouis proposed, but also boost yields and instill resistance to pests and weed killers. Bouis came away with a single $1 million grant—a fraction of the money needed to reach his goals.

People ignored Bouis then, but they don’t anymore. While most genetically modified food projects are stuck in political purgatory, Bouis’s HarvestPlus program has brought nutrient-rich crops to tens of thousands of African farmers, and they will soon be available to millions more. “When you breed conventionally,” Bouis says, “there’s no controversy.”

Bouis’s passion for improving agriculture in the developing world began in the 1980s, when he went on aid expeditions throughout the Middle East and Asia. Some 65 percent of African and Southeast Asian children have iron deficiencies that can lead to anemia and fatigue. Vitamin A deficiency produces 500,000 annual cases of blindness among children under age 5 (half of whom do not survive), and lack of zinc kills 800,000 a year. “They had so much strength and courage despite their poverty,” he says. “That’s always inspired me.”

That inspiration drove Bouis’s work IFPRI, where he began exploring the idea of taking native plants and mating them with similar varieties that have a desired trait. If an African species of sweet potato could attain the nutritional benefits of a North American variety naturally high in vitamin A, for instance, then perhaps malnourished African farmers could grow their own nutritious sweet potatoes. Unfortunately Bouis needed money to find out whether that would work. It was not easy selling a meticulous program dedicated solely to fighting malnutrition when geneticists said they were on their way to solving that and a slate of other problems.

In 1993 European researchers Ingo Potrykus and Peter Beyer began infecting rice grains with genetically modified bacteria that transmitted individual genes into the plant’s DNA. Seven years later, they found three genes—one from a bacterium and two from a daffodil—that programmed the plant to produce beta-carotene, a precursor of vitamin A. The genes also gave the grains a yellow tint, earning them the name Golden Rice. Further tinkering added genes to increase yields and ward off insects. When Potrykus and Beyer published their results in Science, many scientists and media outlets proclaimed that genetically modified crops would hasten a second green revolution.

Bouis was thrilled at the potential of Golden Rice, but its success seemed to make his own project a lost cause. Limping along with his modest grant, he had scoured the world’s seed banks for high-nutrient varieties of rice, wheat, beans, cassava, corn, and sweet potatoes, but he couldn’t do much more without additional funding. “I told myself that I’d tried hard enough, and that it wasn’t going to work,” he says.

As golden rice faltered, Bouis’s idea arose from the dead. In 2003 he secured $3 million more from the World Bank and $25 million from the Bill and Melinda Gates Foundation. He branded his project HarvestPlus. “We had just been doing a study here and there to prove that the concept might work,” he says. “Now we could actually start a breeding program that had a serious chance of being successful.”

Bouis and his colleagues across Asia and Africa began crossing hundreds of varieties of staple crops. They took pollen from a Latin American breed of cassava naturally high in vitamin A and poured it into the flower of an African variety. About three months later the plant bore fruit, and the breeders planted the seeds. They studied the new plants to see if they incorporated both sets of desirable traits, and then bred them with another variety to bolster those traits and eliminate deficiencies.

After a dozen iterations of this selective breeding process, Bouis and his team finally produced the perfect cassava plant for central African farmers. It could survive in the soil and climate of the region. It had the floury, dry taste that the farmers were used to. And most important, it packed a hidden nutritional punch of vitamin A. The same technique led to the creation of high-iron varieties of beans and pearl millet, zinc-enriched rice and wheat, and sweet potatoes fortified with vitamin A.

In 2007 HarvestPlus introduced its first nutritionally enhanced crop, the vitamin A sweet potato, to farmers in Mozambique and Uganda with little fanfare and no controversy. In a study of 24,000 households, women and young children almost doubled their daily vitamin A intake.

Late last year, Bouis released the vitamin A–enriched cassava in Nigeria. This year he is introducing iron-rich beans to Rwanda and the Democratic Republic of Congo, zinc-packed wheat to Pakistan, and iron-fortified pearl millet to India. He projects that the sweet potato will reach 200,000 homes next year and 10 million in 17 African countries by 2020. Meanwhile Golden Rice and other genetically modified crop programs remain stalled.

Despite the superior track record of HarvestPlus, Bouis points out that he is not forever wedded to his old-school approach. He invests about 2 percent of his $30 million budget to fund genetics research. If the tide turns toward high-tech crops, Bouis will be ready to embrace it. But his crops are making a difference right now.

It may not have the flair of genetic engineering, but the breeding technique perfected by Howarth Bouis and HarvestPlus has the advantage of actually supplying the developing world with several nutrient-rich crops. Below, a sampling of the improved foods that will soon help fight malnourishment.

Beans Iron deficiency is a huge problem in the central African countries of Rwanda and the Democratic Republic of Congo, where in some provinces up to 50 percent of children are anemic. Later this year HarvestPlus will introduce beans that have double the iron content of native bean plants.

Corn For years global aid groups have distributed vitamin A capsules to children in the southern African country of Zambia, yet more than half of them still suffer a vitamin A deficiency. In response, HarvestPlus will soon release corn enriched with the essential vitamin. Bouis will pay close attention to the response of Zambian farmers: They are accustomed to white corn, but the nutrient-rich version is orange.

Rice In Bangladesh and India, poor people receive up to 80 percent of their calories from rice. Bouis figures they might as well ingest some zinc, vital for metabolism and immunity, in the process. HarvestPlus projects that people eating its specially bred rice, to be introduced next year, will receive about 40 percent of the recommended daily zinc intake.