Beyond trees and European trees

Submitted for your approval, a very important post and preprint from Dr. Joseph Pickrell, Identifying targets of natural selection in human and dog evolution. If you read the preprint there's a lot of good stuff. Dienekes highlighted the most relevant aspect: representation of genetic relationships with phylogenetic trees mask the likely reality of gene flow and admixture. In the guts of the paper though Pickrell et al. use their framework to identify some novel patterns. For example, that Cambodians may be descended in small part from some basal Eurasian lineage (~15 percent), perhaps their equivalent of "Ancient South Indians"? Using ADMIXTURE and such it has long been evident that there's something funny there. My own working assumption was that the relatives of "Ancient South Indians" could be found in Southeast Asia, though these results (preliminary as they are) might imply something even more interesting. Second, there is a tidbit which might lend support to the fans of the Solutrean model, or can be interpreted in that way (I suspect that it does not, but it could be spun in such a fashion). Next, a provocative post with the title Northwest Eurasians + Southwest Eurasians + Mesolithic survivors = modern Europeans:

For a long time, it was generally accepted that Europeans were direct descendants of Palaeolithic settlers of the continent, with some Middle Eastern ancestry in the Mediterranean regions, courtesy of Neolithic farmers. However, in the last few years, largely thanks to ancient DNA results, it dawned on most people that such a scenario was unrealistic. It now seems that Europe was populated after the Ice Age in a big way, by multiple waves of migrants from almost all directions, but especially from the southeast. Getting to grips with the finer details of the peopling of Europe is going to be a difficult and painstaking process, and will require ancient DNA technology that probably isn’t even available at the moment. However, the mystery about the basic origins and genetic structure of Europeans was solved for me this week, after I completed a series of ADMIXTURE runs focusing on West Eurasia (see K=10, K=11, K=12, K=13 and K=14). The map below, produced by one of my project members, surmises very nicely the most pertinent information from those runs (thanks FR7!). It shows the relative spread of three key genetic clusters, from the K=13, in a wide range of populations from Europe, North Africa, and West, Central and South Asia. The yellow is best described as Mediterranean or Southwest Eurasian, while the cyan and magenta, which are sister clades, and can be viewed as one cluster for the time being, as Northwest Eurasian. 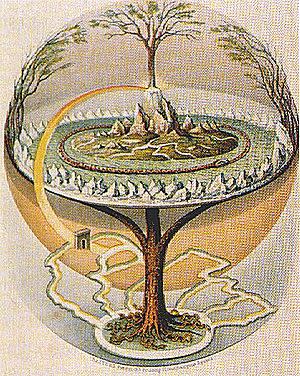 How plausible is this? I would rank it more plausible now than the idea of continuity from Pleistocene populations, and more plausible than a two-population admixture model (i.e., Pleistocene man + Neolithic man). But the reality is that I wouldn't be surprised if it isn't more complicated than the outline above. I am starting to think, as suggested in the post, that using modern populations in a given area as a "reference" for ancient populations in that region area may be misleading us. For example, modern Anatolians or Levantines are often used as pegs for ancient Near Easterners who migrated to Europe. Though not totally bunk, I think this tends to underestimate the demographic heft of migrations of farmers, because we're probably not sampling from the exact group of farmers. This would not matter if there was singularly one locus of the origination of agriculture from which all subsequent agriculturalists derive, but it may not be so pat. There may have been a few peoples in the Fertile Crescent who took to farming at about the same time. I suspect that one branch pushed out into the Western Mediterranean, and on toward Atlantic Europe, before being mostly replaced in the Middle East. In any case, goods times. There are hints that some geneticists are currently examining a lot of ancient DNA, so I think the answers will be forthcoming.