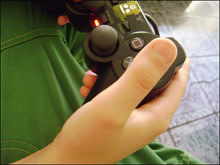 Doctors in Switzerland have diagnosed a skin disorder that editors at The Onion could very well have created. PlayStation palmar hidradenitis is the name given to a condition that skin specialists have identified as being caused by the use of video game controllers. Swiss doctors have reported their findings, which are based on one patient, a 12-year old girl, in the British Journal of Dermatology. The girl had recently started to play games on PlayStation for several hours a day, and continued to do so despite the appearance of red, painful sores. Four weeks after the sores developed, she was examined at the Geneva University Hospital and diagnosed with a skin disorder called "'idiopathic eccrine hidradenitis," which normally causes red, sore lumps on the palms of the hands and soles of the feet. It has been identified before, but rarely on the hands alone and is usually seen on the soles of children's feet after they have engaged in intense physical activity. According to Reuters:

The researchers suspected that grasping the console's hand-grips together with repeated pushing of the buttons produced minor but prolonged injury to the palm of the girl's hands, which can be made worse by sweating during a tense game. The doctors recommended the girl stop playing and she recovered fully after 10 days, the researchers said.

BBC News added that researchers have noted cases of addiction to video games, "but the symptoms had initially been thought to be psychological. However, some physical symptoms, such as acute tendonitis, dubbed Wiitis," have emerged. Related Content: Disco:  Can Video Games Be Good for Your Health? Disco: “Air Guitar Hero” Helps Amputees Test Out New Arms