Beware of the ancient of days!

By now you have probably read in The New York Times, or on theblogs, about the new paper in Nature which reports on the empirical trend toward the children of older fathers carrying more de novo mutations. Really all you need is this figure: 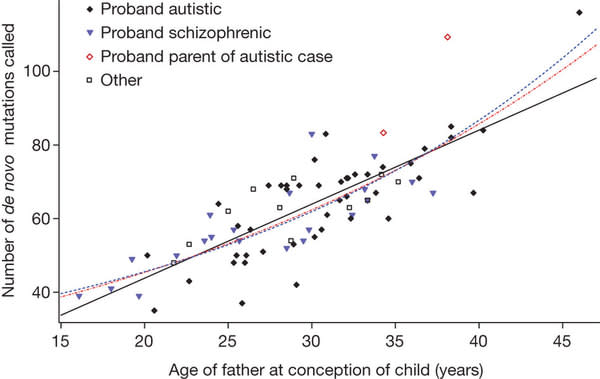 It's probably also useful to remember that you expect 2 more de novo mutations per every year of paternal age, at least across this interval.* Some of the stuff on this weblog is abstruse, but this sure isn't. As a father I'm to the right of the median of this plot. And let's move beyond just new mutations arising from your father. What about from your forefathers? My maternal grandfather was 55 years old when my mother was born (he lived from 1896 to 1996!). My paternal grandfather was 38. Humans of a certain station in life imagine a particular life trajectory. We gain education, establish ourselves in careers, etc. Until recently this long apprenticeship was particular stressful for women because of the "biological clock." But these results suggest that men too might need to be worried about the long term consequences of their delayed reproduction. I don't see our society making adjustments to biological reality. Therefore, I think fetal screening, and perhaps a huge industry of sperm and egg preservation is going to have to emerge in the near future. In fact, both are actually rather affordable today. * There is a lot of variance though. This is all the more reason for high coverage genome sequencing (or at least exome sequencing). Some people could actually make life decisions based on their mutational load, as well as preimplantation screening.