One of the most successful achievements of the "post-genomic era" has been the elucidation of the genetic architecture which undergird the variation in human pigmentation. I like to point out that in 2005 the geneticist Armand Leroi observed in his book Mutants that we didn't know the genetics of normal variation in relation to the trait of skin color. In 2010 one couldn't plausibly write that. We know the genes which control the vast majority of the interpopulational variation in human complexion. This is not due to human ingenuity, but the fortuitous hand that nature dealt us. Pigmentation is a very salient phenotype, evident by the classification of genetically very distinct populations in Africa, India and Oceania as "black." But in terms of a genetic research project it has long been one of the ways to explore patterns of inheritance in model organisms such as mice, in particular in relation to coat patterns and pigment. And luckily for us, many of the genes which are implicated in pigment variation produce similar changes across diversetaxa. Additionally, the genetic architecture of human pigmentation variation is such that most of the variance is concentrated among a few loci of large effect. Concretely, it seems that well over 50% of the African-European difference in skin color as measured by reflectance of visible light is attributable to two genes, SLC24A5 and KITLG. In Europeans around 75% of the dichotomous variation between those with blue and non-blue eyes may be due to changes in the genomic region across HERC2 and OCA2 (these two genes are very near each other). These are the veritable low hanging fruit, amenable to studies with even small sample sizes and modest statistical power, so strong are the effects of the genetic variables. And why is pigment important? Obviously there are social ramifications. But pigmentation is likely a major target of natural selection as well, as I suggested in relation to Neandertals. The results are sometimes confusing, but it does seem that pigmentation related loci are enriched in relation to those genomic regions which turn up as positive in tests of natural selection. Additionally, looking at variation around those genes which are correlated with lighter skin across Eurasia it also seems that it may be that our own lineage has become somewhat paler within the last 20,000 years, perhaps even more recently. And the same may have been true for our possible Neander-kin. At the current rate in regards to pigmentation the age of revolutionary science may soon be over. Extraction of ancient DNA will probably resolve the rate and nature of evolutionary change, while further typing of current populations will flesh out our understanding of the variants responsible for normal human variation. To do that requires more than simply larger sample sizes or improved genomic techniques, it also requires better measurement. The utilization of reflectance indices in studies of study skin color are a step in the right direction, but a new paper in PLoS Genetics points the way toward the same in the study of eye color, Digital Quantification of Human Eye Color Highlights Genetic Association of Three New Loci:

We measured human eye color to hue and saturation values from high-resolution, digital, full-eye photographs of several thousand Dutch Europeans. This quantitative approach, which is extremely cost-effective, portable, and time efficient, revealed that human eye color varies along more dimensions than the one represented by the blue-green-brown categories studied previously. Our work represents the first genome-wide study of quantitative human eye color. We clearly identified 3 new loci, LYST, 17q25.3, TTC3/DSCR9, in contributing to the natural and subtle eye color variation along multiple dimensions, providing new leads towards a more detailed understanding of the genetic basis of human eye color. Our quantitative prediction model explained over 50% of eye color variance, representing the highest accuracy achieved so far in genomic prediction of human complex and quantitative traits, with relevance for future forensic applications.

The main improvement was decomposing the elements of pigment variation which contribute to the phenotypes which we observe and recognize in a gestalt manner through inspection. In particular, they focused on two parameters, hue (H) and saturation (S). It seems to me that H correspondences to the quality of color, and S to the quantity of color. Figure 1C shows how the eye color categories map onto the quantitative metrics (it is somewhat confusing that red = brown, but I assume brown is less useful for display purposes as a contrast with blue or green). 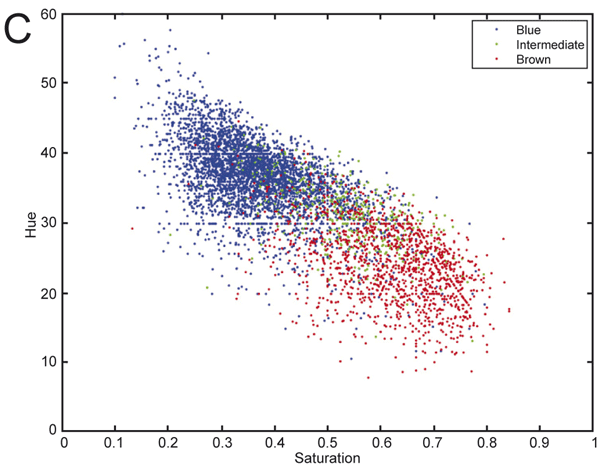 The r-squared here is such that ~60% of the variation of H can be explained by variation of S. In other words, the two are correlated. This is clear in the plot above, as you see a distribution which moves from brown to green to blue. In fact the researchers could take the variation in H and S, yank out the independent dimensions of variance, and find that one dimension accounted for 90% of the variation. What they found by treating eye color as a quantitative phenotype, instead of a categorical one, is that though the primary loci already known to affect variation still showed up in their associations, there were secondary loci which now emerged. This makes sense, as the original procedure whereby what is really a continuous trait was transformed into several distinct categories removes information. Smaller effect loci which impact the change in trait value only on the margins would naturally not show up when you removed variation on the margins so as to collapse the trait into a few broad classes. In other words, if loci X had an effect large enough to shift eye color from blue to brown (as HERC2-OCA2 does) then it would show up. But if loci Y only affects trait value slightly it will be unlikely to shift the trait across categories, and so it would not be discovered. Table 3 shows the effect of different variables, primarily SNPs on the different loci of interest. Beta simply is a measure of the effect of a variable within a linear model. The bigger the beta, the larger the effect on the variable you wish to predict (here, eye color). 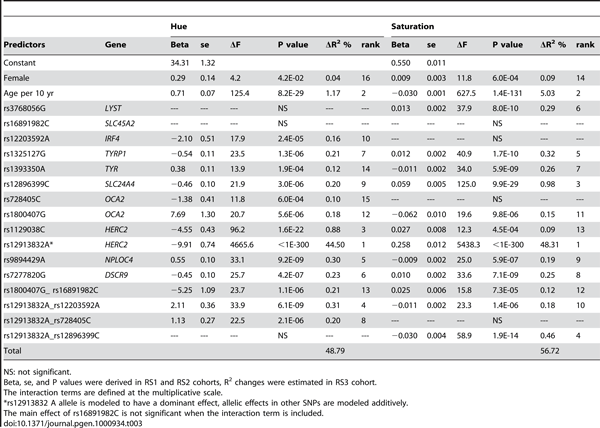 SNPs within HERC2 and OCA2 are still the primary variates, as we'd expect. But other loci also affect the trait on the margins, effects only discernible with a better measurement of the trait. Additionally, there is some evidence that they have independent effects on the two dimensions of the trait in question. With more modest effects and less clear phenotypic measures (at least to human intuition) I would be cautious about overemphasizing these results, but clearly they're in the right direction when it comes to filling in the smaller pieces to the puzzle of eye color. And these aren't simply academic questions. They're of strong forensic interest. Many of the pigment related markers are very good at distinguishing populations, and, they allow us to accurately reconstruct the appearance of perpetrators for crimes where we only have genetic material. With the model they have here they can explain more than 50% of the variation in the two dimensions that they define of H and S. The effect sizes of the marginal loci are modest already, so one might be running into diminishing returns, but from what I gather this is already a significant improvement over eyewitness recollection in relation to eye color. Pigment is hopefully just the tip of the iceberg, perhaps at some point in the future we could predict the rough outlines of someone's whole physiognomy so that computer reconstructions of appearance could rely primarily are retrieved genetic data. Citation: