Being Barbie: the size of one's own body determines the perceived size of the world. 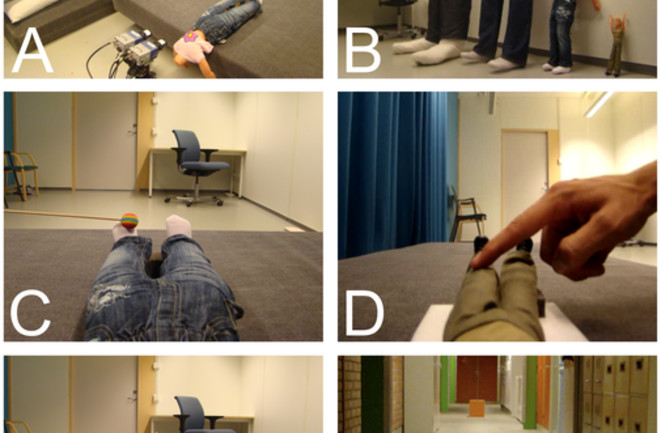 As you probably know, a lot happens in our brains between what we see (the photons that hit our retinas) and what we actually "see" (the scene that we represent in our minds). Even the size and distance of objects is open to interpretation, primarily based on cues in the environment. But do we also use our own bodies as size cues? In this study, the researchers used tiny and giant fake bodies to give people the illusion that they were larger or smaller than they actually are (see Figure 1 above). To create a sense of "ownership of the body," they used a virtual reality setup in which the participant saw the world from the point of view of the mannequin (see full description below). They found that people did indeed use the bodies as cues: with smaller bodies, people judged objects to be larger and farther away (à la "Honey I Shrunk the Kids"), while larger bodies made things seem smaller and closer. Oh, and if you were wondering -- yes, it also works for beer bellies.

Being Barbie: the size of one's own body determines the perceived size of the world. "A classical question in philosophy and psychology is if the sense of one's body influences how one visually perceives the world. Several theoreticians have suggested that our own body serves as a fundamental reference in visual perception of sizes and distances, although compelling experimental evidence for this hypothesis is lacking. In contrast, modern textbooks typically explain the perception of object size and distance by the combination of information from different visual cues. Here, we describe full body illusions in which subjects experience the ownership of a doll's body (80 cm or 30 cm) and a giant's body (400 cm) and use these as tools to demonstrate that the size of one's sensed own body directly influences the perception of object size and distance. These effects were quantified in ten separate experiments with complementary verbal, questionnaire, manual, walking, and physiological measures. When participants experienced the tiny body as their own, they perceived objects to be larger and farther away, and when they experienced the large-body illusion, they perceived objects to be smaller and nearer. Importantly, despite identical retinal input, this "body size effect" was greater when the participants experienced a sense of ownership of the artificial bodies compared to a control condition in which ownership was disrupted. These findings are fundamentally important as they suggest a causal relationship between the representations of body space and external space. Thus, our own body size affects how we perceive the world." Bonus excerpt from the full text: "...We used a version of a previously published full-body illusion in which participants experience a mannequin's body as their own [33]. In the current experiments, participants lie on a bed while wearing a set of head-mounted displays (HMDs). The HMDs are connected to a pair of cameras mounted on a tripod placed behind and facing an artificial body lying on a bed next to the participant (see Figure 1A,B). This setup allows participants to see a real-time 3D image of an artificial body from the first-person perspective, as though their head were tilting forward and they were looking directly at the doll (see Figure 1C). The experimenter then synchronously touches the participant's body (out of view) and the artificial body (in view) with a small rod. This stimulation creates the illusion that the artificial body is the participant's own body and that it senses the touch of the rod. For a normal-sized artificial body, this happens as a consequence of the brain's attempt to reconcile the spatially and temporally correlated visual and somatic signals, resulting in the multisensory perception that the touched plastic body is one's own [33]. In Experiments 1–5, we demonstrate that this illusion can be induced using a small (80 cm or 30 cm) doll or an enormous 400 cm artificial body." Related content: Virtual reality beer belly makes you feel fatter in real life.NCBI ROFL: Ever wish you had a third arm? No? Oh, then…nevermind.NCBI ROFL: Pull my finger! Then snap it off, cut off the tip, and stab it!