Before & After: Respiratory Microbes among Pilgrims to the Hajj

The Hajj, the pilgrimage to Mecca by millions of Muslims from around the world, is one of the largest gatherings of man on the face of the earth. This annual event took place just last month with relatively little fanfare from the news media, which is, from an epidemiological standpoint, a very good thing. Every year, public health officials wring their hands at the thought of possible outbreaks caused by the global pathogen du jour capitalizing upon the convergence of millions of worshipers in the Saudi Arabian desert. SARS stole the headlines in 2009, Middle Eastern Respiratory Virus or MERS had it last year, and Ebola seemed a likely contender for this calendar year.

The Ministry of Health in Saudi Arabia is acutely aware of the risks inherent to such a huge convention of human bodies, with one Deputy Minister noting that “no other mass gathering can compare, either in scale or in regularity” (1). The mass migration of millions of people from over 180 countries and their congregation in one tiny locale for two weeks would seem to be the beacon call to human pathogens. But is the wariness with which we often approach an event like the Hajj well-founded? Are microbes actually being transmitted among pilgrims? A recent article based on work conducted last year by a team of French and Saudi health officials suggests that this indeed is the case. 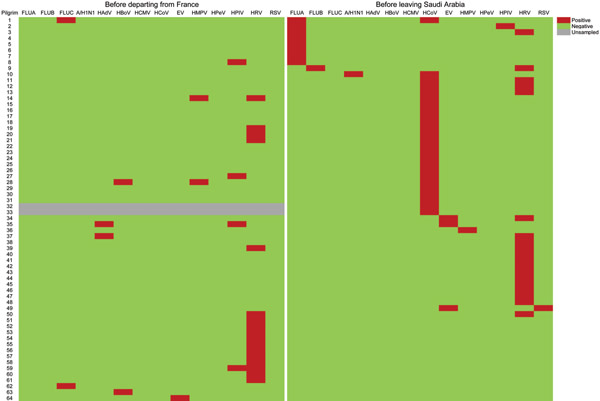 Patterns of respiratory illnesses among pilgrims before and after the Hajj in 2013.FLUA, influenza A(H3N2) virus; FLUB, influenza B virus; FLUC, influenza C virus; A/H1N1, A(H1N1)pdm09 virus; HAdV, human adenovirus; HBoV, human bocavirus; HCMV, human cytomegalovirus; HCoV, human coronaviruses; EV, human enterovirus; HMPV, human metapneumovirus; HPeV, human parechovirus; HPIV, human parainfluenza virus; HRV, human rhinovirus; RSV, human respiratory syncytial virus.Image: S. Benkouiten et al; see references for source. In this study, the Saudi Ministry of Health and the University College of Medicine based in Riyadh, along with French researchers at the Aix Marseille Université and an affiliated University Hospital in Marseille coordinated their research in an extremely effective way in an effort to better grasp patterns of disease transmission during the Hajj (2). Specifically, scientists used a wide variety of techniques to examine a set of Mecca-bound pilgrims both before and after their travel in order to identify the extent of microbe-swapping that occurs among the faithful. Pilgrims who participated in the study were recruited through a travel agency in Marseille specializing in organizing group travel to Mecca. Nasal and throat swabs were collected from individuals just prior to their departure from France in early October, and these same individuals were tested again in Saudi Arabia in late October as they were preparing to embark upon their journey home. Researchers tested these “pre-Hajj” and “post-Hajj” specimens for a slew of viruses and bacteria of the respiratory variety, including influenza viruses, the coronaviruses responsible for causing colds, SARS, MERS, as well as the adenoviruses that can inflict sore throats, conjunctivitis, and fever upon its newly found hosts. The bacterial bugs targeted in these tests included the Streptococcus species that causes pneumonia, the species of Neisseria that causes meningitis, and whooping cough caused by Bordetella infection.

Over the subjects’ three week pilgrimage in Saudi Arabia, nine out of ten pilgrims reported more than one symptom of respiratory infection, such as cough, sore throat, running nose, and fever, with the onset of these symptoms peaking in the second week. The real meat of the study, however, lies with these two discoveries: before departing for the Hajj in early October, over 20% of pilgrims tested positive for more than one virus, while upon returning home, nearly 39% of pilgrims tested positive for the same parameter. In short, a fifth of all people embarking on their international journey were carrying some undeclared microbial baggage, and just under half of them end up bringing back some unintended souvenirs.

Not surprisingly, the study found that “performing the Hajj pilgrimage is associated with an increased occurrence of respiratory symptoms in most pilgrims.” Human coronavirus and influenza viruses A and B were the most common viral stowaways among returning Hajjis, while Streptococcus pneumoniae was the most commonly transmitted bacterium.

Amplification of diseases at the world’s largest gathering of people is nothing new. Outbreaks of the diarrheal diseases typhoid and cholera have regularly occurred in the Hajj’s long history. In 1987, an international outbreak of bacterial meningitis caused by Neisseria meningitides prompted Saudi authorities to implement mandatory vaccination against the bug for all pilgrims. Such precautions didn’t stop an outbreak of a novel serogroup of N. meningitides in 1992, however, and the spread of the disease resulted in over 300 cases of infection within the Kingdom of Saudi Arabia and nine other countries (3). Indeed, one can even look to statistics surrounding medical treatment during the yearly pilgrimage, all of which point to pneumonia as the leading cause of hospitalization, to understand the threat posed by the easy spread of respiratory diseases (4)(5). 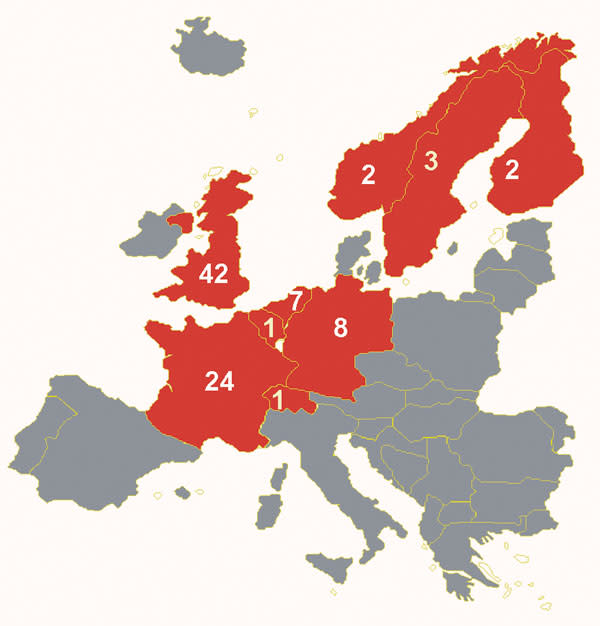 Cases of meningitis caused by a novel Neisseria serotype W135 reported in Europe after the 2000 Hajj. Image: J Aguilera et al, 2002.Click for source. Despite the wise preventative measures implemented by the Saudis, humans can and do carry microbial baggage with them as they converge from all corners of the earth, and thus pose a risk to other pilgrims. The respiratory bugs that are borne into Mecca each year are the same ones you find anywhere in the world; they are thoroughly ubiquitous, made even more so by international travel and globalization. But this doesn’t mean that local strains unique to far-flung communities aren’t eager to find new homes and new bodies to infect. Understanding the movements of these bugs is critical to good public health and to our efforts to protect people at home and abroad.

The very nature of the Hajj - its massive attendance, its regularity, its strict government monitoring - comprises a fantastic opportunity for epidemiological study of the sort that allows public health officials to move from mere conjecture - “I suppose there’s bugs being swapped amidst this million-person soiree” - to proven fact. The structure of the study conducted by this international team of researchers is an elegant and powerful one, and provides us with invaluably concrete answers.

Those in public health often worry about outbreaks of disease, and respiratory disease in particular. As the world population continues to grow and as we come in ever closer contact with one another, we must ask ourselves if these fears are well-founded. According to this study, absolutely. Now, as we consider the next steps in controlling and preventing the spread of disease - possible steps such as the implementation of travel restrictions for citizens of countries undergoing outbreaks as occurred recently for Muslims in Nigeria, Liberia, and Sierra Leone - we can look to the data and breathe a little easier.

It's not only respiratory buggies that can be swapped in Mecca but bloodborne pathogens: Buzz Kill: Blood-Borne Disease Transmission at the Hajj