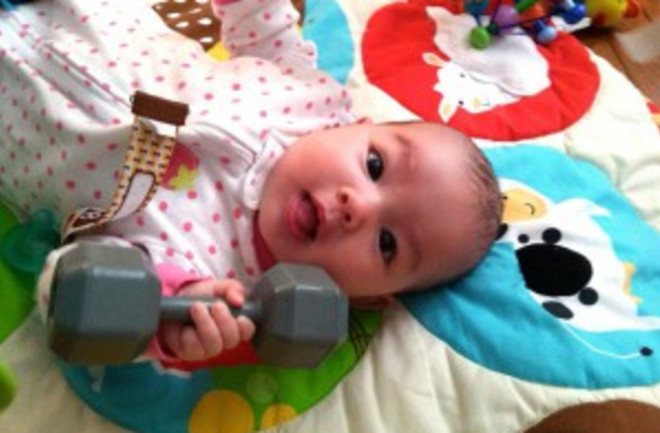 Photo courtesy of Lynn Griffin As you probably know, babies are really out of shape. They're chubby, pretty weak, and could really use some definition in their arms. But before you set your wee one loose in the gym, you'd better read this study, which tested what happens when babies pump iron using wrist weights. This was no workout marathon (the experiment lasted for only 2 minutes at at time); nevertheless, it turns out that the wrist weights do, in fact, interfere with typical baby behaviors, especially when it comes to picking up and dropping objects. Too bad--I guess we'll just have to stick to baby yoga for now.Effect of weight load added to wrists on manual non-exploratory and exploratory behaviors in infants. "Investigating manual actions when infants' upper limbs are heavier can provide information on whether mechanical forces can influence the early ability of exploring grasped objects. This study assessed whether additional weight load affected typical infants' manual non-exploratory and exploratory behaviors. Ten healthy full-term infants were evaluated longitudinally at 5, 6, and 7 months of age. They were tested consecutively without weight and with a weight of 20% of the total upper limb mass (M = 74.7-85.3 g) attached to their wrists while seated in a baby chair. During each condition, a malleable rubber object was presented at infant's midline to elicit reaching, grasping, and object exploration for 2 min. Reactions were recorded using three digital cameras. Behaviors were coded as non-exploratory (dropping) and manual exploratory behaviors (waving, banging, rotating, alternating and mouthing) and were computed by frequencies of their occurrence. The analyses indicated that the frequency of dropping increased in the weight condition independent of age. This indicates that the non-exploratory behavior was affected by the load disturbance imposed by the additional weight." Related content: NCBI ROFL: What makes a cute baby cute?NCBI ROFL: Finally, science brings you…the baby poop predictor (with alarm)!NCBI ROFL: If a baby can do statistics, you have no excuse.