Azores to Atlantis: Africa through the shadows 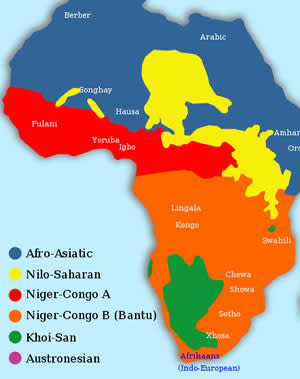 In many ways the image of Africa in the minds of Westerners has become a trope. The "Dark Continent," eternal, and primal. Like many tropes the realized existence of this Africa is only within the imagination. The real Africa is far different. For there is no real Africa, there

. This truth is on my mind this week as two papers of great importance in understanding African genetic history finally saw the light of day. First, Dr. Joseph Pickrell et al. posted their preprint, The genetic prehistory of southern Africa, to arXiv. Second, out of the Tishkoff lab came Evolutionary History and Adaptation from High-Coverage Whole-Genome Sequences of Diverse African Hunter-Gatherers. Let me step aside here and observe a secondary, but non-trivial, detail. The former is an open access preprint. The second is a complete paper published in a relatively high impact journal, Cell, for which the paper itself does not seem typical or appropriate. This is fair enough, most people do not read journals front to back in this day.

But unlike Dr. Joseph Pickrell's paper the paper in Cell is paywalled, and from what I can tell you can not obtain the supporting information without getting beyond the gate!

So if you need that paper, email me and I will send it onward (I would just post it on a server, but I've gotten nasty emails from the legal departments of publishers, so I am wary of doing that). From where I stand these two papers have different strengths. The genetic prehistory of southern Africa has a wide and expansive sampling of individuals and to some extent populations, and, utilizes very clever statistical genetic techniques on SNP data (i.e., hundreds of thousands of variants among the ~3 billion base pairs). Evolutionary History and Adaptation from High-Coverage Whole-Genome Sequences of Diverse African Hunter-Gatherers, as the title suggests, is a very deep and relatively complete read of the whole genomes of ~15 hunter-gatherers, from three populations, Western Pygmies, and two non-Bantu populations from Tanzania, the Hadza and Sandawe (there are other whole genome analyses already of groups to which they can compare these). Personally, I would have preferred genomic analyses of the Eastern Pygmies, who seem more genetically distinctive in relation to the Bantu, but there were likely logistic constraints. 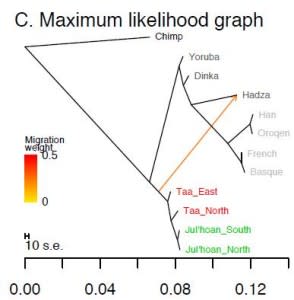 Probably the most interesting finding of the Pickrell et al. paper is that the Hadza and Bushmen seem to share deep common ancestry. More precisely, the Hadza can be modeled as a combination of East Africans and Bushmen, with a 3:1 ratio. Please note: can be modeled as. This does not mean that that is the real history, but, this stylized result probably gives us some insight into the more complex picture. The Hadza and Bushmen are both hunter-gatherers who have clicks in their language. That should shape prior expectations. Additionally, in various genetic analyses they cluster with the Pygmies of Central Africa as a distinct clade from the agriculturalists of Africa. There are other suggestive results in the Pickrell et al. paper. For example, there is evidence of back-migration from Eurasia into the Sandawe. This is not surprising to me, as I've explored this issue with coarser techniques (thanks to Brenna Henn & company for releasing these genotypes). Additionally, there are suggestive results in this paper that the Khoikhoi, a pastoralist Khoisan group, have some genetic influence from East Africans (detected in part via old Eurasian affinities). There have been arguments that pastoralism came to the Khoikhoi not through the Bantu, but via earlier peoples, so this is clearly something that needs to be followed up. Overall, this paper seems to have made more precise and sharpened vague outlines which were already established. Tenuous connections between the Hadza and the Bushmen have been confirmed. Very deep separation between the distinct Bushmen groups is reinforced. And finally, the big chasm between a few groups of hunter-gatherer, and other Africans, is illustrated again. As a final product the Cell paper is rather polished in comparison. The media has emphasized the evidence of archaic admixture into hunter-gather lineages.

This is not that surprising of a finding, other groups have reported the same.

If anything, I suspect that there is some underestimate here, because it seems to me that the statistical methods have a hard going at this age range, and without ancient genomes at that (i.e., the decay of linkage disequilibrium). Dienekes has commented extensively on this, offering up his own theories. I don't have any grand model to propose. Rather, I would suggest that even a "leaky" "Out of Africa" model somewhat misleads the public, by again relegating Africa into a sort of inert black-box. There is deep ancient structure within Africa (e.g., Pickrell et al. confirm that San lineages have been diverged on the order of tens of thousands of years!). Though the dates are not totally clear, it seems possible that the most diverged African groups (e.g., Bushmen) separated from the lineage that led to other populations only moderately more recently than non-African archaics! (e.g., Neanderthals) This may not be multi-regionalism, but it does suggest a very deep history and structure for humanity, as opposed to the "old" model that modern humans as such were the product of a single discrete speciation event ~50,000 years ago. There may be no "behold man!" moment. There's a large section on adaptation within the Cell paper. I'll quote their conclusion, because I have no interest in recapitulating genomic alphabet soup:

We find evidence of selective constraint near genes, and these patterns are replicated in each hunter-gatherer population. We also observe signatures of local adaptation in Pygmy, Hadza,and Sandawe populations, including high locus-specific branch lengths for genes involved in taste/olfactory perception, pituitary development, reproduction, and immune function. These genetic differences reflect differences in local diets, pathogen pressures, and environments. Thus, Pygmies, Hadza, and Sandawe have continued to adapt to local conditions while sustaining their own unique cultures of hunting and gathering.

Surprised that "ancient" hunter-gatherers continue to evolve? I hope not. At this point, let me take a step back. You may wonder: what does this post have to do with Atlantis and the Azores? (or, for that matter Shaka Zulu!) Reading this sort of paper is very interesting to me obviously. The relic hunter-gatherers of Africa can tell us a great deal about our human past. But at some point we need to remember that these are relics. A few years ago I ran into someone who told me that an anthropologist friend explained that the Bantu expansion had been debunked. This sort of thing is why I think cultural anthropology is quite often such a joke discipline. They should stick to their picketing the econ department, and leave the description of the human conditon as it is  to those with a genuine interest. Not only are the Bantu languages a dialect continuum, but the genetic evidence seems rather clear that you can find relative unity across the vast swath of Central, Eastern, and Southern Africa. Though Africans have a great deal of genetic variation, the distance between the various Bantu groups is not that great (e.g., using Fst). And, the genetic distance between Bantus and Khoisan is such that we can conclude that the Bantu expansion into South Africa, for example, was one of demographics, not cultural diffusion. The Xhosa, who are the outer edge of the expansion, and even had integrated clicks into their language, are only minority Khoisan in ancestry. How did this occur? One model might be one of demic diffusion, the sort promoted by L. L. Cavalli-Sforza, and still favored some researchers. In this model you have raw demographic expansion pushing a population outward, diluting their original genetic signal over time on the wave of advance. This is a "thermodynamic" model, not requiring concerted or coordinated state action, as family and clan groups are constantly expanding on the frontier. I do not believe this is how it played out. The Bantu expansion was very thorough. I think Shaka Zulu and his cruel military formations tell us a lot more than small villages of female farmers. No, I'm not suggesting a continent wide confederacy. Rather, the genetic signal from the region of the East-Central Africa lakes is so strong as far south as the Natal that I have difficulty understanding how there could not have been aggressive actions taken against the smaller and less organized hunter-gatherers. Imagine, if you will, the Bantu expansion being driven by men racing forward in Zulu-like military units, clearing territory of hunter-gatherers, killing and starving them out (and taking the occasional girl as a concubine). A Mfecane writ large! What stopped them in the end in Southwest Africa was ecology: the agricultural toolkit of the Bantu was not suitable for the arid or Mediterranean climates of this region. Until then the Bantu knife cut through the hunter-gatherers like butter, wiping them from the surface of the earth. With this as a backdrop the hunter-gatherers, and their genomes, are then like mountaintops flooded by farmers. Like the idea that the Azores are the last fragments of Atlantis, so the Pygmies, Hadza, and Khoisan, are the least of the vast domains of pre-Bantu peoples who once inhabited the southern half of the continent. They show deep genealogical relationships, but they are simply a shadow of what once was, and what has disappeared from the face of the earth. The eternal "Dark Continent" was in fact roiled by a demographic revolution of gargantuan proportions within the last 3,000 years. We may debate whether the farmers or hunter-gatherers are the ancestors of modern Europeans, but we know the answer for Africans. The hunter-gatherers lost. In the time of ancient Egypt Africa to the far South was a very different place, the Bantus did not start moving in large numbers until the collapse of the New Kingdom. When the pyramids were young there was a different world across the vast savannas and plains of East and South Africa, and world we'll never show, and only see through the pinholes provided by the last hunters of the continent.