A marathoner completes a race through the Borneo rainforest, then pays the price with a deadly ailment. 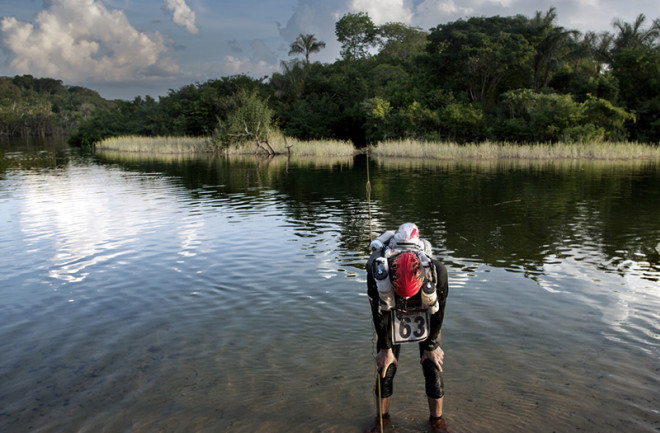 An endurance athlete takes part in an Eco-Challenge in Brazil. Such competitors push themselves to their limits in locales teeming with dangers, including infectious diseases. (Credit: Espen Rasmussen)

Blood-sucking leeches and slim, coiled microbes also abound. Some folks find out about these guys the hard way.

Mary, 46, was a longtime marathon runner from Southern California. She was in my office at UCLA Medical Center for a checkup because she was training for a competition in Borneo, a rugged rainforest island in Southeast Asia. Along with 304 fellow athletes from 26 countries, the petite, fearless blonde was to compete in the Eco-Challenge, a multisport race in which athletes trek through jungles, kayak on muddy rivers and bike over jagged mountains.

I pleaded with her to take precautions for her health given the jungle conditions. “Borneo is swarming with mosquitoes and malaria,” I said. “Won’t you please fill a prescription for malaria pills?”

But Mary was leery of the possible side effects. On a previous trip, she’d suffered scary dreams while taking an anti-malarial medication called mefloquine. Another option was the antibiotic doxycycline. Unlike mefloquine, the body tolerates doxycycline far better, although in some patients it causes stomach pain and worsens sunburns. But Mary was skeptical of doxy, as well.

“If only I hadn’t resisted,” she says now about skipping the doxy.

During the Borneo competition, Mary was deep in a rainforest brushing against foliage. Suddenly she noticed jelly-like leeches clinging to her skin. “Don’t pull too hard!” a teammate warned, but Mary was already tugging. Soon every spot where a leech once clung was a red, oozing sore. Mary barely noticed the cuts as she continued on in the contest. Over the next few days, she and fellow athletes competed in wet conditions that included kayaking on and swimming in the Segama River and its tributaries.

Mary and her team finished seventh in the race, celebrating with high-fives. On the flight back, Mary felt nauseous and hot, and her muscles ached. Upon landing, she drove to an emergency room where a doctor gave her an antibiotic and a shot of Demerol for the muscle pain, and declared her malaria-free. He told her to climb into bed and rest. After her 10 nights under burlap and twigs in Borneo, his order sounded like bliss. But sleep eluded Mary. As her condition worsened, she called a friend who was also a UCLA oncologist. “Denny,” she gasped, “I’ve never felt so sick in my life.”

Three days later, Mary awoke in my hospital, squinting her eyes at a new set of doctors crowded around her bed.

“Here’s an international athlete who recently swam in a jungle,” said Bernie Kubak, an infectious disease physician, to a group of medical trainees. “Now she has a fever of 102 and an inflamed liver and pancreas. What’s your leading diagnosis?”

The Borneo Eco-Challenge competition turned out to be a lepto nightmare.

Having learned of other Eco-Challenge athletes who had fallen ill, Kubak had already picked his: leptospirosis. It’s an infection due to Leptospira, a bacterium passed in animal urine that can live for months in wet conditions. Eyeing Mary’s skin, Kubak could easily picture leptospires drilling into her many open wounds, including those from the leeches. He puzzled over how he could prove it was the bacterium while watching the drip of the intravenous ampicillin, another antibiotic he had added to Mary’s twice-daily doxycycline.

Because several drugs were in her system, culturing Mary’s blood now to test for lepto would be useless. So Kubak decided the best way was to use a blood sample from before she received treatment. He made several phone calls, and soon leftover vials of Mary’s blood were on their way from a hospital emergency room to the lab of David Haake, an internationally known leptospirosis researcher at the West Los Angeles VA hospital.

Haake was not optimistic. He was supposed to coax delicate germs to grow from this week-old, refrigerated serum? But days later, he spied a faint zone of life in a flask of nutrient agar. Under a microscope, Haake examined the thin, motile corkscrews and later subtyped the bugs. Their genetic fingerprint matched Leptospira weilii, a species exclusive to Southeast Asia.

Asia looms large in the annals of leptospirosis. In 1915, Japanese microbiologist Ryukichi Inada first found leptospires in the kidneys of rats. Spreading through the animals’ urine, the bacteria could survive for months in stagnant water and wet soil. Eventually, he and other scientists found the wily microbes in cows, pigs, dogs and other mammals.

But rats and mice will always remain the principal reservoir of leptospirosis, according to Haake, who is currently testing an oral vaccine in hamsters, hoping to help halt the role of rodents in the disease’s spread.

In the meantime, humans diagnosed with leptospirosis face a more urgent problem. Whether they live in a tropical forest or an inner-city slum, most are never diagnosed and treated with antibiotics. Although many people recover uneventfully, every year 60,000 pay the ultimate price, often dying with lemon-yellow eyes, rust-red urine, failing kidneys and hemorrhaging lungs.

The Borneo Eco-Challenge competition turned out to be a lepto nightmare. Besides Mary, about 80 other competitors contracted the condition. Fortunately, none of them died, but as with Mary, more than one-third required hospitalization. According to a report by the Centers for Disease Control and Prevention, the Eco-Challenge “was the first recognized international leptospirosis outbreak associated with the increasingly popular activity of adventure travel.”

Since then, many more cases involving adventure racers have been documented around the world. In 2009, 20 lepto infections were identified in Tchimbé Raid marathoners competing through the tropical forests of Martinique in the Caribbean. Three years later, an outbreak followed a triathlon on Réunion Island in the Indian Ocean.

Rainy conditions can create the perfect environment for the microbes by raising water tables and muddying the ground. In Borneo and Martinique, record downpours preceded the ill-fated races. The CDC pointed out that many of the athletes sickened in Borneo had swum in the Segama River and its tributaries, their open sores an easy way for the bacterium to enter bodies.

Bottom line: The more medical experts learn about leptospirosis, the more they favor guarding against it with weekly doses of doxycycline during high-risk travel.

For two to three months after the brunt of the illness, Mary had lingering fatigue and other symptoms. But eventually she was strong enough to resume her standard weekend fare of long bike rides and runs, and she returned to international adventure contests.

Her experience in Borneo will always stand as a personal high. “How often can you come around a corner on a mountain bike and see an elephant?” she asks. But it’s also a powerful lesson. Not only did the event showcase spirit and drive among athletes, it also revealed a serious vulnerability of competing in natural surroundings.

Mary has no regrets about what happened. “Everything has risk,” she says. “If you fear the unknown and don’t pursue adventure, you’re missing out on such amazing opportunities and experiences.”

Claire Panosian Dunavan is an infectious diseases specialist at the University of California, Los Angeles. The cases described in Vital Signs are real, but patient names and some details have been changed.