According to search engine traffic one of the most popular posts on this weblog has to do with the genetic background of Ashkenazi Jews. That is, those Jews whose ancestors derive from Central & Eastern Europe, and the overwhelming number of Jews in the United States. The genetic origins of this group are fraught with politics naturally. With the rise of biological science the characteristics of Jews were used as a way to differentiate them as a nation apart in more than a cultural and religious sense. After World War II other researchers attempted to show that Jews were not genetically distinct with relatively primitive blood group assays. Rather, they were the descendants of converts. More recent genetic work has given mixed results. The reasonable inference then is that Jews themselves are a population with a complex history, and that complexity is manifest in their genetics. A new paper explores these issue in more detail, Genomic microsatellites identify shared Jewish ancestry intermediate between Middle Eastern and European populations:

The general results of the paper are well illustrated by the figures. The figure below shows the putative ancestry of individuals assuming a K number of ancestral populations. As you can see, the Jews within the sample are placed between Middle Eastern and European groups. At K = 5 and K = 6 the relationship between Jews and Palestinians shows up; a common ancestral population which parted aways at some point. 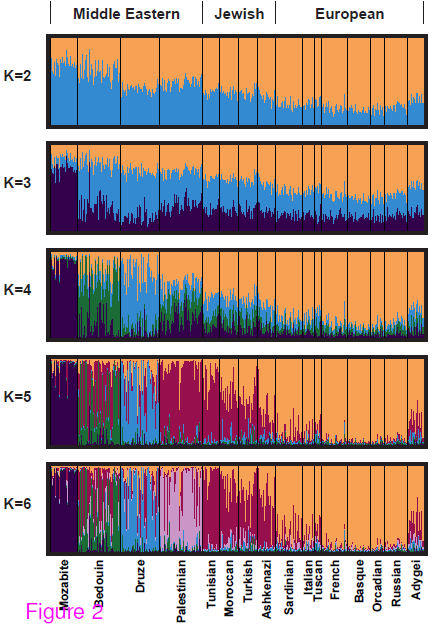 And here's a neighbor-joining tree. The Jewish groups in red, Europeans in blue and Middle Eastern groups in olive. 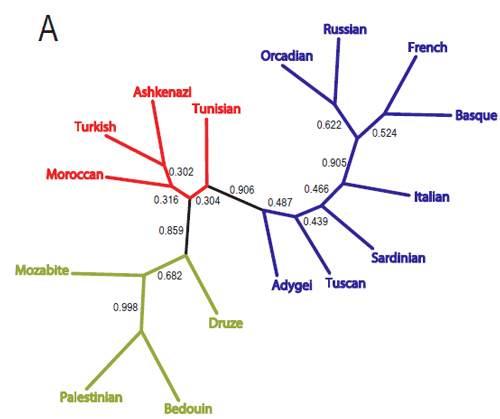 Now here are Jews compared to various populations. Jews are in red. I've reedited and labelled for clarity.

From the conclusion of the paper:

This paper clarifies and puts into sharper focus what we knew, and leaves open more details for future research. 1) Jewish populations do have a common ancestral affinity. 2) But, that affinity is complemented by admixture with the populations amongst whom the Diaspora settled. 3) There is a suggestion that in the case of Ashkenazi Jews the European contribution was more likely to be from southern, and not northern, Europe. This is somewhat surprising in light of the fact that the Ashkenazi group crystallized during the medieval period in northern Europe, amongst German and Slavic speaking peoples. These data would imply that in fact there was a relatively strong separation between these groups and the Jews, at least when it came to gene flow into the Jewish group (other data from Poland does show the effect of Jewish assimilation into the gentile majority). Therefore, the admixture may have occurred within the bounds of the former Roman Empire, during the Imperial or early post-Imperial period. 4) The close relationship of Jews to Palestinians is not surprising. Jews are reputedly a Levantine population by origin, and the historical and genetic evidence points to Arabicization in the Levant and Mesopotamia as having occurred through acculturation, and not population replacement. Many of the Palestinians are likely of original Jewish or Samaritan origin, though I would guess that they were likely at least nominally Christianized during the Byzantine persecutions of the 6th century. 5) There remain questions as to which groups the Ashkenazi Jews admixed with, and when they admixed. There should be a different pattern of genetic variance if the admixture event was early and ceased, or if it was constant and gradual gene flow. The phylogenetics implies the former, because of the lack of much allele sharing with northern Europeans specifically, amongst whom the Ashkenazi Jews were resident for the past ~1,000 years. Within the text of the paper there are also hints of possible relationships to a population of the Caucasus, opening an avenue for some validity of the Khazar hypothesis. There have been other data which also point to the Khazar hypothesis. The origins of the Jews then likely are complex. Many of the confusions and muddled points will likely be clarified soon with more data and analysis. At Dienekes' some observed that a greater number of Mediterranean populations would have been useful. What if the Jewish admixture event tended to occur with Greeks in Alexandria and in the cities of Asia Minor? That would explain the proximity to Italians, but lack of overlap with other European groups. Citation: BMC Genetics 2009, 10:80 doi:10.1186/1471-2156-10-80 (H/T Dienekes)