As Seen on Television: The Dawn of Modern Medicine 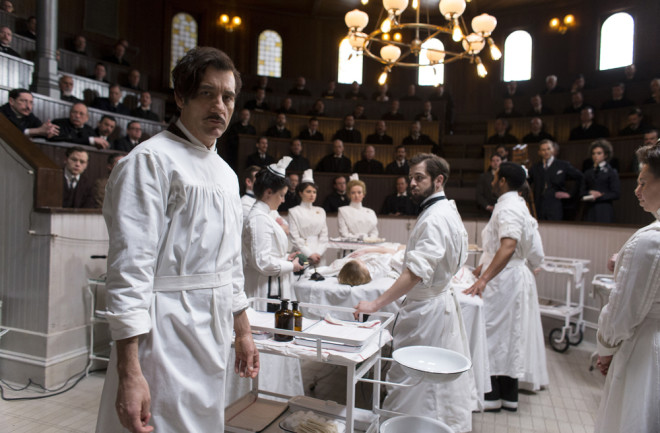 To keep The Knick historically accurate, on-set surgical advisor Dr. Stanley Burns (pictured below) relied on his expertise and his massive collection of historic medical photos stored at The Burns Archive in New York. (Credit: Paul Schiraldi/HBO) They scrub in according to a strict protocol. All instruments are sterile, the patient is put to sleep, and an incision is cut and held open with retractors. Moving into the abdominal cavity, surgeons clamp bleeding arteries and cauterize tissues meticulously to prevent blood loss while also making the surgical field easier to see. Thus far, it seems just like surgery today, but for the numerous people overlooking from elevated theater seats, dressed in formal Victorian outfits. That’s the operating room setting on the Cinemax period medical drama, The Knick. There are a host of other details that make the setting look ancient, but the differences from modern surgery are most striking when things start going wrong. For instance, the patient’s heart rate becomes rapid, then erratic, and the surgeon knows this only because of a nurse listening to the patient with a stethoscope. She can't report blood pressure, because no device is set up to measure it — there are no monitors of any sort. Those devices don’t exist in the era when The Knick is set, nor would they help much, since the time period denies doctors even the most basic tools of resuscitation. The year is 1900, when many basic principles of surgery have been developed, but safe transfusions, electrocardiography, and other vital tools still lay several years into the future.

Turn of the 20^th century medicine was characterized by rapid introduction of a plethora of devices, procedures, and techniques. This has given writers and producers of The Knick a wealth of material for creating dramatic stories, which they have done remarkably during seasons one and two. Still, it’s challenging for writers to get things right when it comes to the details of a surgical procedure. The same goes for the history of who did what and when. With these issues in mind, I spoke with Dr. Stanley Burns, a Manhattan general surgeon and ophthalmologist. Having authored dozens of books on the history of surgery and medicine based on more than a million photographs and other documents that he has collected and housed at The Burns Archive, Burns is the official surgical advisor both to The Knick and to the PBS miniseries Mercy Street. Though set during the American Civil War less than four decades before The Knick, Burns has helped PBS to make sure that Mercy Street portrays an era of medicine that looks strikingly more primitive.

Stanley Burns and Clive Owen on the set of The Knick. (Credit: Mary Cybulski/HBO) The reason for the rapid advances in surgery between the eras of the two shows has a lot to do with William Stewart Halsted. A giant in the history of surgery, Halsted is the basis for The Knick’s lead character, Dr. John Thackery (Clive Owen), chief of surgery at Knickerbocker Hospital in New York City. Starting in the 1880s, Halsted introduced various principles into surgery that we take for granted today. Because the evolution of surgery in that time period is a main focus of The Knick, the producers and writers really wanted to get the details right and that’s why they recruited Burns.

Not Always Hitting the Mark

It sounds like a good goal, but getting the details right is not always the top priority for TV drama, even for shows that pride themselves on being all about science. Many years ago, when I was taking a course in space medicine, an instructor Michael Barratt –now astronaut Michael Barratt– gave a lecture on the concept of sudden decompression of a spacecraft cabin. Your lungs are like balloons, so if the ambient pressure drops suddenly, they can overinflate, causing any of a variety of injuries, the worse being a cerebral arterial gas embolism (CAGE). This can be fatal, but the good news is that over-inflation will happen only if you are holding your breath. It’s a very important point that is taught to anyone who might be at risk for a pressure change, whether they are astronauts or SCUBA diving. But several years earlier, Star Trek The Next Generation had sought Mike’s advice on that very topic. In an episode called Disaster, chief medical officer Beverly Crusher (Gates McFadden) and chief engineer Geordi LaForge (LeVar Burton) were trapped in a cargo bay that they had to depressurize to put out a fire. Of course, Mike had told the writers of the importance of not holding one’s breath. But somewhere between Dr. Barratt’s advice and the final editing of the script, prior to depressurizing the chief medical officer of the Enterprise ended up saying “Geordi, we’ll be OK if we hold our breath.” Watching The Knick, I wondered whether Burns might have been caught in a similar conflict when medical correctness came up against something that the director or a writer wanted to do for the sake of drama. But he experienced nothing of the sort. “It actually worked the opposite,” says Burns. “They listened to me and I really mean this as a compliment to the writers. They actually adjusted the script based on my input.”

This is not to say that The Knick has no anachronisms. For instance, during first season, Thackery knows that adding citric acid to blood delays coagulation, when actually this was not discovered and published until a few years later. Going through the episodes, you could find potential problems with little details like that Making The Knick historically accurate does not require the writers to leave no mysteries at all. “It’s not a documentary,” Burns noted. Every detail does not need to be filled in, so long as things that the characters say and the operations they perform are plausible for the time period. The emergence of modern medicine took place over a roughly 30-year year period, so timelines need to be squeezed to keep things dramatic.

(Credit: Paul Schiraldi/HBO) “I believe the Progressive Era (1890-1920) was the greatest time in the history of advances for the working and middle class,” Burns told me. “This has a lot to do with inventions that made everyday chores much easier, the home more comfortable, and life more interesting.” Going along with all of that new technology for the middle class, Burns listed a string of medical advances that also brought health care into a new age. “Think about it; this was the time when they learned what caused the diseases that were killing so many people. Poliovirus was isolated during this period. The organisms causing yellow fever and malaria, and the insect vectors carrying the causative organisms, were discovered during the 1880s,” he said. “But it was not until the Progressive Era that scientific and medical communities widely accepted those agents as the cause. Understanding infectious agents was a critical.”

In one episode, Thackery intentionally infects a patient with Plasmodium, the parasite that causes malaria. Why? Because, Thackery lacks the arsenal of antibiotics that we have today to fight Treponema pallidum, the bacterium that causes syphilis. However, he knows that T. pallidum can’t survive above a certain temperature. By causing a very high fever, malaria would kill the T. pallidum, curing her syphilis. Then, it would just be a matter of giving her quinine to cure the malaria. Known as pyrotherapy, it was a real treatment for syphilis in those days that often worked. Dovetailing with the growing understanding of diseases in the Progressive Era were advances in medical technology. “This is the period when the X-ray became a diagnostic and therapeutic tool and when surgical specialties were established,” says Burns. Two turn-of-the-century technical advances featured on The Knick are the X-ray machine, invented in the late 1890s, and blood transfusions. In 1900 in Vienna, Karl Landsteiner figured out the ABO blood groups, knowledge of which was required to avoid fatal reactions.

Behind the scenes of The Knick. From left, are Michael Angarano, Juliet Rylance, Steven Soderbergh and Greg Jacobs. (Credit: Mary Cybulski) One episode of The Knick has Thackery transfuse a girl to death, because he hasn’t read Landsteiner’s paper. While such an occurrence in New York in 1900 is fictional, it does not make the episode inaccurate, since it is something that could have happened somewhere in that year. “We have evidence that every operation and procedure depicted on The Knick, happy ending or not, could have been performed in 1900 the way you saw it on the show,” Burns explained.

From The Burns Archive

The transfusion, for example, was arm-to-arm, which was one way that it could have been done. And, if you were wondering why they inserted a breathing tube through a patient’s mouth in one emergency situation, yet put it though a hole that they cut into the throat (called a tracheostomy) on another patient in a similar situation, Burn’s has evidence in his photographic archive of it being done both ways. Much of that photographic evidence comes from a multivolume document called Stereo-Clinic. It consists of photos of step-by-step surgical procedures that were created and organized during the early 20^th century. Placed in a stereoscopic viewing device, they provided surgeons with a 3-dimentional view of each step and surgeons would actually look into the viewers for guidance during an operation. In addition to serving as a primary historical source, the Stereo-Clinic was even shown on The Knick.

(Credit: Paul Schiraldi/HBO) Indeed, because of the numerous photos in The Burns Archive, the Stereo-Clinic in particular, there were occasions when making an incision in one direction or another, or suturing one way or another, would have been historically accurate. “For many operations, there was no standard way of doing it,” Burns emphasized. Thus, in many cases it was easy for him to keep things historically accurate without conflicting with what the director preferred in terms of camera angles or having the characters operate in ways that looked particularly dramatic. That put him in a position a little different from astronaut Barratt’s experience with the Star Trek writers, but then again Burns is more than a consultant asked to review one or two details of a script. Rather, he is completely part of the team for The Knick and for Mercy Street too and that makes it pretty serious work. “It’s every day on the set from 7am to 7pm,” he noted. “It’s not as if you say ‘let’s go to the studio and see what they’re doing.’” And maybe it’s because Burns was chosen as a team member, not merely an advisor, that The Knick has been so accurate on every aspect of surgery and the history of medicine too.