Artificial Wombs: How Sci-Fi Could (One Day) Meet the NICU

From mouse embryos in jars to fetal lambs in plastic bags, scientists are moving forward with animal trials that could someday help humans. 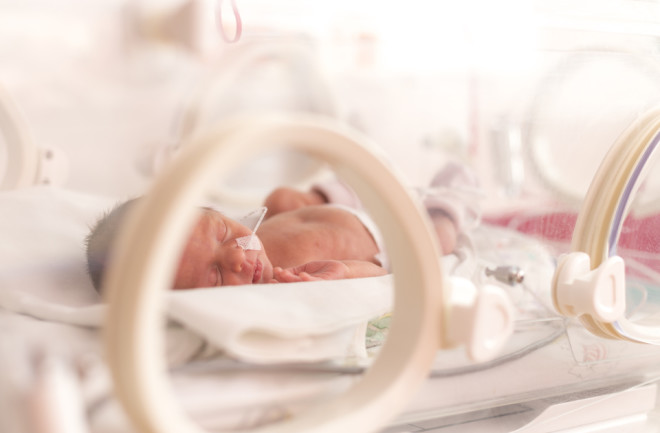 It sounds like something out of science fiction: fetuses suspended in fluid-filled transparent bags, their blood flowing through a network of tubes hooked up to machines. But it’s not a speculative look at a dark future — research into artificial wombs is already underway, as a means of hopefully one day saving babies born too soon.

The idea of artificial wombs might conjure up scenes from movies like The Matrix, but it’s something humans have been mulling over for a century — English biologist J. B. S. Haldane coined the term “ectogenesis” (from the Greek for “outer” and “origin”) in 1923, and the concept played into the 1932 novel Brave New World. Scientists at Sweden’s Karolinska Institutet published diagrams on artificial wombs in 1958, and researchers in Japan and Korea made major strides in the coming decades.

Science fiction often depicts babies grown in artificial wombs from start to finish, but in reality, much of the research focuses on later stages of development, when fetuses are on the brink of being able to survive outside the womb. That threshold has moved as neonatal medicine has improved and younger and younger pre-term babies are surviving.

“Babies that were once wrapped in a blanket and put in a cupboard to die are now going home with Mum in 2-3 weeks,” says Matt Kemp, the head of the perinatal research laboratories at Australia’s Women & Infants Research Foundation. “The new cutting edge of viability is around the 22-week threshold, when the fetus’s lungs are developing.” About 20 percent of preemies born at 23 weeks survive, usually with major complications; by 25 weeks, that number jumps to nearly 80 percent.

Kemp, along with his colleagues at Japan’s Tohoku University, works with fetal lambs, since their development resembles that of humans. The researchers have built artificial wombs that can support lambs that are developmentally equivalent to a 24-week-old human fetus. (There are no artificial womb studies involving human fetuses.)

According to Kemp, the artificial wombs look “a bit like a wine bladder” — the plastic bags that line containers of boxed wine. But instead of containing a Zinfandel blend, these bags hold a liquid that mimics amniotic fluid, along with a hairless, pink lamb fetus about half the size of a smartphone, with tubes hooked up to its umbilical cord.

While the set-up might look strange and futuristic, says Kemp, “essentially all you’re doing is oxygenating a very small fetus.” In utero, the fetus’s heart pumps deoxygenated blood into the placenta via the umbilical cord. While the fetal blood is in the placenta, it picks up oxygen from the parent’s blood. The newly oxygenated fetal blood then goes back through the umbilical cord to the fetus.

If a fetus is born too early, its small, stiff lungs aren’t yet able to take up oxygen from the air. That’s where artificial uteruses might someday come in. In the sheep trials, the fetus’s heart pumps deoxygenated blood through a tube in its umbilical cord to a machine that oxygenates it. The oxygen-rich blood then flows back into the fetus’s body through another tube in the umbilical cord. In lambs, the technology has been able to keep the fetus alive through the risky developmental stage when the lungs aren’t yet strong enough to go on a ventilator — the 23-24-week mark in humans.

At present, there’s not much hope of working with fetuses significantly younger than that. “Twenty-one weeks is a hard floor for this technology,” says Kemp. “The basis of it is, you have to put a tube in something and create pressure to shift the blood through that tube through an oxygenator. Smaller fetuses need smaller tubes, which increase resistance, in a fetus that’s increasingly immature and unable to manage increased resistance.”

Kemp and his fellow researchers don’t necessarily see this limit as a problem, since their goal isn’t to find a way to grow babies from start to finish in an artificial womb. “It is a hugely important point that we do not intend to challenge the currently accepted standard for a viable infant. The challenging age that we're trying to offset is that 23- to 24-week baby who is faced with such a challenge of adapting to life outside of the uterus, on dry land,” says Emily Partridge, a researcher at the Children’s Hospital of Philadelphia, in a video about her and her colleagues’ work on artificial wombs for lamb fetuses.

Other researchers are working at the other end of the developmental spectrum, like Jacob Hanna’s team at Israel’s Weizmann Institute. They focus on the earliest stages of embryonic development, when organs first form. Again, no human embryos are involved in the research — Hanna and his team work with mice. In March 2021, Hanna and his colleagues announced that they’d raised mouse embryos about a third of the way through gestation outside of a uterus. He says of the time gap between his research and that of his colleagues working with later-term lamb fetuses, “The question is, with these two types of research, which are on both ends, will they ever meet?”

Kemp is skeptical that the two disciplines will be bridged any time soon —  he says that the challenges of complete ectogenesis from start to finish as opposed to just focusing on helping a fetus that’s already largely formed, is “sort of like saying, ‘Well, you’ve built an airplane, what’s stopping you from building a rocketship to Mars?’” He says that unless there are researchers out there “sitting on an Aladdin’s cave of data,” he can’t see ectogenesis moving into clinical use for humans within the next decade.

Even if scientists someday do find a way to find a way to grow babies in an artificial womb from start to finish, there’s the lingering question of, should we? The concept has advocates who hope that an alternative to biological pregnancy could help people without uteruses have children or might eliminate some of the inequality associated with motherhood. But Chloe Romanis, a professor of biolaw at Durham University, is more cautious, and not necessarily for the dystopian reasons sci-fi warns against. She notes that shifting boundaries of fetus viability might call abortion rights into question, and artificial wombs might not be accessible to the people who need them most.

“We know that premature delivery is associated with stress in pregnancy. We also know that it’s structurally associated with being poor, and also being structurally discriminated against,” says Romanis. With a treatment as wildly expensive as an artificial uterus is likely to be, according to researchers like Kemp, Romanis stresses the importance of making sure that poor people and people of color get to reap the benefits of these technologies. On the flip side, she’s concerned that societies might become selective in who they deem a fit gestational carrier.

“This technology might do amazing stuff and I think we should welcome it, but also, how do we do it in a way that actually shrinks the gap, rather than widens it, in terms of the inequality between different kinds of women?” she muses.

Romanis also notes that the concerns of gender inequality wouldn’t evaporate simply because a new reproductive technology becomes available. “We have all sorts of miraculous technologies. We have Hoovers — that doesn't change the fact that it's primarily people who are gendered as women that push Hoovers.”

Kemp agrees that while artificial wombs might one day save the lives of premature babies, they’re not a panacea to the inequality surrounding childbirth and childrearing: “The hard reality is that if you want to improve reproductive and gender equality, it’s very simple — you need to fund public health education programs. Those give you a much better return on investment than fancy technology.”