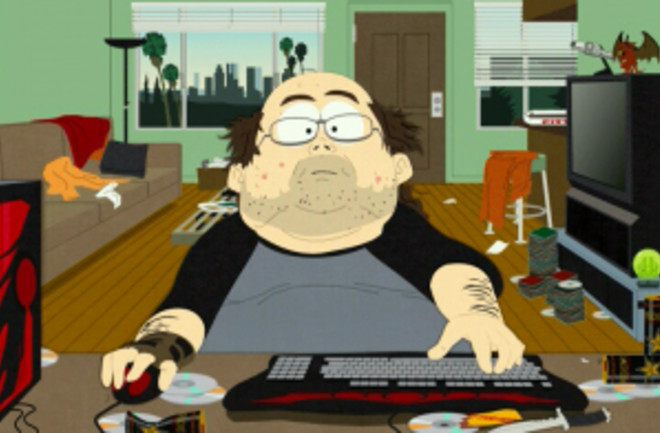 Photo: southpark.wikia.comYou're probably familiar with the stereotype of people who play online games like World of Warcraft: overweight, nerdy men who spend days online without leaving the house. But how accurate is this description? Here, a group of German researchers addressed this vital question by conducting telephone interviews with groups of gamers and non-gamers. They found that, while many players do not fit this gamer stereotype, those who spend the most time gaming online are more likely to fit the stereotype. Interestingly, they also found that the average gamer was in his 30s, contrary to the image of teenagers as being the primary consumers of video games. I guess that particular stereotype is simply 15 years out of date.Unpopular, Overweight, and Socially Inept: Reconsidering the Stereotype of Online Gamers. "Online gaming has become an activity associated with a highly specific, caricatured, and often negative image. This "stereotype" has permeated the collective consciousness, as online gamers have become common caricatures in popular media. A lack of comprehensive demographic inquiries into the online gaming population has made it difficult to dispute these stereotypical characteristics and led to rising concerns about the validity of these stereotypes. The current study aims to clarify the basis of these negative characterizations, and determine whether online video game players display the social, physical, and psychological shortcomings stereotypically attributed them. Sampling and recruiting was conducted using a two-stage approach. First, a representative sample of 50,000 individuals aged 14 and older who were asked about their gaming behavior in an omnibus telephone survey. From this sample, 4,500 video game players were called for a second telephone interview, from which the current data were collected. Only those participants who completed all of the questions relating to video game play were retained for the current analysis (n=2,550). Between- and within-group analyses were enlisted to uncover differences between online, offline, and nongame playing communities across varying degrees of involvement. The results indicate that the stereotype of online gamers is not fully supported empirically. However, a majority of the stereotypical attributes was found to hold a stronger relationship with more involved online players than video game players as a whole, indicating an empirical foundation for the unique stereotypes that have emerged for this particular subgroup of video game players." Related content: NCBI ROFL: First-person shooter games as a way of connecting to people: "brothers in blood".NCBI ROFL: The effect of social support derived from World of Warcraft on negative psychological symptoms.NCBI ROFL: The ideal elf: identity exploration in World of Warcraft.