Though the name is misleading, growing pains have been a known medical phenomenon in kids for 200 years. Here's what parents should know about diagnosing and treating the mysterious ailment. 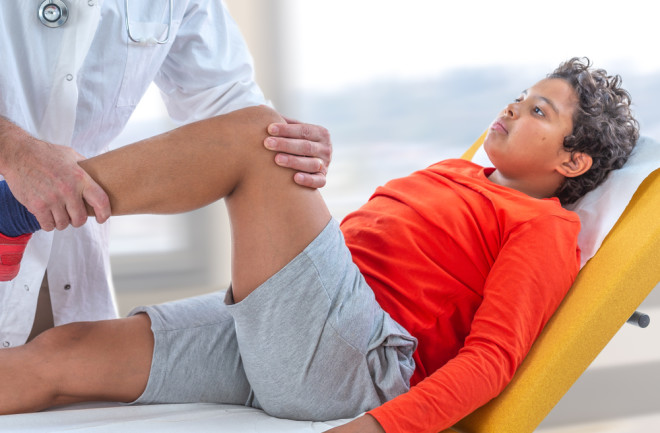 While I was growing up in the ’90s, my parents had a way of mollifying frequent aches and pains that arose in my sensitive bones and muscles: “It’s just growing pains.” Essentially, childhood taught me that these so-called growing pains could be attributed to just about any vague throbbing. And I’m hardly alone.

“My parents said the exact same thing,” says Rebecca Carl, a pediatrician who specializes in sports medicine and orthopedics at Lurie Children’s Hospital of Chicago. “I could fall and break a bone and my parents would be like, ‘Growing pains.’”

It should go without saying that broken bones are not growing pains. And in case you're wondering, growing pains are a real thing — though the term itself is a misnomer.

Growing pains occur in nearly one out of four children, based on the research that Carl has reviewed and conducted during her career. While the medical world still doesn’t know what triggers them, physicians have honed in on some possible causes and helpful treatments. They've also highlighted some misconceptions about these pangs of youth.

The Origin of 'Growing Pains'

The term first appeared in medical literature nearly 200 years ago, when a French physician, Marcel Duchamp (not the French-American artist), named this common syndrome in kids. His description of recurrent leg pains in children was included in his book, Maladies de la Croissance, or “diseases of growth,” in 1823.

His description of recurrent leg pain in children is consistent with what many doctors and parents still hear today, particularly from kids between the ages of 2 and 12. But research has failed to connect these pains to periods of sudden, rapid growth, as you might expect from the name.

The temporary aches or throbs typically occur in the legs — especially near the shins and calves or behind the knees or thighs. They also seem to strike at night and after excessive activity.

In-depth studies on growing pains are lacking. This is partly because the syndrome seems benign, with limited concerns about impacting other aspects of health, Carl says. Medical research money tends to go toward more threatening maladies.

One 2015 study evaluated 120 Turkish children to test whether vitamin D deficiency plays a role in growing pains. Researchers reported observing positive results in participants who took vitamin D supplements. However, the study lacked a control group, which makes the results less reliable. “That could be placebo effect,” says Carl, who was not part of that study but has published her own findings in other papers. Further studies are needed to confirm the theories surrounding vitamin D.

Based on her reviews of published research and experience treating patients, Carla considers it to be a muscular issue. “It’s so similar to a cramp that it seems to be related to muscle,” she says. And yet, the details behind why cramping occurs in human bodies also remain fuzzy in medical research.

In addition to a vitamin D deficiency, other potential causes that have been studied include bone growth changes, foot positioning, fatigue and differences in pain perception, according to Sarah Ringold, a pediatric rheumatologist at Seattle Children’s Hospital. There could also be a hereditary component. “There is some indication that growing pains may run in families,” Ringold says. “Parents of children with growing pains may recognize the symptoms from their own childhood.” None of this research has landed on firm conclusions.

As to whether these pains are conceived of in the mind, Carl says that’s unlikely. “Mental health can affect how we perceive pain,” she says, noting stress and anxiety as two common examples. “We do not think this is purely related to psychological issues.”

Growing pains don’t generally need clinical attention. But making that judgment as a parent or caretaker requires knowing your child well and being able to identify the ailment.

An episode of growing pains can range from mild to severe, often includes both legs and typically lasts between 10 and 30 minutes (and sometimes more than an hour), according to resources from The Cleveland Clinic. Carl says pediatricians can be a great resource for parents wanting to learn more, including how to identify and treat growing pains.

A key thing to assess is whether your child has issues beyond isolated pain in the legs. Red flags that could signal something other than growing pains: limping, avoidance of daily activities or other signs of illness, such as a fever. Instances of pain also should not be regularly waking a child at night.

For home remedies during growing pains flare-ups, physicians recommend gentle stretching of the muscles, applying heat to relax the muscles and gently massaging the area.