Antarctic lake hints at a world of virus-attacking viruses 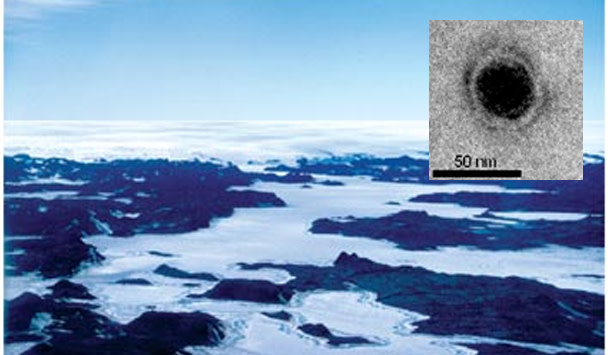 At first glance, Antarctica’s Organic Lake looks hostile to life. Its water is expectedly cold, extremely salty and starved of oxygen. But look at it under the microscope, and you’ll see teeming masses. There are bacteria and algae. There are viruses that infect the algae. And most astonishing of all, there are viruses attacking the viruses. These are virophages – literally “virus eaters” – and they are third of their kind to be discovered. The first virophage, known affably as Sputnik, was discovered by Bernard La Scola and Christelle Desnues in 2008. It was an incredible find, and the first time that anyone had seen a virus targeting another virus. La Scola and Desnues found Sputnik in the unlikeliest of places – the dirty water of a Parisian cooling tower. There, it targets one of the world’s largest viruses, known as “mamavirus”, which in turn infects an amoeba. Mamavirus creates giant viral factories inside the amoeba to make more copies of itself. But Sputnik hijacks these factories, replicating itself at the expense of its larger host. It doesn’t directly infect mamavirus, but it exploits it enough to severely slow its reproduction. Earlier this month, Matthias Fischer and Curtis Suttle discovered a second virophage, known as Mavirus. It too targets another giant virus called CroV, with the largest viral genome ever found. And CroV in turn infects a type of plankton called Cafeteria. Mavirus behaves in much the same way as Sputnik – it can’t exist within Cafeteria on its own and it hijacks CroV’s factories to make more Maviruses. Now, Sheree Yau from the University of New South Wales has found a third virophage, and that’s just the beginning. Her experiments have uncovered the hints of a global virophage club that spans at least four continents. Yau’s team collected samples from the surface of Organic Lake and analysed all the DNA within them using a technique called metagenomics. It’s a shoot-first-ask-questions-later approach – you sequence everything in the sample and piece together into individual genomes later. Yau found that the lake was dominated by a group of (you guessed it) giant viruses called phycoDNAviruses that infect algae. These viruses (PVs) are major players in the oceans. They control the growth of algae, preventing them from running amok and creating harmful blooms. And if blooms form, the viruses can also bring them under control. Amidst Yau’s clutter of genes, she also found several sequences which matched the tiny genome of Sputnik, all hailing from a single circular genome. It was another virophage, and Yau gave it the fitting name of Organic Lake virophage or OLV. Its genome is larger than Sputnik’s but it shares several of the same genes, which fulfil essential roles. OLV’s genome also includes genes that it picked up from its PV partners. That’s turning out to be a recurring trend for this group – they are genetic chimeras that swap genes with other species. Sputnik’s genome, for example, is a mish-mash of genes from other viruses, bacteria and even more complex cells. Mavirus’s story is even more complicated. Its genes look at lot like a group of jumping genes called “Maverick transposons”. These sequences can independently hop around the genomes of all sorts of complex cells, including our own. As they jump, transposons can edit genes and change the way they are activated. That makes them a potent evolutionary force, and the Maverick group could have evolved from ancient relatives of Mavirus. If that’s true, virophages aren’t just a niche group that infects amoebae in water towers or algae in frozen lakes – they could wield an important influence on the evolution of life. Indeed, Yau’s work at Organic Lake was just scratching the surface. Searching through other databases, she found sequences that matched those of OLV from nearby Ace Lake, also in Antarctica. She found them in Punta Cormorant lagoon in the Galapagos Islands. She found them in Delaware Bay estuary in New Jersey. And she found them in Lake Gatun, a freshwater lake in Panama. There is a world of virus-eaters just waiting to be studied and discovered. Reference: Yau, Lauro, DeMaere, Brown, Thomas, Raftery, Andrews-Pfannkoch, Lewis, Hoffman, Gibson & Cavicchioli. Virophage control of antarctic algal host–virus dynamics. PNAS http://dx.doi.org/10.1073/pnas.1018221108More on virophages: The virophage – a virus that infects other viruses