Today is World TB Day, commemorating Dr. Robert Koch’s groundbreaking 1882 discovery of the organism that causes tuberculosis. At the announcement of his research to the public, he declared, “If the importance of a disease for mankind is measured by the number of fatalities it causes, then tuberculosis must be considered much more important than those most feared infectious diseases, plague, cholera and the like.” Thirteen years later he would be awarded the Noble Prize for his discovery. 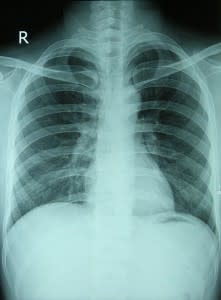 A normal x-ray of the chest. Image: Zhang zhugang. Click for source.

The groundwork for medical treatment commences once a disease-causing organism has been identified, and tuberculosis was no exception to this rule. Koch’s pioneering work in microbiology paved the way for the discovery of antibiotics in the mid-twentieth century. Today, tuberculosis is treated with a regimen consisting of four different antibiotics over a period of months. But for decades an altogether different method of treating tuberculosis was used: deliberately collapsing a lung by inserting materials such as animal fat, solid paraffin wax, bone, olive oil, silk, and gauze.

This “plombage” therapy was in use for decades from the late 1880s until well into the 1950s. The Body Horrors blog covered this radical therapy a few years back:

In 1891, the French surgeon Théodore Tuffier pioneered the first surgical procedure targeting tuberculosis. “Plombage thoracoplasty” consisted of excising a chunk of the fourth rib in the back, deflating the lung, and then inserting into the upper thoracic cavity a foreign, inert material, a so-called “plombe” named after the lead bullets that were initially used. The goal? To deliberately collapse and compress a lobe of lung, and with it, its nidus of festering infection.

What little is known about plombage therapy is largely due to case histories of patients seeking medical care for complications from the surgery decades after their therapy. And, as you can image, there were myriad long-term effects to filling one’s lungs up with ping pong balls and bits of wax. The literature is riddled with case studies of patients presenting with major airway obstruction, organ damage, pneumonia, abscesses, and even cases of malignancy caused by long-term irritation and inflammation caused by the plombe.

All cases are variants of the same clinical presentation: an elderly patient complaining of shortness of breath, of vague pain and of malaise. An x-ray reveals a complete surprise to the attending physician, an anomaly wildly beyond the expectations of the typical anatomical variant: dozens of balls in the thorax. The patient, upon hearing of this shocking and unexpected discovery, suddenly recalls receiving what was considered the treatment de rigueur for tuberculosis just half a century ago, one that involved the very reasonable-sounding insertion of plastic balls into one’s thoracic cavity.

Just in time for World TB Day comes a case report from the New England Journal of Medicine of an 86 year old patient presenting to an emergency room with chest pain. An X-ray showed a surprising finding: a large opacity in her upper left lung. After delving into her past medical history and discovering that she had been treated for tuberculosis in the past it was determined that she had been a past recipient of plumage therapy with oil. The diagnosis? Oleothorax or oil in the pleural cavity. Head over to their page to check out the fascinating chest x-ray and read more about this rare incidental finding.

Find out more about the unusual history of plombage in Quackery & Poison: A Ballsy Procedure.

Even elephants can get tuberculosis. The Portland, OR zoo battled their own epidemic a few years back.

Images Unfortunately, many of the clinical images of patients with plombage have copyright restrictions. Please check out these sites to see some x-rays and MRIs of plombage therapy. You won't regret it. "Plombage" at Radiopaedia.org

"Plombage Cavities" at the New England Journal of Medicine