An Atlas of Our Cells

Hundreds of researchers team up to map the human body's trillions of cells, and how they all get along. 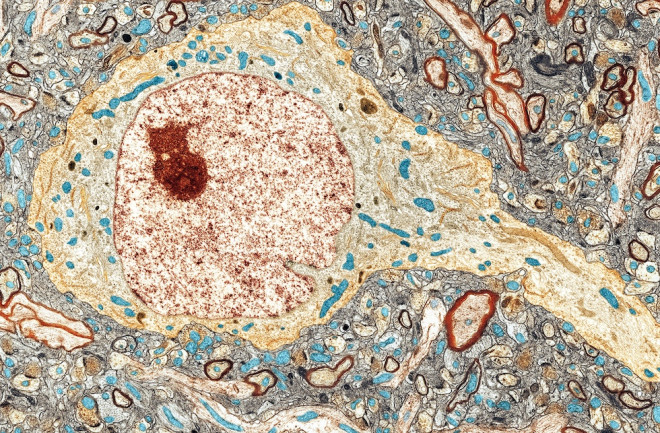 When Robert Hooke peered through a primitive microscope in the mid-17th century, he set in motion a revolution. Today’s understanding of the fundamental structure of living organisms began when he examined thin slices of cork and saw tiny walled compartments that looked like a monk’s dwelling: He called them cells.

Subsequent advances over the centuries deepened our understanding of these structures, which we now know to be the basic unit of life. In the past decade alone, quantum leaps in technology have enabled scientists to explore the Lilliputian universe of the cells with unprecedented precision. The developments have sparked the creation of a massive scientific juggernaut that rivals the Human Genome Project in scope and importance.

Called the Human Cell Atlas (HCA), the international research effort aims to create a comprehensive 3D reference map of how genes are expressed, or activated, in different cell types and their states in every organ system of the human body. The global consortium includes more than 1,000 scientists from 584 institutes in 55 countries. While they won’t attempt to plumb all 37 trillion cells in the human body, initial research is zeroing in on five main areas, including cancer; the brain and nervous system; the immune system; the epithelial tissues that serve as a protective layer throughout our body; and human development, starting with cell differentiation in the womb.

The work has the potential to usher in a new era of precision medicine that will transform our understanding of health and disease, leading to better detection, monitoring and treatment of the ills that plague humanity. “There’s much more diversity in the cells than we previously imagined, and there has been an explosion in technology that is shedding light on that,” says Sarah Teichmann, head of cellular genetics at the U.K.’s

The Universe of the Cell

Our cells are complicated creatures. Each one is composed of many millions of molecules, which continuously transmit messages to each other to complete the cell’s basic work, whether that particular cell’s job is to repair tissue damage, mop up debris or send messages along the brain’s neural circuitry. Coiled inside the nucleus of each cell is the double helix of DNA, two intertwined strands of chemicals dotted with more than 20,000 genes that provide the basic blueprint of life. As each gene is expressed, it produces RNA, which then produces proteins, the workhorses of the cells. Proteins also sit on the cell’s surface, like tiny periscopes scanning the immediate surroundings for food or hazards or foreign invaders. They relay that information to the proteins inside, which use that data to begin anew the process of cell turnover and regeneration that starts with messages from the genes.

But while each cell carries the same genes, every cell only uses some of these instructions, like a sonata that only uses some of the keys on the piano. The consortium’s lofty goal, in their quest to categorize the 37 trillion cells in the human body, is to understand which specific genes are activated in each cell type — or in scientific parlance, the patterns of gene expression.

They plan to decipher how genes inside healthy cells are properly expressed. Taking this information and using it as a point of reference will allow them to immediately see where gene expression deviates from normal. It illuminates when genes are being expressed at the wrong time, in the wrong cell type or in the wrong amount, says Dana Pe’er, a leading member of the consortium and chair of the computational and systems biology program at Memorial Sloan Kettering Cancer Center in New York. “We’re looking at a host of complex questions,” she says. “These range from how an ensemble of cells function together to fight pathogens or how a cell’s regulatory circuits go awry in disease.”

Eventually, this massive library of cell types — indexed by their states, their locations and their gene expressions — could help scientists make countless new discoveries. One of the more immediate applications: identify how gene signals go wrong in diseases such as cancer or hereditary disorders, which are triggered by mutant DNA. Researchers also could gain a better understanding of brain cells to help treat neurodegenerative diseases like Alzheimer’s, Parkinson’s and ALS. And the cell atlas might tease out which medicines an individual patient’s genes will respond to best. The same goes for treatments to which their body might already have resistance.

The research could also help a doctor know which medicines to avoid giving patients altogether. Drugs can often be unexpectedly toxic. That’s because treatments may target a specific protein, but we don’t realize that said protein may serve a useful function in another part of the body. “These are things we can spot quickly once we have a good reference tool,” says Aviv Regev, a computational and systems biologist at the Broad Institute of MIT and Harvard who helped spearhead the creation of the HCA and now co-chairs its organizing committee.

Scientists had long wanted to understand how the complex array of genes works its magic inside each individual cell, but the technology just wasn’t there until the past decade. By about 2012, a technique called single-cell genomics had grown in popularity and provided a new way to categorize individual cells. Scientists could pluck a single cell out of a test tube and sequence its genetic information. But that meant hundreds of thousands, sometimes millions, of cells didn’t get sequenced. To get around this, scientists blended the results of various cells to stand in for the entire cell population — a process that Regev compares to making a fruit smoothie.

The technique missed the range of variation in individual cells or, to extend the smoothie metaphor, failed to distinguish between the taste of strawberries and blueberries and kiwis. “By the end of the smoothie preparation process, it might look pink,” says Regev. “But if there were a few kiwis inside, you might not recognize that. And we knew that the cells are probably different from each other — and these differences matter because they all reflect on what the cell can be or will be doing.”

Scientists can now simultaneously sequence thousands of individual cells thanks to the development in 2015 of a microtechnology that Regev helped invent. The new technique encapsulates each cell inside tiny droplets. A process then breaks the cell apart, during which pieces of its RNA are captured inside tiny beads for analysis. This led to a host of discoveries that revealed there may be thousands — not just hundreds — of different cell types, according to Teichmann. In the immune system alone, we now know there are more than 200 cell types, and even the tiny retina that coats the surface of the eye has about 100 different types of cells.

Energized by these findings, scientists around the world began talking about the tantalizing prospect of peering deep inside each cell and mapping their constituent parts. By 2014, Regev had started “evangelizing” about creating a Human Cell Atlas and eventually got interest from Teichmann that pushed them both to make the big leap to actually doing it.

The HCA has already generated strong institutional support that includes $200 million from the National Institutes of Health and about $9 million from the Wellcome Trust, a London-based biomedical research charity. It also has landed a $15 million grant from the Chan Zuckerberg Initiative, which is underwriting the open-source data coordination platform that will store the terabytes of data generated by researchers.

The HCA, which kicked off in 2017, has already notched some intriguing discoveries. In 2018, Regev and researchers from the Broad Institute and Massachusetts General Hospital discovered that the lining of the trachea has seven cell types — one more than expected. That new type of cell is especially important in the expression of a specific gene that, when mutated, causes cystic fibrosis, and could prove crucial for understanding and eventually developing a cure for the genetic disease. The discovery also could lead to a better treatment for asthma.

In another 2018 study, Teichmann’s team, along with collaborators from the University of Cambridge and the Newcastle University, characterized the cancer cells behind the most common childhood and adult kidney cancers. Specifically, they found that childhood kidney cancer cells appear just as they did while they were still developing in the womb, indicating that the cells are trapped in an immature fetal state. “We found which cells are driving the tumor,” says Teichmann, “which is a tremendously important finding.” She believes it can lead to more precisely targeted therapies.

Recent research by Regev’s team also provided some clues as to why a new class of cancer drugs known as checkpoint inhibitors, which prompt the immune system to attack malignant cells, only work for a handful of patients. In a study that looked at how genes were activated in melanoma cells, her team found that some tumors have a subset of cells that simply don’t respond to immunotherapy, preventing immune system cells from thwarting the cancerous cells. The researchers are now looking at ways to reverse this resistance. Now that they can drill down to see what cells are doing, says Regev, “you can listen to the chatter between these different cells” to understand where the wrong signals are being sent and which ones halt tumor growth or restore the efficacy of the therapy.

There are many technological hurdles ahead for the HCA — just establishing platforms to share data between all the labs will be a challenge. But Regev is undaunted and predicts they’ll have a complete map within a decade.

More From Discover
Health
Walking vs. Running Benefits: Should You Walk or Run for Exercise?
Health
What is the Purpose of Hiccuping?
Mind
Gut Bacteria's Role in Anxiety and Depression: It’s Not Just In Your Head
The Sciences
This 2,300-Year-Old Mummy Has a Heart (and Tongue) of Gold
Mind
Can Playing Video Games Make You Smarter?
Health
Why Walking Might Be One of the Best Exercises For Health
Recommendations From Our Store
My Science ShopDiscover STEM Kits
My Science ShopDiscover 2022 Calendar
My Science ShopStrange Science
My Science ShopElements Flashcards
Shop Now
Stay Curious
Join
Our List