Amazing Shrinking Nanoparticles Could Sneak Into Tumors & Kill Them 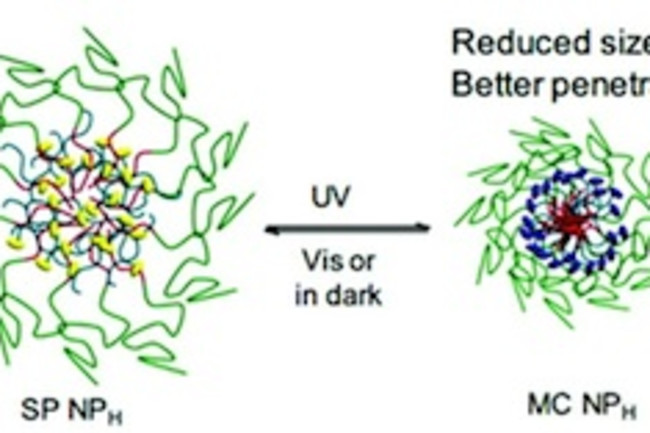 In the presence of ultraviolet light, the nanoparticle shrinks from 150 to 40 nanometers.

As anyone who has played with a powerful laser or just suffered a bad sunburn can attest, light has an impressive power to physically change objects. And now we know that light can make nanoparticles expand and contract like miniature Hoberman Spheres

. MIT and Harvard researchers engineered nanoparticles that shrink to less than a third of their original size

when exposed to ultraviolet rays; in the darkness or under visible light, they open back up to their more stable, larger size. Nanoparticles have been touted

without harming healthy cells in the process. But the structure of a tumor can block all but the smallest particles---those less than 100 nanometers (billionths of a meter)---from penetrating to the cancer’s heart. To deliver drugs to the entire tumor, the researchers suggest that the particles could be deployed while UV light keeps them in their smaller form, about 40 nanometers. Then, when the UV light is switched off, the particles will open to their full 150-nanometer size and release the drugs. 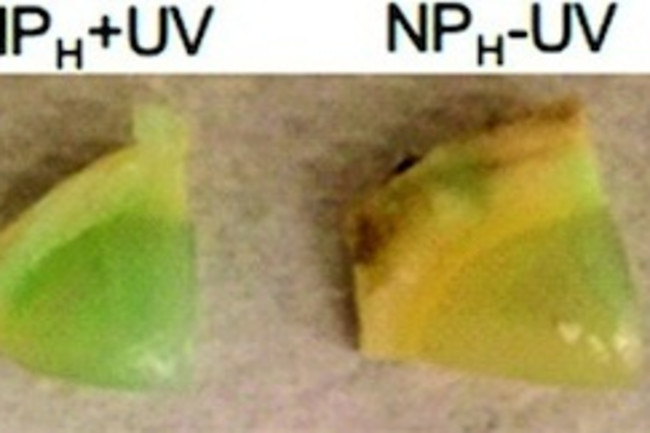 The nanoparticles, and their dye payload, fully penetrated the tissue on the left when they were deployed under UV light.

To test their capabilities, the new nanoparticles were given a blue dye payload and set loose on pig corneas, which have a dense collagen structure that makes nanoparticle penetration difficult. When the treatment also included UV light, as in the eye on the left, the dye penetrated throughout the yellow tissue and turned it green. But without the light to shrink down the nanoparticles, as in the eye on the right, the dye’s effect was much less widespread. Images courtesy of the Journal of the American Chemical Society