All taxonomy is local? 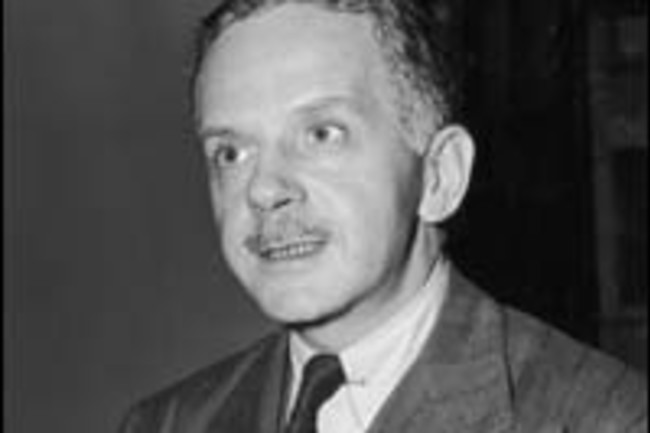 To Penner and Saperstein, the study contradicts the idea that races, and the differences between them, are dominated by biological differences between groups of people. They see race not as a fixed entity that is purely determined from birth, but a flexible one, settled by a tug-of-war between different possible classifications. Biological traits like skin colour obviously have a strong pull, but they aren't alone - changes in social position can also affect how people see themselves and are seen by others. The researchers draw a comparison with our health. Inherited genes can have a strong influence on a person's risk of eventually dying from cancer or heart disease, but changes in diet or body weight can sway those odds throughout one's life.

Data are data. Interpretation though are a different beast. By coincidence Dan MacArthur posted this figure yesterday: 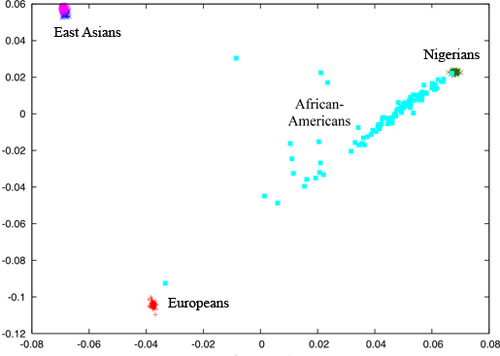 I added the bold explanatory portion. African Americans are on the order of 20% European in ancestry, but this is not equally distributed across the population. Dienekes notes:

Populations from the three major human biological races (European Americans from Caucasoids, Yoruba from Negroids, Japanese/Chinese from Mongoloids) are clearly separable, with no overlap. The "black race" to which African Americans are said to belong is seen as an almost perfect linear combination of Caucasoids and Negroids. It is not a biological race, but rather the result of admixture between the two races. The same can be seen in other admixed groups such as the Uyghur, who are a combination of Caucasoids and Mongoloids. In that case, however, the admixture is more ancient, and the opportunity to further mix with representatives of the unadmixed groups is more limited. Therefore, the blend has been completed, and most individuals have similar admixture proportions from the ancestral groups. African Americans, on the other hand are much more variable in their individual ancestry components, from ~100% Negroid, to more Caucasoid than Negroid.

Walter Francis White (July 1, 1893, Atlanta, Georgia - March 21, 1955, New York, New York) was a spokesman for blacks in the United States for almost a quarter of a century as executive secretary (1931-1955) of the National Association for the Advancement of Colored People. He graduated from Atlanta University in 1916 (now Clark Atlanta University). In 1918 he joined the small national staff of the NAACP in New York at the invitation of James Weldon Johnson. White acted as Johnson's assistant national secretary. In 1931 he succeeded him at the helm of the NAACP. ... White appeared white, a point he emphasized in his autobiography A Man Called White (p. 3): "I am a Negro. My skin is white, my eyes are blue, my hair is blond. The traits of my race are nowhere visible upon me." Five of his great-great-great-grandparents were black and the other 27 were white. All of his family was light-skinned, and his mother was also blue-eyed and blonde...Her maternal grandparents were Dilsia, a slave, and William Henry Harrison, the future President. Her mother Marie Harrison was one of Dilsia's daughters and her father Augustus Ware was also white....

But I can illustrate the point more clearly by contrasting myself and Mo of Neurophilosophy. Because Mo's family is from Egypt, of Coptic background, some have classified him as one of the ScienceBloggers of color. I've meet Mo, nice guy. But, I have to say that if Mo changed his name, say to "Marcello," he'd magically turn white in the perception of those who perceive him as non-white. On the other hand, if my name was "Marcello," most of those who perceive me as non-white might assume that I was an Indian kid adopted by an Italian family. So the social "flexibility" of racial identity is highly contingent.