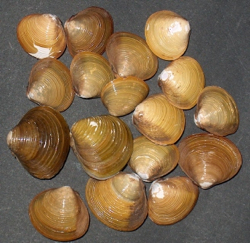 These biologists are holding out on me. I've been writing about biology for quite some time now, and sometimes I think I've got a pretty good sense of the scope of life. Neurosurgeon wasps--got it. Eels with alien jaws--check. And then I stumble across something new, or should I say, new to me. This week's revelation is androgenesis. Androgenesis is what happens when kids get all their genes from their father. Normally humans and other animals produce offspring by combining DNA from both mother and father, an arrangement that's often the case in plants as well. Both sperm and eggs only get one of the two copies of each chromosome in the genome. When male and female gametes combine, they have enough DNA together to make a new organism. There are exceptions. Hermaphrodites can be fathers or mothers. Then there's parthenogensis, in which a female animal's eggs begin developing into embryos without any sperm carrying Dad's genetic delivery. I thought that this represented the outer edge of strange kinds of reproduction. And then I came across androgenesis. At first I couldn't even imagine how androgensis can work. How can you start growing an embryo from a sperm, I wondered? And while I could at least imagine that a man might bear a child if an embryo was implanted in his gut, I could not understand how this could happen in any animal naturally. But of course, I should know never to rely on my feeble powers of imagination to guess at the maximal weirdness nature can deploy. (I probably shouldn't have posted this on April 1, because people may think I'm joking. I'm not.) Androgenesis, it turns out, transforms fatherhood into a parasitic invasion. It begins like normal fertilization, with a sperm fusing to an egg. But then the egg's DNA gets hurled out of its nucleus, so that the sperm's genes are the only ones left in the egg. The egg begins to develop into an embryo, but only after it has lost the mother's DNA. Androgenesis is rare in the natural world, but it's not obscure. Asian clams (Corbicula) came to the United States several decades ago, possibly by Chinese immigrants for food. Today they're a major pest. And two of the species that have come to our shores use androgenesis to reproduce. These particular Asian clams are hermaphrodites. Along with eggs, they also make sperm--but these are odd sperm, with a full supply of DNA. Once their sperm has fertilized the egg of another clam, the female DNA is ejected, and the clam embryo starts to develop. The mother clam broods father's clones in her gills, where they can probably thrive on the food that gets trapped there. To be precise, the eggs of Asian clams don't lose all their DNA. Most of the DNA in animal cells is in the nucleus, but there are also dozens of little energy-generating factories in the cell called mitochondria that carry their own bits of DNA as well. Fathers evict the maternal DNA from the nucleus, but the mitochrondial DNA stays behind. This only makes sense (insofar as androgenesis makes much sense at all), because a cell without a way to generate energy would have a hard time growing into an embryo. Scientists can build evolutionary trees from DNA, using it to determine how individual animals are related to one another. But when they build the tree of invasive Asian clams, the mitochondrial and nuclear DNA reveal different genealogies. It looks as if the two invasive species have been carrying out androgenesis on each other. The ability Asian clams have to use other species to make near-clones of themselves may help resolve one of the paradoxes of androgenesis. Once androgenesis arises in a species, it should be able to spread quickly because the fathers can reproduce so much faster than more conventional clams. Taking the female side of this deal is a losing proposition, because females can't pass their DNA down to the next generation. So androgenesis ought to lead to swift extinction, like some sort of paternal plague. Even if androgenetic animals could somehow avoid this doom, they would bear another burden: mutations. Without the benefit of sex to mix up their DNA, they would accumulate harmful mutations over the generations that could threaten the survival of the entire population. The huge success of Asian clams in the US is proof that androgenesis is not a one-way ticket to oblivion. Androgenesis may survive in part because the fathers can make other species their victims, too. Another species can offer an extra supply of eggs, as well as an extra supply of DNA. Studies on the DNA of Asian clams in the US suggest that on rare occasion, some of the mother's DNA stays behind in the egg. This fresh influx of genes may rescue androgenetic clams from some of their harmful mutations. For more information on androgenesis, check out this new paper in the journal Evolution. And if any biologists are holding out on any other bizarre biology, it's time to come forward.