Pregnant women are generally advised to avoid drinking alcohol and for good reason - exposing an unborn baby to alcohol can lead to a range of physical and mental problems from hyperactivity and learning problems to stunted growth, abnormal development of the head, and mental retardation. 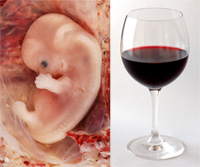 But alcohol also has much subtler effects on a foetus. Some scientists have suggested that people who get their first taste of alcohol through their mother's placenta are more likely to develop a taste for it in later life. This sleeper effect is a long-lasting one - exposure to alcohol in the womb has been linked to a higher risk ofalcohol abuse at the much later age of 21. In this way, mums could be inadvertently passing down a liking for booze to their children as a pre-birthday present.

Now, Steven Youngentob from SUNY Upstate Medical University and Jon Glendinning from Columbia University have found out why this happens. By looking at boozing rats, they have found that those first foetal sips of alcohol make the demon drink both taste and smell better.

The duo raised several pregnant rats on diets of either chow, liquids or liquids that had been spiked with alcohol. The third group eventually had a blood alcohol concentration of about 0.15%, a level that would cause a typical human to slur, stagger or become moody.

When the females eventually gave birth, month-old pups born to boozy mothers were more likely to lick an alcohol-coated feeding tube than those whose mothers were tee-total. These rats had been born with more of a taste for booze.

Partly, this was because they tolerated its bitterness rather than because they found its sweet side more alluring. Compared to the tee-total rats, those that had experienced alcohol in the womb were more likely to lick tubes coated in quinine hydrochloride, a bitter-tasting chemical, but no more likely to feed from tubes covered in sweet sucrose. This tolerance for bitter tastes was directly related to their acceptance of booze. 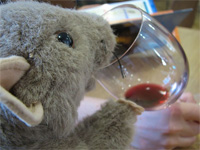 But it wasn't just that alcohol tasted better; it smelled more tempting too. Yougentoub and Glendinning placed rats in a special chamber designed to measure their body volume, and thus how strongly they were breathing. They found that rats born to binge-drinking mothers sniffed the air more intensely and frequently when the smell of alcohol was pumped in, but were no more responsive to the smell of fresh air.

The rats whose noses were most tickled by the scent of alcohol were then more likely to drink more of it when given the option later. Based on this, and previous experiments, Youngentoub and Glendinning believe that by drinking while pregnant, a mother rat can tune her child's nervous system to the scent of alcohol. It's not clear whether this happens because the babies develop a liking for the smell or because they find it less repellent, but the duo suggest that the first explanation fits better with earlier studies.

So rats that have tasted alcohol in the womb are more attracted by it in their adolescence because they find it more aromatic and more palatable. Using a bit of statistical wizardry, Youngentoub and Glendinning estimated that a more appealing taste accounts for about 29% of a young rat's increased preference for alcohol, while the more pleasing smell accounts for 22%. Clearly then, there are other factors that make alcohol more acceptable in these rats, and identifying those should be a goal for future studies.

Obviously, this study focused on rats but the same principles may well explain why humans whose mothers drink while pregnant are more likely to develop alcohol disorders in their twenties. It fits well with existing research, which show that when pregnant rats or humans drink alcohol, some of it diffuses across the placenta and into the amniotic fluid cradling her baby. Studies in both species have found that the foetus not only senses this chemical but remembers it too.

It will be interesting to see if the same applies to other drugs, like tobacco or marijuana, and how these changes play out at a genetic level (or rather, an epigenetic one).

More on epigenetics and inheritance of behaviour: