The claims of some expensive creams and lotions may be rooted in science, but the products don't necessarily deliver solutions. 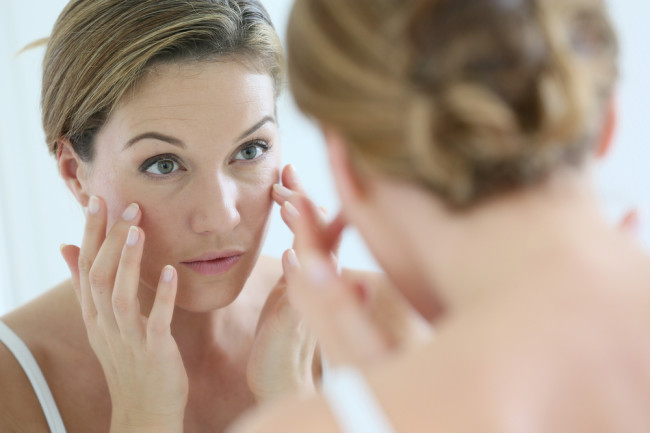 Beauty trends come and go, but a product claim that has snuck onto store shelves in recent years is a little unusual: face creams that are supposed to protect skin from pollution.

Anti-pollution products hinge on the idea that the fossil fuel and manufacturing particles lingering in the air damages skin, and that certain formulas carry ingredients that block or even reverse said harm. But do pollutants actually change our skin? And if so, do anti-pollution claims have any merit? “The first question is really easy, because there’s a lot of evidence,” says Thierry Passeron, a dermatologist at the University of Côte d'Azur in Nice, France. But whether or not these products live up to claims — and actually protect someone's skin from pollution-related damage — is more complicated.

When 'Skin Deep' Is Significant

Air pollution garners attention mostly for the harm it can cause to our bodies internally. For instance, there's considerable evidence linking lung cancer rates to air pollution. But some of the same particles we breathe in are also capable of harming our skin cells, like chemicals released by burning diesel or cigarette smoke. While researchers are still trying to understand if and how pollutants might contribute to skin cancers, a heavy focus has been on other signs of damage to the protective organ: wrinkles and dark spots.

People mostly associate these two facial features with aging and UV exposure. In fact, dermatologists refer to fine lines and dark spots due to UV light as photo-aging, as the consequences look like the results of getting older but are in fact triggered by the invisible rays of light.

Only in 2010 did dermatologists publish some of the first research suggesting that pollutants might also contribute to these skin changes, too. The first study compared groups of women of similar ages, and found that those living in more heavily-polluted towns had more wrinkles and sunspots. At first, the research was dismissed by people who assumed that only people living in the world’s most polluted cities would see the consequences of their air quality, says Jean Krutmann, a co-author of the 2010 paper and director of the IUF–Leibniz Research Institute for Environmental Medicine. “It took a while for them to understand that it’s more about low-level, chronic exposure causing the problem.”

Since then, many more studies have confirmed that a range of air pollutants accelerate wrinkle and dark spot development. Some are similar to the 2010 research and found that people living or working in more polluted areas tend to show more signs of skin aging. Other researchers have exposed skin tissue models to pollutants similar to what might be in the air and studied the effects.

Slowly, scientists have knit together ideas about how pollutants cause wrinkles and sunspots to develop. Wrinkles, for example, appear in part when the skin loses collagen — a protein that provides structure. Research suggests that pollution particles activate enzymes in skin that degrade collagen. The same soot or smoke hanging out in the air could also give rise to free radicals in the skin, or highly-reactive molecules that cause damage by stealing electrons off DNA, proteins, cell membranes and the like. Cells that produce melanin, the molecule responsible for darker pigment in the skin, become more active in response to free radicals, Krutmann says, according to research set to publish in 2021.

Scientists are also looking into a particular receptor in cells that helps the body respond to a range of inputs from the immune system, microbiome and more. Pollutants seem to be one of the many molecules that latch onto this receptor, which in turn can push cells to pump out more melanin.

There’s still a lot left to investigate about the potential interaction between pollutants and skin. For example, research indicates that combined UV exposure and air pollution can exacerbate one another and cause more damage than either might accomplish alone, Passeron says, but some hazardous particles in the air can also intercept harmful rays. How genetics, diet, smoking and other factors might change skin outcomes in a polluted environment is still unclear, too.

For those looking to ward off as much skin damage as they can, there are a few things to keep in mind. For starters, wear sunblock. “The best anti-aging prevention care is sunscreen,” Passeron says. While the ingredients in these products can’t interfere with soot particles, there is decades-worth of research showing how UV rays exacerbate wrinkles and dark spots, as well as trigger skin cancer. Look for options that protect against UVA and UVB rays.

When it comes to coping with pollution, washing your face at the end of the day, Passeron says, helps remove any residual particles that could be sitting on your skin. Also consider boosting your skin barrier — the outer layer that serves as a natural defense against UV light, inflammation and free radicals. Called the skin barrier, this outer layer of the skin is full of fats like ceramides. Face lotions help replenish these fats and other natural compounds that keep the skin barrier healthy.

In theory, applying antioxidants — particles that fight free radicals — to the skin can combat changes pollution might cause, too. Many supposed pollution-fighting skincare products claim to be full of antioxidants, such as Vitamins C or A. However, not all formulas are created equal. For starters, an antioxidant in a liquid or cream must be engineered to penetrate deep enough to access sites of damage. Additionally, the formulas need to be shelf-stable, so ingredients don't degrade too quickly. Not all brands are transparent about the efficacy of the claims on their anti-pollution packaging.

“It’s difficult for a consumer to pick good ones,” Passeron says. If someone wants to make sure their chosen antioxidant product will work, look for brands and formulas that conduct clinical research and publish the findings in academic journals.

HealthBeyond the Laughs, 'The Office' Delivers Some Hard Science. But How Does It Hold Up?
Recommendations From Our Store