Yeah, you read that right. Overweight and obesity in urban Africa: A problem of the rich or the poor?:

Descriptive results showed that the prevalence of urban overweight/obesity increased by nearly 35% during the period covered. The increase was higher among the poorest (+50%) than among the richest (+7%). Importantly, there was an increase of 45-50% among the non-educated and primary-educated women, compared to a drop of 10% among women with secondary education or higher. In the multivariate analysis, the odds ratio of the variable time lapse was 1.05 (p<0.01), indicating that the prevalence of overweight/obesity increased by about 5% per year on average in the countries in the study. While the rate of change in urban overweight/obesity did not significantly differ between the poor and the rich, it was substantially higher among the non-educated women than among their educated counterparts.

Here's a chart showing the urban/rural difference by nation: 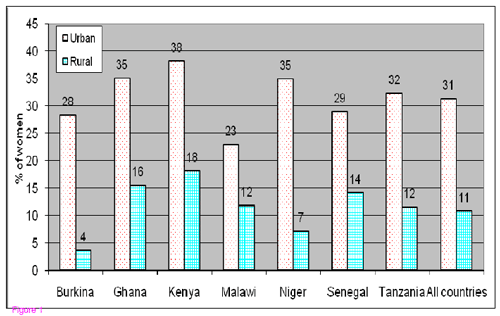 This is a problem in a specific sense; obesity tends to increase morbidity. But it also points to a bigger general positive development, the nutritional plentitude of the modern era.Citation: BMC Public Health 2009, 9:465doi:10.1186/1471-2458-9-465