The neglected tropical diseases (NTDs) are the most common conditions affecting the poorest 500 million people living in sub-Saharan Africa (SSA), and together produce a burden of disease that may be equivalent to up to one-half of SSA's malaria disease burden and more than double that caused by tuberculosis. Approximately 85% of the NTD disease burden results from helminth infections. Hookworm infection occurs in almost half of SSA's poorest people, including 40-50 million school-aged children and 7 million pregnant women in whom it is a leading cause of anemia. Schistosomiasis is the second most prevalent NTD after hookworm (192 million cases), accounting for 93% of the world's number of cases and possibly associated with increased horizontal transmission of HIV/AIDS. Lymphatic filariasis (46-51 million cases) and onchocerciasis (37 million cases) are also widespread in SSA, each disease representing a significant cause of disability and reduction in the region's agricultural productivity. There is a dearth of information on Africa's non-helminth NTDs. The protozoan infections, human African trypanosomiasis and visceral leishmaniasis, affect almost 100,000 people, primarily in areas of conflict in SSA where they cause high mortality, and where trachoma is the most prevalent bacterial NTD (30 million cases). However, there are little or no data on some very important protozoan infections, e.g., amebiasis and toxoplasmosis; bacterial infections, e.g., typhoid fever and non-typhoidal salmonellosis, the tick-borne bacterial zoonoses, and non-tuberculosis mycobaterial infections; and arboviral infections. Thus, the overall burden of Africa's NTDs may be severely underestimated. A full assessment is an important step for disease control priorities, particularly in Nigeria and the Democratic Republic of Congo, where the greatest number of NTDs may occur.

Sub-Saharan African has about 12% of the world's population, so keep that in mind when viewing this table from the paper: 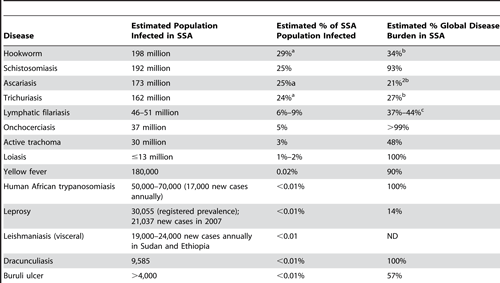 This incredible disease burden is probably one reason Sub-Saharan Africa was colonized relatively late; Europeans had a tendency of dying very quickly. It is notable that most of the "Arabs" of Sub-Saharan Africa are actually genetically indigenous, with a distant Arab patrilineage. Even then, Arab influence in East Africa was strictly coastal and did not penetrate into the interior despite nearly 2,000 years of mercantile presence. In contrast in the New World it was the natives who died due to European and African diseases. Other regions of the tropics, such as India and Southeast Asia, are subject to the same issues. But it seems likely that Africa has particular issues in regards to disease as evidenced by genetic data which suggest to many only marginal "back migration" from Eurasia. The widespread exceptions may prove the rule, the peoples of the highlands of Ethiopia seem to have had a fair amount of admixture with the peoples of southern Arabia, but these areas are also ecologically atypical for Sub-Saharan Africa due to the altitude. It may be that because of the long residence of hominids in Sub-Saharan Africa, and the presence of our closest genetic relatives who are ideal candidates for incubating pathogens which we might be vulnerable to, this region of the world is even more deadly than one might expect due to its tropical climate. Cite: Hotez PJ, Kamath A, 2009 Neglected Tropical Diseases in Sub-Saharan Africa: Review of Their Prevalence, Distribution, and Disease Burden. PLoS Negl Trop Dis 3(8): e412. doi:10.1371/journal.pntd.0000412.