Absent fathers and "bad" teens; its in the genes?

Being raised in a single-parent household, especially when a woman is head of household, puts you at higher risk for all sorts of negative personal outcomes, right? If that data is all you know, yes. But as they say, correlation does not equal causation. But the assumptions of causation come out in the responses of people to these social statistics; conservatives often want to maintain stability in the home, put the father there because the father is critical. Many liberals will focus on the economic outcomes of single motherhood, and argue that buffering the family against fiscal stress through government programs will have a palliative effect. Both of these are environmental theories. Perhaps the father has some direct impact as a role model an a source of stability. Or perhaps the presence of two parents, one of whom one is generally the father, fosters economic health. Or, perhaps it's the genes? Associations Between Father Absence and Age of First Sexual Intercourse:

Children raised without a biological father in the household have earlier average ages of first sexual intercourse than children raised in father-present households. Competing theoretical perspectives have attributed this either to effects of father absence on socialization and physical maturation or to nonrandom selection of children predisposed for early sexual intercourse into father-absent households. Genetically informative analyses of the children of sister dyads (N = 1,382, aged 14-21 years) support the selection hypothesis: This association seems attributable to confounded risks, most likely genetic in origin, which correlated both with likelihood of father absence and early sexual behavior. This holds implications for environmental theories of maturation and suggests that previous research may have inadvertently overestimated the role of family structure in reproductive maturation.

Concretely, this means that if someone is adopted into a family, that adoptee might not reflect the positive or negative context of the familial environment as much as we might think. The association between teen pregnancy occurring across generations might not have to do with mimicking as much as the fact that mothers and daughters share many personality traits which might predispose them to getting pregnant. Adolescent delinquency may simply be a reflection of parental irresponsibility, for example a father who has no contact with his children may have a heritable propensity for not being conscientious. The method involved at looking at women who had children in the National Longitudinal Survey of Youth. Some of these women were related to each other. Additionally, there was a range of patterns of father absence, from those who were present, those who were never present, to those who were partially present. The dependent variable that they focused on was "age at first intercourse." This is presumed to be an indicator value for "at risk teens." This was obviously not a study done with human subjects in an experiment. Rather, it was an exercise in data mining and model building. Because of the type of questions they asked they ran up against issues of statistical power repeatedly. They'd like a bigger N, but this was all they could get. I mention that to add some caution, as the authors litter the paper with caveats. They construed a multilevel model which took into account variables such as income, mother's age at first intercourse, race and ethnicity, though in this sample only mother's age at first intercourse seemed to be significant in predicting child's age at first intercourse. This should make us skeptical of economic or culturalist arguments. They also looked at absence and its effect across grades of biological relatedness. For example, does it matter if your cousin doesn't have a father, but you do? And does it matter if it is your first cousin or second? Or perhaps you are theoretically cousins, but your mothers are identical twins? (making you biologically siblings) A "virginity curve" that they constructed from their regression model illustrates the gist of their results: 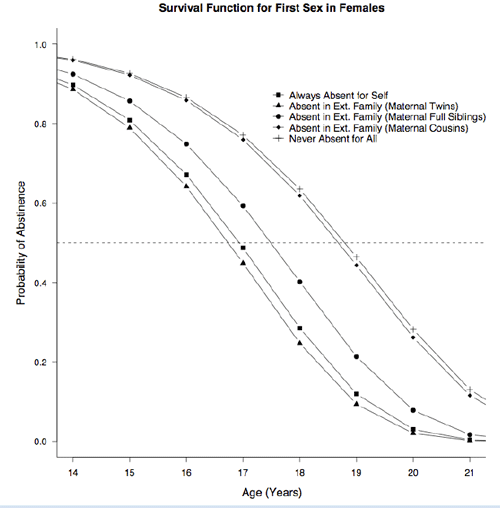 Left to right: - The first curve shows the probability of virginity at a given age assuming that one's cousin, who is possibly genetically one's half-sibling because the mothers are twins (the text says there is some ambiguity as to zygosity), has an absent father. In other words, the absence of one's cousin's father when one's cousin's mother is a twin of one's own mother seems to be very predictive. - The second curve is father absence for self. This is rather straightforward. The key point here is that it's basically the same as the first curve. This sort of finding seems to nullify models of primary paternal effect. That is, that one's own father's presence is causally related to the social problems which children without fathers have. Since the effect is the same as when one's cousin has no father when one's cousins may be a biological sibling, that suggests that direct parental involvement is not a primary issue. - The third curve shows cases where the mothers are normal siblings. This means genetic relatedness should be decreased. Again, fathers are absent for one's cousins. - The last two curves show where fathers are not absent in the whole family, or where fathers are not absent for the individual but are for 2nd cousins. That is, the mothers were cousins. The genetic coefficient of relationship between second cousins is 1/32. That of siblings and parents & children is 1/2. Between 1st cousins it is 1/8. In other words, by the point where someone is your second cousin there are very few distinctive genes in common above and beyond the general population. The authors note that these findings do not negate the possibility of more complex environmental factors which operate in a manner whereby there is a strong correlation with biological relatedness (cultural traits can be heritable, though note that in the regression model race and income were not significant predictors). They are also open the possibility to the fact that correlations in personality traits are producing a host of "anti-social" behaviors, and that father absence is simply one of the outcomes, and not a cause. The paper is likely to irritate many, so I found their conclusion interesting:

Father absence, in both the research literature and mainstream culture, is a phrase meant to evoke a certain type of underprivileged household. Despite a universal consensus that harsh, chaotic, and impoverished environments are deleterious for children, we cannot consider father absence necessarily synonymous with these correlates in terms of developmental processes. For example, children raised in high-conflict marriages actually demonstrate greater well-being post-divorce. Similarly, children with antisocial fathers fare more poorly and exhibit higher levels of externalizing when they are raised in the household with this father...Nevertheless, the (perhaps unintentional) implication of environmental theories of father absence is that the traditional two-parent family structure is optimal and that deviations from this form are inherently damaging to children.

Theories which posit that behavior are derived from genetics are in bad odor on the political Left. Theories which suggest that two-parent nuclear families are not necessary toward producing well-adjusted children may be just what the doctor ordered to neutralize any hereditarian coloring. Citation: Associations Between Father Absence and Age of First Sexual Intercourse, Child Development, DOI:10.1111/j.1467-8624.2009.01345.x