Abracadabra! Many of us are familiar with this mystical incantation. Its arcane staccato and euphonious intonation has become deeply ingrained in our language through the word’s use as a magical catchphrase. The hex was, in my childhood experience, rather useless when it came to opening locked cabinets and provoking instantaneous transformations; nothing was conjured and very little materialized except for my own disappointment. But millennia past, this word was held in reverence, and it was used for a whole other purpose altogether. Abracadabra was not a silly-sounding piece of magician’s gibberish, but the “most famous of the ancient charms or talismans employed in medicine” and a powerful invocation against a very specific and very dangerous curse: malaria. Abracadabra’s origins lay in the annals of classical history and with the work of a Roman physician, Quintus Serenus Sammonicus. Serenus was a second- and third-century scholar and enjoyed great renown due to his position as tutor to Geta and Caracalla, sons of the emperor Septimius Severus, before their own ascendance. As did many of his contemporaries, Serenus published his teachings in the form of didactic poetry. In his only surviving work, De medicina praecepta, later known as the Liber Medicinalis, he describes a number of remedies and antidotes, but particularly notable is his explanation of the steps required to invoke a powerful cure to be used in the treatment of “semi-tertian fevers,” now recognized as malaria.

Inscribis chartae, quod dicitur Abracadabra:Saepiuset subter repetas, sed detrahe summae, Et magis atque magis desint elementa figuris:Singula quae semper rapies et coetera figes, Donec in angustam redigatur litera conum. His lino nexis collum redimire memento (1). Write the word ‘Abracadabra’ on a piece of paper and repeat the word underneath, but remove [some letters] from the line above. Do so again and again, taking the letters away one at a time until it is reduced to a single letter in a narrow cone shape. Then you will take this [paper] and bind it, remembering also to wrap it up in linen and tie it around the neck (2).

The talisman was to be worn around the neck for nine days, at which point it was to be flung over the shoulder into a river that ran eastward. Serenus gives no explanation for these exact temporal and geographical requirements. He does, however, kindly offer alternative treatments for those unlucky and presumably feverish folk for whom the old scibble-on-some-papyrus-and-wear-it-like-a-necklace trick failed to cure a deadly protozoan infection. Lion’s fat could be applied to the body in a pinch while those who didn’t have easy access to big cats could go for a more rustic look by “wearing [a] cat’s skin tied with yellow coral and green emeralds around the neck"(3). This may strike you as overly ornate and exacting, but for some of us, dressing in gems and the fur of a domesticated animal is just the status quo for a fancy Friday night out. Serenus was a disciple of Basilides, the founder of a Christian heretical sect of Gnostics that incorporated the teachings of the philosophers Pythagoras - yes, of right-sided-triangle fame - and Apollonius of Tyre. It is to this disciple-mentor relationship that many attribute the origin of Abracadabra. Basilides was especially fond of mystic numerology and is believed to have coined the earliest iteration of the word. As AC Wootton writes in his “Chronicles of Pharmacy” at the turn of the twentieth century,

[Basilides] is attributed the invention of the mystic word “abraxas,” which in Greek numeration represents the total 365, thus: a-1, b-2, r-100, a-1, x-60, a-1, s-200. This word is supposed to have been a numeric representation of the Persian sun-god, or if it was invented by Basilides, more likely indicated the 365 emanations of the infinite Deity (3).

As in most things archaic, there is some scholarly debate on the provenance of Abracadabra, with some tracing it to the Hebrew “Ab, ruach, dabar” (“Father, Holy Ghost, word”) or “Abrai seda brai” (“Out, bad spirit, out”) (4). Some academics refuse to attribute any special prior meaning or etymology to the word, believing it to belong to a tradition of nonsensical though foreign-sounding gibberish used in incantations. 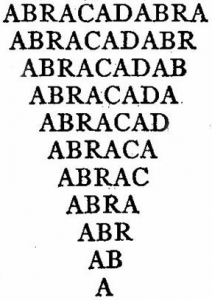 The mechanism of Serenus’ Abracadabra cure rests in the ability of talisman to protect its bearer from exposure to the “bad air” that gives malaria its modern name. For thousands of years, however, medical literature described malaria as “marsh fevers,” “intermittent fevers,” or more classically as “tertian” or “quartan” fevers, more accurately describing the cyclical febrile fits spaced out over a period of days. The famous physician Hippocrates provided a clinical description of malaria and attributed it to the presence of polluted, muggy air. Abracadabra was meant to create a shield against these malevolent airs and curious fevers from the bog. It would be two-thousand years later when scientists would definitively trace malaria infection not to the still and humid air surrounding swampy terrain, but to the to blood-sucking mosquitoes that thrive in such an environment. Abracadabra continued to be used as a talisman against a variety of terrifying ills well into the seventeenth century. Daniel Defoe, the English writer best known for his novel Robinson Crusoe, wrote despairingly of its use during the plague that ravaged London in 1665 in his Journal of the Plague Year.

But there was still another madness beyond all this, which may serve to give an idea of the distracted humour of the poor people at that time ... and this was in wearing charms, philtres, exorcisms, amulets, and I know not what preparations, to fortify the body with them against the plague; as if the plague was not the hand of God, but a kind of possession of an evil spirit, and that it was to be kept off with crossings, signs of the zodiac, papers tied up with so many knots, and certain words or figures written on them, as particularly the word Abracadabra, formed in triangle or pyramid. How the poor people found the insufficiency of those things, and how many of them were afterwards carried away in the dead-carts and thrown into the common graves of every parish with these hellish charms and trumpery hanging about their necks, remains to be spoken of as we go along.

Today we associate Abracadabra with cheap and easy magic, unknowable voodoo that makes quick fixes. But for much of human history, this word wasn't just a piece of stagecraft but a talisman, an antimalarial fetish used prophylactically much like mosquito repellent is used today. Abracadabra is ancient medicine, the people's preventative passed on for centuries to ward off unknowable and invisible disease. Even as this incantation has fallen out of favor with the Age of Enlightenment and the birth of modern medicine, Abracadabra today still maintains its essential property: the enduring wish to materialize something good out of the air. Resources Care to learn more about medical cures of old? Behold: Pyromania! On Neurosyphilis and Fighting Fire with FireReferences 1) QS Sammonicus. Liber Medicinalis. C. 210. Chapter 51, verse 944. 2) Latin translation graciously provided by Mr. Nicholas Brody 3) A Wootton (1910) Chronicles of Pharmacy, Volume 1. London: Macmillan and Co. 4) D Skemer (2006) Binding words: Textual amulets in the Middle Ages. University Park, Pennsylvania: The Pennsylvania State University Press