A Tale of Two Pox

Smallpox has haunted man for almost as long as we have been walking this earth. The variola virus that causes the deadly pox had been known to liquidate entire communities, towns, and cities since antiquity, stalking along trade routes and capitalizing upon human behavior and patterns of movement. Egyptian mummies unearthed from their tombs bear the pocked faces of fortunate survivors; Chinese emperors, Indian peasants, Russian Tzars, and Australian Aborigines - around the world, millions succumbed to virus in the centuries before the discovery of an effective vaccine. The eradication of smallpox in the late 1970s was one of man’s greatest achievements, the effective excision of a scourge that had haunted us throughout our history, and so it is interesting that there is an “Old World cousin” of smallpox, a mild-mannered viral relative that persists in the forests of central and western Africa, circulating among primates and rodents, producing an illness in humans striking in its similarity to its more infamous relative (1). Its signs are the same: red, pustular rash stippling along the arms, legs and torso, an unshakable fever with fatigue and bloodshot eyes. So deep are the similarities between these two viruses that since the eradication of variola virus, any human outbreak of monkeypox sparks fears of an act of bioterrorism, of the release, either accidental or intentional, of smallpox. The crucial differences lie in the severity of these two diseases, their mortality rates, and their etiology. 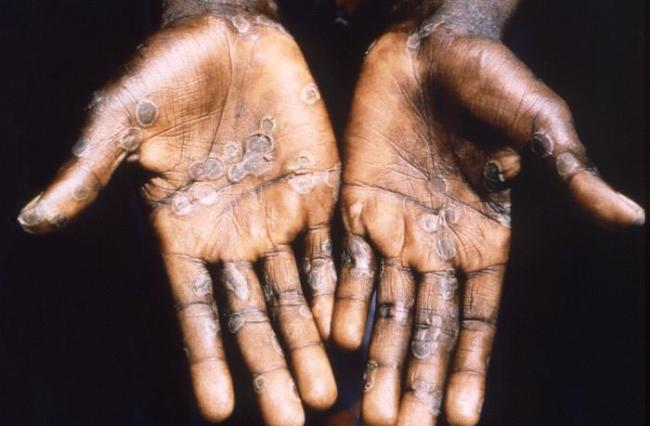 A photo of the palms of a patient infected with monkeypox during an outbreak in the Democratic Republic of the Congo (DRC) from 1996 to 1997. The rash is identical to that of smallpox. Image: Brian W.J. Mahy, CDC. The monkeypox virus was first identified in 1959 among a group of captive crab-eating macaque monkeys in Copenhagen, Denmark that had been imported for use in polio vaccine research and that had fallen ill with a pustular rash (2). Years later, in 1970, a young child in the Democratic Republic of Congo developed the classic symptoms of smallpox and, yet, that region had been classified as free from the virus, with the cycle of viral transmission fully “interrupted” by widespread implementation of the smallpox vaccine. Upon identification of the true culprit, monkeypox, it soon became clear to the medical community that this virus was a promiscuous thing, a zoonotic microbe that readily makes the leap from infecting animals to infecting humans. Monkeypox most commonly infects humans who are exposed to the virus through hunting and food handling in regions of Africa where there is a vital reliance on game animals like rodents and primates supplement the local diet. The virus causes sporadic outbreaks among communities that border heavily forested regions of equatorial Africa and case fatality rates during outbreaks range from 0% to 30% depending upon the strain (3). From 2005 to 2007, more than 700 cases of monkeypox were identified following rigorous surveillance in the Democratic Republic of Congo; that country bears the greatest burden of monkeypox and had one long-lasting outbreak that stretched over a year in the 1990s (3). In some endemic regions, antibodies to the virus can be found in nearly 40% of people living near forests (4). Monkeypox is usually geographically confined to these very specific regions due to the limited range of its natural hosts. One of the largest outbreaks of this virus, however, took place not in the forests of Africa, but throughout the midwestern United States. And the outbreak is further notable for its origins in an unusual host: the plump, bucktoothed grassland dwellers known as prairie dogs. It began in May of 2003, when a three year old girl was hospitalized in Wisconsin with a fever and an infected bite wound to the hand. Ordinarily, this wouldn’t be much cause for concern, but her case was significant on account of one feature: the bite had been sustained from a recently purchased pet prairie dog. Within two weeks, additional cases scattered throughout the Midwest were reported, instances of people falling mysteriously ill with a fever and a rash. All shared a similar trait: a history of exposure to exotic pet animals, to prairies dogs specifically, whether through ownership or by means of their trade. Electron microscopy of debris scraped from a patient’s skin lesion revealed an unexpected culprit: a pox virus (5). And soon, amidst the unfolding investigation by various local and state public health departments and the Centers for Disease Control and Prevention (CDC), a larger story of international rodent mingling emerged. 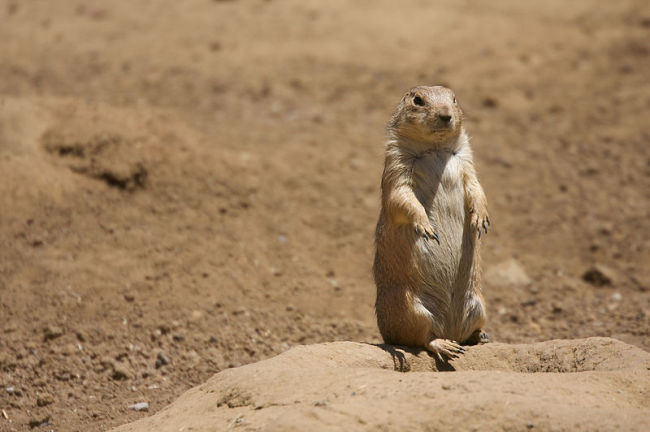 A black-tailed prairie dog. Image: chadh. Click for source. The epidemiological investigation would reveal that the midwest outbreak started in Ghana in April of 2003, where a shipment of 800 small mammals was exported to Texas to be sold in American stores as exotic pets. This shipment consisted of nine species of animals representing six different genera of African rodents including rope squirrels, tree squirrels, African giant pouched rats, brush-tailed porcupines, dormice, and striped mice (6). A separate, smaller shipment was then sent to an Illinois pet distributor, where many of these African animals found themselves in close quarters with 200 of their distant American relatives, the prairie dogs (7). Over a hundred of those prairie dogs were sold to customers throughout the Midwest, with fifteen of the animals falling critically ill and dying soon after their acquisition. Their infection, which we now understand to be monkeypox, was quickly spread to their new owners. Ultimately, the outbreak blossomed to include six states - Illinois, Indiana, Kansas, Missouri, Ohio, and Wisconsin - and around 70 people were infected, including exotic pet dealers and owners as well as veterinary professionals. Wisconsin was the most heavily affected, with a total of 39 cases. Most cases of the disease were mild, with many patients presenting with a febrile rash. Once the cause of the outbreak was identified, the smallpox vaccine was administered to thirty people for prophylactic purposes. It was one of the first occasions for its use since the eradication of the smallpox virus thirty years prior (8).

In an effort to control the outbreak, the CDC and FDA issued a unique joint order: the CDC banned the importation of all African rodents and the FDA dealth the sucker punch by prohibiting "the sale, distribution, transport, or release into the environment of prairie dogs and six specific genera of African rodents within the United States."

The monkeypox outbreak came fast on the heels of another frightening outbreak in 2003: the global pandemic of severe acute respiratory syndrome (SARS) that spread from China to southeast Asia and to North America. Both outbreaks have their origins in the trafficking of wild animal species, illustrating just how quickly new diseases can emerge in unexpected environments threatening our public health in novel and unexpected ways. Previously on Body HorrorsThe Eradication of Smallpox is a Blueprint for Polio’s Demise