A Season of Hemorrhagic Fevers

Uganda and the Democratic Republic of Congo have been bedeviled by viral hemorrhagic fever outbreaks this year. Since the summer, Ebola and Marburg have appeared throughout the two verdant countries killing dozens of people.

An Ebola outbreak in western Uganda began in early July, another Ebola outbreak materialized in eastern DR Congo in August, and then Marburg made an appearance in south-western Uganda as well as in the capital Kampala in October. Last month, Uganda finally declared the country free of hemorrhagic fevers after three months of battling these seemingly omnipresent sanguinary viruses. And then Ebola appeared yet again in Luweero, a village located just 47 miles from the capital. It has been an incredibly psychologically and financially taxing period for the two countries.

(Confused on the timeline of events? I certainly was! But the WHO is here to help with a chronology of Ebola outbreaks here and Marburg outbreaks here.) 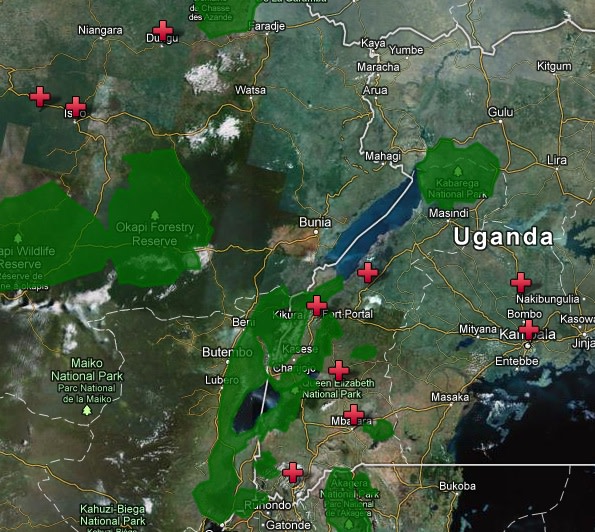 Ebola and Marburg hemorrhagic fevers outbreaks in Uganda and the Democratic Republic of Congo in 2012. Red crosses represent reported cases and the green amorphous shapes represent parks, forests and reserves as identified by Google Maps. Click to visit the map, zoom in and get additional info. © Google.

The thing to remember with viral hemorrhagic fevers is that they're not toxic miasmas, diffusing through households and indiscriminately infecting innocents. They're viruses. They spread through contact with infected bodily fluids, resulting in the transmission of viral particles and like any other infectious disease, there’s a method to the madness. True, they're frightful illnesses and quite deadly, but there are clear epidemiological patterns and even cultural contexts to their arrival and spread in communities.

Take these viral hemorrhagic fever outbreaks, for example. Uganda and the DR Congo are incredibly rich and diverse in their ecology - the Congo Basin is one of the largest and densely forested regions in the world - and much of their economy depends upon safari tourism and gorilla trekking (1). The livelihood of their peoples is also greatly reliant on poaching and bushmeat; for many in the DR Congo, primates, ungulates, primates and rodents are often their only form of animal protein considering the prohibitive cost of raising or purchasing domesticated animals for food (1). It can be easier and kinder on limited finances just to go into the forests to get your dinner. Coincident with the diverse wildlife and the lush wilderness that flourishes in these countries are also viruses simmering away, undisturbed for the most part.

The recent outbreaks in Uganda and the DR Congo have some local officials pinpointing the origin of the these most recent outbreaks on infected bushmeat and contaminated fruit. The Ebola outbreak in August in the Dungu district in northern DR Congo began with a hunter who found and consumed the remains of an antelope, quickly fell ill and died (2). October's Marburg outbreak in Kabale, Uganda is speculated to have occurred when villagers ventured into the wild to collect fruits that were contaminated by fruitbats, a known reservoir of the virus (3).

An isolation camp for infected patients and suspected cases during Uganda's Ebola hemorrhagic fever outbreak this year. Image: The Lancet. Click for source.

There's an unexpected upside to these grim epidemics as public fears of these deadly viral hemorrhagic fevers are keeping wildlife poachers and bushmeat hunters from venturing into the forests for profit and food. Park rangers in the DR Congo report that there has been demand for bushmeat has crashed with a concomitant rise in fear of contracting a fatal disease. Media Congo, an online newspaper covering the Congo, notes, "the fight against poaching of rare species that was once the sole preserve of NGOs and officials of the Congolese Institute for the Conservation of Nature (ICCN) has become the business of everyone" (4). Giant primates have been threatened for years by poachers and bushmeat hunters and though our closest ancestors are also at great risk of contracting and dying of Ebola and Marburg, for now they're safe from those hunting them (5).

To figure out just where the outbreaks were occurring, I began playing around with a few maps to pinpoint the locations of reported villages in relation to nearby protected park, forests and game reserves. There's limited information on the outbreaks - even from the WHO and Medecins Sans Frontiéres/Doctors Without Borders - on the exact origins of the many victims who have traveled to hospitals seeking care and then have died and these maps are the best I could do with the limited information available. The maps give a good idea of how geographically disparate the epidemics were, the proximity of the legion parks and reserves to reported outbreaks and how the two countries are just entirely covered in lush, green forest.

Ebola may be transmitted by respiratory means; the possibility of airborne transmission of this virus would go far in explaining how transmissible the virus is within households and hospitals.

"Protein from forest wildlife is crucial to rural food security and livelihoods across the tropics." A great read on bushmeat in the two most densely forested and least populated places in the world.

The WHO's Global Alert & Response monitors all global epidemics and public health emergencies. This is the current list of 2012 epidemics.

The gorilla population was devastated in 2002 and 2003 as outbreaks of the Zaire strain of Ebola killed nearly 5000 gorillas in northwestern DR Congo.