A Pox No More

It is one of my earliest childhood memories: I am three years old and standing by a bathtub, furiously scratching the itchy lesions just recently slimed with fluorescent pink calamine lotion in a vain attempt to alleviate the misery of chickenpox. Thanks to a wildly successful vaccine that has now vanquished what was once a ubiquitous viral infection, my memories of chickenpox are a woeful experience that few children today will ever experience. Varicella infection, popularly known as chickenpox, is one of the more well-known viral rashes of childhood. The incredibly contagious virus - it is estimated that one ill person can infect up to 12 to 18 people over the course of their disease - is spread by respiratory droplets sprayed by coughs and sneezes as well as by direct contact with the rashy lesions that shed the virus (1). Infection causes a typically mild skin infection of week-long duration that is characterized by a hallmark itchy papular rash, a fever, and a small dose of hardship. Anywhere from 200 to 500 lesions may form, progressing from flat itchy pox to fluid-filled vesicles that rupture and crust (2). 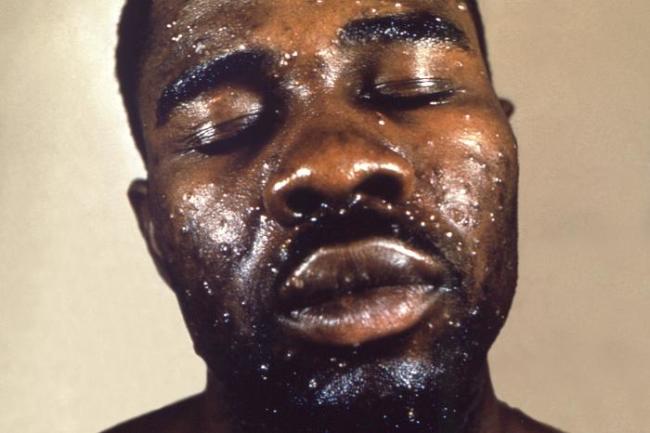 A man infected with the chickenpox virus. Image: CDC / Renelle Woodall. Chickenpox is a remarkably successful and contagious pathogen, once almost inescapable. In the 1990s, an estimated 4 million cases of chickenpox occurred in the United States every year (3). Almost every living American invariably became infected with varicella at some point in their lifetime. In fact, catching a case of the chickenpox was once considered a veritable rite of childhood, one that often began when parents of healthy children would schedule playdates with an afflicted friend, sparking a small-scale outbreak of the virus as a result of the so-called “pox party.”This was not done out of malice, of course; becoming immune to the virus as a child would potentially spare one a nastier bout of the virus later on as an adult, whether in the form of deadly pneumonia, catastrophic brain infection, or a systemic-wide infection like sepsis. An immunologically naive pregnant woman could also pass the infection to their fetus early on in pregnancy, resulting in birth defects. Today, the incidence and prevalence of chickenpox have dramatically declined due to a wildly effective vaccine and the implementation of a national vaccination program. Since its introduction in 1996, cases of the infection have dropped a staggering 90% (3). One dose of the vaccine is estimated as being 85% protective in preventing varicella infection and anywhere from 67 to 100% effective in preventing herpes zoster infection, a later reactivation of varicella infection (1). It has resulted in a 95 to 98% decrease in serious chickenpox infections that would warrant medical attention or hospitalization.Like many other ubiquitous infections that regularly smite the population, such as the flu or pneumonia, chickenpox was once a significant burden on the public health system (1). These include the direct medical expenses incurred from visiting doctors and hospitals, paying for alleviative treatments, or suffering from complications or even death. The costs accrued from managing outbreaks in institutionalized settings, whether within schools, hospitals, or prisons, also must be considered. And then there are the vaguer costs that can be difficult to quantify but are no less important, such as the price to society through missed days of school for children and work for caretakers. The vaccine has eliminated many of these exacting financial burdens.Chickenpox was never without its risk of serious complications, whether in children or adults. In fact, it was deaths from varicella in children that initiated research into a viable vaccine. Before the chickenpox vaccine, over 11,000 hospitalizations and a 100 to 150 deaths occurred annually. But since the introduction of the vaccine just two decades ago, chickenpox has been nearly extinguished in American society. It has been a resoundingly successful vaccine in this country, quashing a once ubiquitous pox. Resources

Read more about vaccines and their cost-benefits from the CDC here.

Should you send your kid to pox parties? No. Great article from Slate about chickenpox nostalgia and a recap of some of the statistics presented here.

Varicella is a member of the noble Herpes family of viruses. Read more about this clan in Half of the World Has Herpes