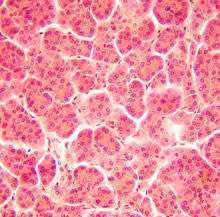 In an attempt to find a cure for type 1 diabetes, researchers are looking to an unlikely source: testicles. In a new study, researchers extracted stem cells drawn from human testes and reprogrammed them to produce insulin. When implanted into diabetic mice, the altered cells brought down the mice's blood glucose levels, temporarily curing their diabetes. In type 1 diabetes, the body's immune system mistakenly destroys the pancreatic beta and alpha cells, which regulate blood glucose levels. Without the insulin created by their beta cells, diabetics experience high glucose levels that cause serious health problems. Lead researcher G. Ian Gallicano and his colleagues took human spermatogonial stem cells--precursor cells that give rise to sperm--and reverted them to an embryonic state. Then the researchers coaxed them to develop into insulin-producing cells that resemble beta cells. Finally, they injected these pseudo-beta cells into the pancreases of mice with type 1 diabetes. In a presentation on Sunday at the American Society for Cell Biology annual meeting, Gallicano said the graft was able to produce enough insulin to "cure" the mice of their diabetes for a week, though insulin levels were not high enough to treat humans this way.

"We need to get the amount of insulin up to the point [of] being secreted from each cell that it will be enough to cure diabetes in humans," said G. Ian Gallicano, a developmental and stem cell biologist at Georgetown University Medical Center. "If you are a mouse and you have diabetes, you are in luck, we can help you."

Using a man's own spermatogonia

to make the beta cells would overcome a major problem with pancreatic transplants, since the man's body wouldn't reject the transplant as foreign. But it wouldn't undo the autoimmune destruction of the pancreatic cells that causes diabetes to begin with.

"This study is a positive step, but you still have a risk of teratomas [cancers caused by stem cells], and the autoimmunity could destroy the new insulin-producing cells," said one expert, Dr. Camillo Riccordi, scientific director of the Diabetes Research Institute in Hollywood, Fla. "And the other limitation is that this is only for men, not for women." [HealthDay News]

Also, both the beta and alpha cells of the pancreas are destroyed in the autoimmune onslaught. The alpha cells are needed to produce glucagon

, which prevents the body's glucose levels from dipping too low. To truly cure diabetes, you would need to replace both types of cells. Related Content: 80beats: Stem Cells May Eventually Replace Needles for Some Diabetics

80beats: “Metabolic Sins of the Father”: Fat Dads May Give Their Kids Diabetes

80beats: Testicles Could Yield Stem Cells Without the Ethical Complications

DISCOVER: Child's Plague: Inside the Boom in Childhood Diabetes