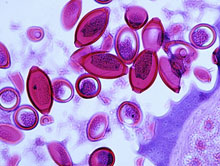 Intestinal parasites might turn most people's stomachs, but for some people suffering from ulcerative colitis, the creepy crawlies might actually reverse intestinal discomfort and symptoms. A new study found that infestation with whipworms, aka Trichuris trichiura, can ease the symptoms of an inflammatory bowel disorder, possibly by stimulating mucus production in the intestines. Ulcerative colitis is an intestinal auto-immune disease causing inflammation and ulcers, which can bleed. Patients can either take immune-suppressing steroids (with lots of side effects), or have parts of their intestines and bowel removed to reduce symptoms. One colitis patient, on a lone voyage to cure his bowel problems, went in search of worms after hearing about a researcher, Joel Weinstock, who believes that intestinal parasites like whipworms and hookworms can cure autoimmune diseases. In 2004 he was able to get his hands on a batch of human whipworm eggs from Thailand. He ingested 500 of them, and the eggs hatched inside him and set up shop in his intestines (want to see a picture? Beware: linked photo may make you revisit your lunch). Three months later, he downed 1,000 more eggs. None of this was done under doctor supervision, of course, since the only kind of whipworm approved for medical testing in the United States don't live very long in humans. After the patient has filled his bowels with worms, he contacted parasite immunologist P'ng Loke. The man allowed doctors to take a gander at his colon and track the worms and his symptoms, Loke explained to LiveScience:

"When he had colonoscopies for different reasons, we basically tried to characterize biopsies that were taken from his gut," Loke told LiveScience. "We tried to look at these biopsies and see what kinds of immune cells were activated ... what kind of genes were activated. We were trying to put together a picture of what was going on in the gut at different times."

The patient's symptoms decreased until he didn't need any other treatment, though they returned in 2008 after a massive worm die off. Luckily, he was able to procure more worms and took 2,000 more eggs to replenish his supply; his symptoms once again disappeared. Somehow the worms were helping his intestines recover from the colitis, Loke explained to Scientific American

"Ulcerative colitis is often associated with decreased mucus production and the worms seem to somehow restore mucus production.... It's possible the mucus serves as a defensive barrier between bacteria and the gut that prevents bacteria from causing inflammation and crossing over into other tissues."

Inflamed areas of the man's colon weren't producing enough mucus, but where the worms were present, the colon was awash with it. Testing of the white blood cells in the worm-infested colon regions indicated that many of these immune cells had switched from producing interlukin-17, a protein which promotes inflammation, to interlukin-22, which promotes mucus production. 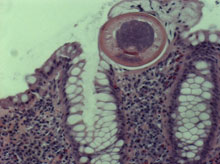 It's possible, the researchers say, that the switched-on mucus production is the body's attempt to expel the worms, as well as to repair the damage the worms cause to the intestines. Problem is, you never know what else you might get with such worms: They are known to transmit hepatitis, and are harvested from poop. They also have their own detrimental effects, since they are, after all, parasites. Until medical strains of the worm are tested for safety and efficacy, you are SOL (literally), Weinstock explains to LiveScience

"There's no safe way of getting exposed to it at this point," Weinstock said. "All of these things should be done with the aid of a doctor and carefully thought through, not by indiscriminately seeking exposure."