Are Hookworms the Next Claritin? 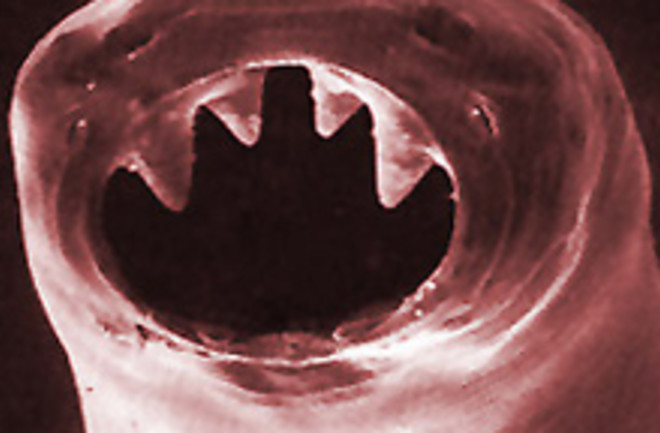 Jasper Lawrence isn't the typical salesman: He sells parasites for $2,999. People can purchase worms through his company, Autoimmune Therapies, where customers have the choice of swallowing "a dose of whipworm, or [applying] a Band-Aide of hookworms to penetrate the skin." Here’s how his wormy idea developed: Lawrence had been suffering from asthma and allergies, and after years of taking prednisone he decided to try hookworms instead. He got the idea from a documentary about a researcher who became infected with hookworm during a study of why people with the parasite never seemed to suffer from asthma and allergies. Lawrence subsequently traveled to Africa and walked around barefoot until his feet were infected. ABC reports:

Within a few months, Lawrence said his asthma and allergy symptoms dissipated. He stopped prednisone. He started to exercise without worrying about an attack and, as a result, he said he lost 40 pounds. Seeing an untapped treatment, Lawrence decided to go into business selling parasitic worms to people hoping to temper autoimmune conditions such as asthma, allergies, Crohn's disease, colitis and inflammatory bowel disease. He even has competition. At least one other online business offers patients worm therapy—all without monitoring by the Food and Drug Administration.

Perhaps the supply of clean food and water available in industrial countries has upset the balance that humans had established with parasites for millions of years. And now, without parasites around, scientists have suggested that our immune system can no longer fully develop, which might explain why we’ve become such an allergy-ridden nation. Still, this doesn’t mean you should rush online to buy worms just yet. If you find yourself tempted to swallow a parasite, you should probably wait to see what the results of the FDA clinical trials of worm therapy are first. Related Content: Discoblog: Can Cigarettes *Decrease* the Effect of Respiratory Allergies? DISCOVER: Jared Diamond on The Arrow of Disease The Loom: Build Me A Tapeworm