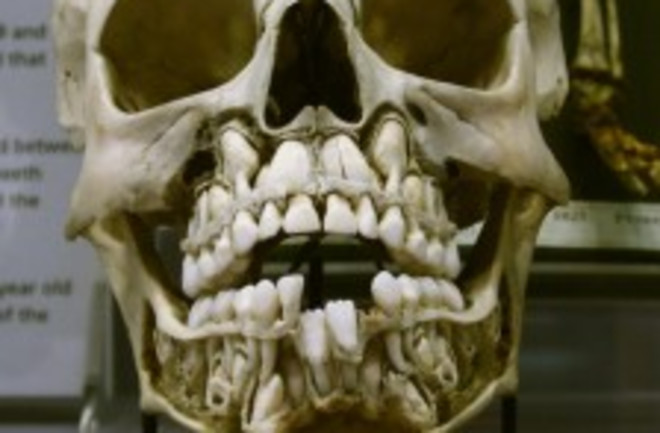 Child's skull with baby teeth and adult teeth, Hunterian Museum, London. Photo: Stefan SchäferMaybe it's because of the various traumatic ways I lost my baby teeth, but whatever the reason, teeth feature prominently in my nightmares. And now I have yet another vision to add to the bag of horror: "intranasal teeth" (literally, teeth inside the nose). Apparently (and horrifyingly), it's not unheard of to have teeth stuck inside one's nose. There are a number of ways this can come about, but typically it happens to children. And no wonder--the image to the left shows what the front of a child's face looks like when the adult teeth are about to grow in; from nose to chin, it's pretty much ALL teeth. Not surprisingly, some of these teeth can get a bit lost and grow into the nasal cavity. Other children fall, lose a tooth, and get it stuck in their nose. Like this one:An unusual foreign body in the nostril. "BACKGROUND: Intranasal teeth are uncommon. Causes include trauma, infection, anatomical malformations and genetic factors. They present mainly in children, and many are asymptomatic. METHODS: This report describes the finding of a tooth that had been displaced into the nasal cavity in a six-year-old girl. The history, clinical examination, findings and operative treatment are described. RESULTS: The child presented with nasal symptoms. Examination revealed a tooth in the right nasal cavity, confirmed by a lateral cephalogram radiograph. It was extracted under general anaesthesia. At follow up, the child was asymptomatic. CONCLUSION: This is an unusual case of a child presenting with an intranasal tooth and nasal symptoms following trauma a number of years earlier. The child underwent extraction of the tooth, and recovered well without any complications." Bonus quote from the full text: "A fit and healthy six-year-old girl was presented to our accident and emergency department due to a two-month history of unilateral, right-sided nasal congestion and laboured breathing at night. Her parents reported a tendency for her to repeatedly blow her nose. She did not have any other symptoms. Her medical history showed that, at two years of age, she had fallen from a high chair and had caught her mouth on a window ledge, resulting in trauma to her upper right deciduous central incisor. Her parents noticed the tooth to be missing following the trauma, but did not follow this up with any specific medical or dental investigations. On examination, a hard, white mass was noted in the child's right nasal cavity. The nature of the foreign body was unclear, and an attempt was made to remove it. This resulted in bleeding; thus, further attempts to remove the foreign body were abandoned. A lateral cephalogram radiograph was requested, which revealed an opaque, calcified structure in the nostril (Figure 1). The child was directly referred to the ENT department for further investigation. There, it was concluded that the object in her right nostril was most likely to be of dental origin, i.e. a tooth. Extraction of the intranasal tooth was performed under direct vision by the oral surgeon, with an approximate operating time of 10 minutes. Post-extraction, the nasal mucosa appeared intact, with no obvious oro-nasal communication."