One minute, Albert was feeling fine. The next he was overcome by cramps and nausea. Then came the blood. 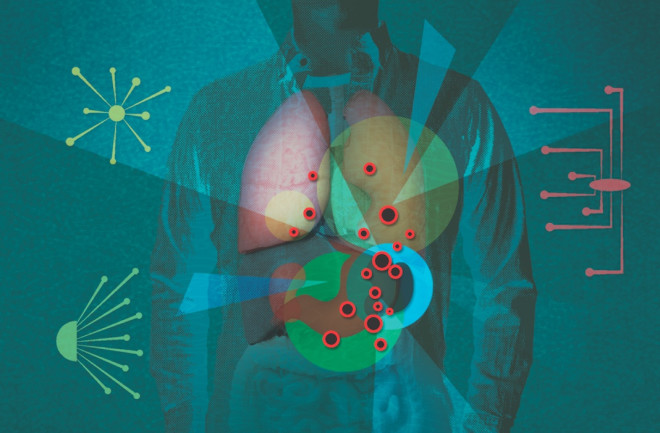 I was called to see Albert, a 35-year-old man, while he was an inpatient at our hospital. Albert had experienced a bout of hematemesis (vomiting blood) and had been admitted to determine the cause. Although dramatic in nature, hematemesis is a common complaint that we gastroenterologists are trained to evaluate and treat. Most patients have garden-variety problems, such as stomach ulcers or esophagitis (inflammation in the esophagus from acid reflux), that can lead to hematemesis; these troubles are generally easily managed. But not this time.

Albert told me that he had been feeling poorly for several months, with symptoms that seemed to come and go. He often experienced severe left-sided back pain that would come on out of the blue, leave him in agony for a few days, and then suddenly disappear. Sometimes, he would get abdominal pains that would leave him doubled over, only to have them vanish for weeks at a time. This time, he had been at home, feeling fine, when suddenly he was overcome by abdominal cramps and nausea. He ran to the bathroom and retched severely, eventually bringing up the blood. Naturally, the episode terrified him. He called 911 and here he was.

At the time of our first visit, Albert seemed fine. He had been in the hospital for just under a day and was feeling like his old self. He wasn’t taking any of the medications known to promote the formation of stomach ulcers — over-the-counter anti-inflammatories such as aspirin or ibuprofen are among the most common — and he denied ever having reflux symptoms. His physical exam and blood tests were essentially normal. I suggested that we schedule an upper endoscopic exam for the next day, which would involve inserting a flexible camera into his mouth to evaluate his esophagus, stomach and the beginning of his small bowel, in order to look for a source of blood loss.

Off to the ICU

Upon arriving at the endoscopy lab the next day, I couldn’t help but notice that Albert’s name had been removed from the schedule of patients. I asked our receptionist what had happened and was told that Albert had been moved to the intensive care unit; he was too unstable to undergo his endoscopic procedure. Assuming that he had vomited blood again — recurrent episodes of hematemesis are also common — I went to the ICU to see him, only to be told some startling news by the physician in charge: Albert had experienced severe hemoptysis (coughing up blood from his lungs), which had prompted his transfer to intensive care. He was currently on a ventilator as he was struggling to get enough oxygen on his own.

This was a striking development; hematemesis and hemoptysis are very different clinical entities, and usually the diseases that lead to one do not lead to the other. Could Albert have two separate disease processes occurring simultaneously?

It was possible, but seemed unlikely. I still wanted to get a look at Albert’s esophagus, stomach and small bowel. The ICU doctors also wanted to get a good look at his lungs via a different type of endoscopy, known as a bronchoscopy. We agreed that we would both perform our respective examinations the following day, in the ICU, where he could be monitored closely. I also suggested we get a CT scan of Albert’s chest, abdomen and pelvis.

That evening, I got a call from the radiologist on call regarding the CT scan results — never a good sign. Albert appeared to have a mass in his left kidney as well as similar smaller lesions in his lungs and in the lining of his stomach. The radiologist told me that this appeared to be kidney cancer that had already spread to many other sites in the body.

This was obviously very disturbing and ominous news. Still, it seemed to explain Albert’s symptoms and provide a unifying diagnosis; cancerous lesions in the stomach and lungs can and do bleed. I logged on to my computer from home to look at the CT scan myself, and it certainly looked to me just as the radiologist had described. But … I also noticed that the radiologist also reported that Albert had undergone prior surgical removal of his spleen, a fact that Albert had not mentioned to me when I asked him about his prior medical history.

By the time I arrived in the ICU the next day, Albert had been removed from the ventilator and was breathing on his own. He had already been told the results of his CT scan and was understandably dejected. As we were setting up to do his endoscopy and bronchoscopy, I asked him what had happened to his spleen. “Oh, yeah,” he said, clearly recalling something he had not thought of in some time, “I was in a car accident in high school and my spleen ruptured and had to be removed. I forgot all about it.”

After Albert was sedated, I inserted the endoscope through his mouth. His esophagus was normal. I did see several raised red lesions in the lining of his stomach. I have performed many thousands of endoscopic procedures and seen more than my share of cancer. But these lesions did not look like cancer at all! I was cautiously optimistic. Still, the lesions were abnormal, so I dutifully biopsied several of the worrisome spots. The rest of his exam was normal. When the pulmonologists looked in Albert’s lungs with their bronchoscope, they saw similar spots. I suggested that they biopsy them as well, and began to wonder about Albert’s missing spleen. Perhaps we were wrong about his diagnosis.

The next day, the pathologist assigned to the case phoned me regarding Albert’s biopsies. He wanted to be sure we had biopsied the right areas. What he saw under his microscope didn’t look like stomach or lung; they appeared to be biopsies from the spleen. Now we were getting somewhere.

Albert didn’t have cancer, I concluded: He had splenosis. This is a rare condition where tissue from a patient’s own spleen migrates to other parts of their body. Trauma to the spleen — in the case of a car accident, for example — can result in splenic tissue being released into the abdomen and/or the bloodstream. From there, the tissue can take up residence almost anywhere in the body. How tissue from the spleen is able to transplant itself is not well understood. Splenic lesions can be solitary or multiple, and we were not the first doctors to think a patient with splenosis had cancer. Sometimes the lesions in splenosis are totally asymptomatic, but they can cause bleeding or pain, compress other organs, and even lead to seizures if they find a foothold in the brain.

The treatment for splenosis is to remove or ablate symptomatic lesions. The pulmonologist and I repeated our respective procedures and, using devices capable of cauterizing tissue, burned off as much of the errant splenic tissue as possible. We also removed the mass in Albert’s kidney; it too was splenic tissue.

All of this was a consequence of a car accident that had happened almost two decades ago. The splenic tissue had been alive in Albert all this time. Why the lung and stomach lesions decided to bleed at nearly the same time remains a mystery. Albert still has splenic implants in his body that can be treated if need be in the future, but he was overjoyed with his final diagnosis. It was certainly better than metastatic cancer.

Douglas G. Adler is a professor of medicine at the University of Utah School of Medicine in Salt Lake City. The cases described in Vital Signs are real, but names and certain details have been changed.