Poor circulation can come from a lot of things — some more deadly than others. 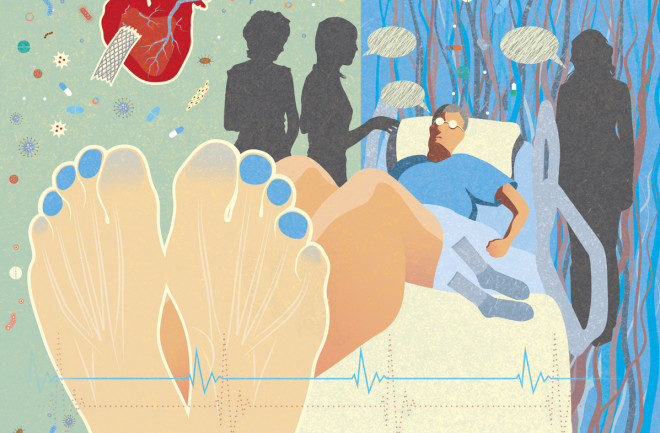 The stylishly dressed woman squared her shoulders to hold my gaze. Three others — two sisters plus mom, I guessed — completed the entourage. A 70-year-old man lying on the stretcher had the wan but well-cared-for look of a convalescent used to letting his daughters do the talking.

“He had a heart attack a month ago,” the lead daughter continued. “Two stents. Doing OK until a week ago. The feet started aching. The tips of his toes turned blue. We turned up the heat and put on thick socks, but it’s only gotten worse.”

I turned my attention to her father. “Hello, Mr. Mendez. May I take off your socks?” I asked.

I slipped them off to find bony feet, parchment-yellow skin, tendons taut as cords, no angry-red cellulitis, but yes, there they were: blue toes. The fleshy tips of the middle three on each foot sported a daub of robin-egg blue. A cavalcade of exotic, dangerous diseases trotted through my head.

“Do they hurt?” I asked. The man didn’t answer, so I asked again, in Spanish: “Le duelen?”

I ran two fingers over them. They were soft — no obvious abscess or clot.

“Los puede menear?” Can you wiggle them?

The toes rose and fell like little piano keys.

The rest of his physical exam was normal: no joint swelling, no other skin discoloration or palpable lesions, no heart murmurs. His vital signs were normal, though his pulse hovered around 60, a little low.

Bad blood could include “sludging” diseases — like leukemia or other cancers that produce too many red cells, white cells or platelets — and autoimmune conditions that cause runaway clotting.

Bad vessels could arise from vasculitis, an inflammation of arterial walls that can be caused by an autoimmune attack, such as lupus. At a mechanical level, blood vessels can get clogged by the fat-and-calcium plaque of atherosclerosis. Moreover, fragments of plaque in large arteries can break away to cork smaller vessels downstream.

Another possibility for bad vessels is Raynaud’s disease: Exposed to the cold, arteries in the hands and feet will constrict to limit blood flow and conserve core heat. Overconstriction can cause severe blanching — and often excruciating pain — followed by cyanosis, the blue-green hue of oxygen-starved tissues. Raynaud’s can happen by itself, or as one aspect of a systemic disease.

The leading candidate for infection was endocarditis, a bacterial invasion of the heart valves. I hadn’t heard a telltale heart murmur during my exam, but that ruled out nothing. Valve-encrusting bacteria, debris and immune complexes (antibodies bound to their targets in a molecular death grip) can seed the bloodstream to inflame or block distant blood vessels. Endocarditis is a bear to treat, requiring four to six weeks of intravenous antibiotics.

“What could be the cause, doctor?” a second daughter asked.

“It could be many things,” I answered. “From a blood disorder, to infection, to the immune system attacking the body’s own blood vessels. Is he taking anything besides the heart and blood pressure medications?”

As his daughter had pointed out, Mr. Mendez had suffered a heart attack a month ago, but had recovered nicely and was on a standard post-attack and stent regimen: Lipitor, a statin to lower cholesterol; Plavix, an anti-platelet drug; atenolol, a beta-blocker; and Lisinopril, a blood pressure reducer.

“No supplements?” I continued. “He hasn’t traveled anywhere? No fevers? No joint pains? Never smoked?” The answer, from first to last, was no.

Casting a wide net, I ordered ultrasounds of the arteries and veins of the legs, and cultures of blood and urine to pick up possible invading bacteria, inflammatory markers indicating infection, tests of kidney and liver function, serum electrolytes, blood cell counts, and a urinalysis to look for the rod-shaped debris that kidney tubules shed when infected or inflamed.

Depending on the workup results, that could lead to an echocardiogram to look at the heart valves or a CT scan with intravenous contrast to trace the arterial system.

“These special tests will take a while,” I explained to Mr. Mendez and his family.

As I turned, it struck me that Mr. Mendez looked pretty hale. I stepped back and asked him in Spanish, “At this moment it is mostly the toes that bother you, no?”

It was weird because, usually, blue is pretty bad. It’s the sickly hue of oxygenless blood. Hands and feet and babies are never supposed to be blue. How could he be so healthy otherwise, despite such a serious symptom?

A while later, the first results came in: white and red cells, platelets, all normal; coagulation profile, on target; kidney and liver function, electrolytes, all good.

Infection seemed unlikely, given the normal white count, no fever and normal vital signs. The sedimentation rate, a crude measure of overall inflammation that’s particularly sensitive to endocarditis, also checked out as normal.

That left mostly autoimmune diseases or breakaway atherosclerosis. Precise diagnosis of the former relies on specific patterns of protein markers and maybe some biopsies, the latter on angiograms and other vascular studies.

I considered admitting him despite how stable he looked. It’s hard to tell a patient and family, “Hey, those blue toes could be a harbinger of something terrible. So just go home and have your family doctor run some tests. You’ll know soon.”

Back in Mr. Mendez’s room, I said, “The good news is, all tests are normal.”

“So what’s causing this?” the first daughter demanded.

“Still hard to say,” I replied. “It might be wise to admit him to run the next battery of tests. I’d like to have a cardiologist and a rheumatologist see him.”

My patient’s face fell. The lead daughter spoke again: “You mentioned medications. What about the drugs he’s taking?”

Right. The meds. “Those are widely used drugs with long safety records,” I stammered.

“But you said many things could cause this.”

The simple fact was that in hot pursuit of the exotic, I’d missed the commonplace. Atenolol, Mr. Mendez’s beta-blocker, has been around for decades. A revolution in cardiac care when introduced in the 1960s, beta-blockers are now ubiquitous — to the tune of 70 million prescriptions each year in the U.S.

Once a heart has been damaged from a heart attack, it’s bad for it to get too worked up. Beta-blockers act to cloak the receptors in the heart (called beta-receptors) that respond to fight-or-flight hormones like adrenaline. Beta-receptors also inhabit blood vessels. When stimulated, they dilate arteries to increase flow to muscles — handy when you’re sprinting away from saber-toothed tigers. Block the beta-receptors, however, and you might get the opposite: Arteries that constrict too tightly. Familiar as they may be, beta-blockers are potent medications with real side effects, including depression. My own mother was on them once, and they turned her sunny disposition to thoughts of plunging off balconies.

I pulled out my cellphone and tapped the pharmacology app. All the data it delivered used to come in the form of a Gutenberg Bible-sized tome — the iconic Physicians’ Desk Reference that door-stopped many a doctor’s office. I typed in “atenolol,” then “adverse  effects.”

At the bottom of a long list was “Raynaud phenomenon.”

“How do you know?” several daughters asked at once.

“All the tests are negative, he looks good, and the medication was recently started. I’m pretty sure.”

“So what do we do?” the lead daughter asked.

“His pulse is on the slow side. That’s also probably due to the atenolol. You can’t stop it abruptly, or his blood pressure and heart rate could shoot up. Give him half a dose until you see your doctor in a day or two. Then she can substitute something else.”

Two weeks later, I checked in with the daughter. No more blue. And a good lesson in how the usual suspects never stop being so.

Tony Dajer is an emergency physician in New York City. The cases described in Vital Signs are real, but names and certain details have been changed. This article originally appeared in print as "Out of the Blue."