Hello sunshine! Unless you strolled into work an hour late today, you're probably celebrating the commencement of daylight saving time. Here in New York City, an hour of sunshine has moved from about 6:15 am—when we shrink from it and exclude it from our bedrooms—to 6:15 pm, when we can emerge from our offices to luxuriate in its warmth and embrace the opportunities for outdoor leisure activities. Even if the "lost" hour of sleep makes you drag a bit on the first morning, the sunnier afternoons are well worth that supplementary cup of coffee. 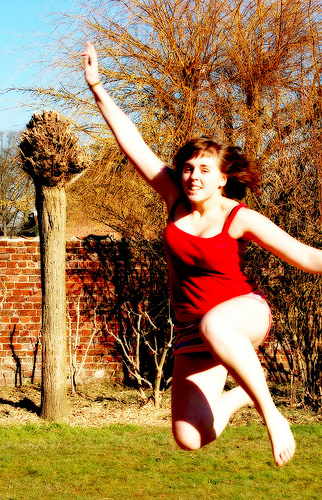 I'm a native of Orange County, California, so I like—no, I demand—my sunshine, but I'm not the only one disheartened by the demons of darkness. During the winter months, people tend to feel a bit down, and it's not just because their expectations for receiving various Apple products go unfulfilled. And while most people just experience a little malaise, some people actually succumb to seasonal affective disorder (appropriately acronymed "SAD"), which can cause fatigue, depression, excessive sleep, and a lack of interest in sex. SAD affects about 10 percent of people in Alaska, who can compensate by walking around with their own personal suns, and about 5 percent of people in NYC—presumably those who don't live near Times Square. But this really doesn't seem so bad when you consider that major depressive disorder may afflict 13 percent of Americans at some point in their lives, not to mention the suffering of our pets. So why does sunshine make us smile? The exact reasons for sunlight's strong emotional effects are unknown, but two key brain chemicals have been implicated—melatonin and serotonin. Melatonin's familiar to those weary travelers trying to adjust to a dramatically new time zone—it makes you sleepy, and it's tightly linked to our internal clock. It's also regulated, to an extent, by sunlight: Melatonin secretion is highest during hours of darkness, but when the first rays of light shine through your eyes in the morning, it starts shutting down, decreasing your desire to sleep. Serotonin is implicated in just about every mood disorder—depression, anxiety, eating disorders—and scientists have observed decreased levels in the winter months. When it comes to happiness and sunshine, the two may be inextricably linked—melatonin is manufactured from serotonin. One possibility is that when melatonin levels increase, serotonin levels may decrease, since it's converted to melatonin. This doesn't mean we're depressed while we sleep, but it might have a stronger emotional impact if we're trying to do our normal activities. When our melatonin levels drop at daytime, our serotonin levels increase, allowing us to greet the day. Image by worak via Creative Commons