A generation of human genetics & genomics

If you are interested in human genomics and the types of papers I often review and discuss in this space, there's a chapter of Vogel and Motulsky's Human Genetics: Problems and Approaches you might find of interest. And, I just noticed that you can get it online (if you have academic access). It's titled: Genetics and Genomics of Human Population Structure. Here's the abstract:

Recent developments in sequencing technology have created a flood of new data on human genetic variation, and this data has yielded new insights into human population structure. Here we review what both early and more recent studies have taught us about human population structure and history. Early studies showed that most human genetic variation occurs within populations rather than between them, and that genetically related populations often cluster geographically. Recent studies based on much larger data sets have recapitulated these observations, but have also demonstrated that high-density genotyping allows individuals to be reliably assigned to their population of origin. In fact, for admixed individuals, even the ancestry of particular genomic regions can often be reliably inferred. Recent studies have also offered detailed information about the composition of specific populations from around the world, revealing how history has shaped their genetic makeup. We also briefly review quantitative models of human genetic history, including the role natural selection has played in shaping human genetic variation.

If you're a "close reader" of the blog posts here you won't see too much that's new, but the authors of the chapter really tie many points of interest together well, and they bring a historical perspective to it, going back to The History and Geography of Human Genes. A worthwhile 25 pages if you're interested in current developments in human genetics and genomics, but can't follow what's going on because of the lack of context or technical confusions. Here's a chart reproduced from The History and Geography of Human Genes: 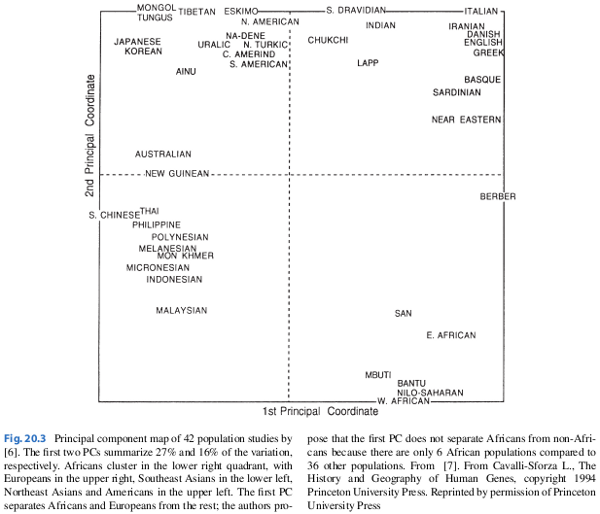 And now a little less than 20 years later, a similar chart, but with fine-grained positioning of individuals instead of just relationships between populations: 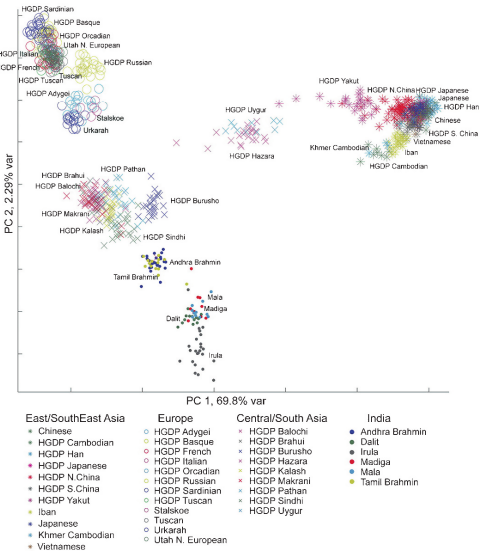