A Dream Not Deferred 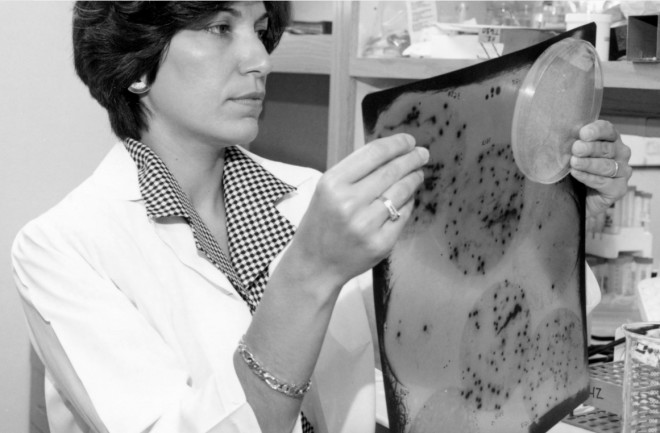 Huda Zoghni, a Howard Hughes Medical Investigation at the Baylor College of Medicine, became on of five researchers to receive a 2017 Breakthrough Prize in Life Sciences.

Zoghbi got the award, which comes with $3 million in cash, for discovering the genetic cause of two crippling and ultimately fatal disorders, spinocerebellar atazia and Rett syndrome. Winning this prize is, in a sense, the culmination of a decades-long effort, during which she had to surmount scientific challenges, and civil war.

Zoghbi, who was born and raised in Lebanon, started medical school in 1975 at the American University in Beirut, which was then considered to be perhaps the finest university in the Middle East. Unfortunately, that was the year Lebanon’s civil war exploded, and Beirut was in the center of the conflict.

With bombs going off at great frequency, and gunshots and artillery fire a steady part of the background, travel to and from the university became so dangerous that medical students who wanted to continue their education were forced to hole up on campus for six months straight. Zoghbi and her fellow students slept in the basement in window-less, double-walled rooms. The best place she could find to lay down her sleeping bag was in a small room—essentially a closet—tucked away in the women’s bathroom. She cooked her meals in a laboratory, using a Bunsen burner, but was still determined to keep up with her studies.

Her younger brother was wounded by shrapnel in 1976, and once the school year ended, Zoghbi’s parents sent the two of them to Texas to spend the summer with their sister. After arriving in the U.S. on July 4, 1976, Zoghbi panicked when she heard fireworks, which sounded like bombs going off. Her nerves were calmed when she quickly learned that this was part of the nation’s bicentennial celebration.

Zoghbi’s plan—to return to Beirut for medical school in the fall—had to be abandoned when fighting intensified in Lebanon, forcing the closure of both Beirut’s airport and the nation’s borders. By the time she realized that she was stuck in America, it was already October, making it hard for her to get into medical school. But she gained admittance to Meharry Medical College in Nashville, graduating three years later in 1979. She then started a three-year residency at the Baylor College of Medicine.

During one of her rotations, which lasted just a month, Zoghbi became fascinated with neurology. “It was like a big puzzle,” she recalls, “but it had a certain logic to it. And I’ve always liked puzzles.” After moving on to rotations in other medical areas, she found herself missing neurology. That’s when she decided to make it her specialty, switching over from cardiology.

She stayed at Baylor for another three-year stint—a fellowship in pediatric neurology, which began in 1982. A year later, in the course of a week, she met with two patients—girls of age 5 and 12—who shared the same unusual symptoms: Both were socially withdrawn and unable to speak. Their gait was awkward and balance poor. They suffered from breathing difficulties and, most striking of all, engaged in repetitive hand movements—a mixture of scratching, wringing, flapping, and clapping that rendered their hands essentially useless.

Zoghbi learned from a paper published in the Annals of Neurology that same year, 1983, that her patients had Rett syndrome, which affects an estimated one in 10,000 girls, “making it one of the most common causes of intellectual and developmental disabilities,” she notes.

After meeting with many other Rett patients, Zoghbi became convinced that it must be a genetic disorder because the symptoms were so consistent across so many different individuals. But she couldn’t do anything with that insight to help her patients until she could identify the gene responsible for the disorder—an undertaking that was not, as of then, part of her skillset.

In 1985, she began training in molecular genetics under the supervision of Baylor scientist and pediatrician Arthur Beaudet.

“As a pediatric neurologist, I was at the top of my game,” says Zoghbi. “But in order to learn how to do basic research, I had to go to level 0. Even though I’d been out of medical school for six years, I still knew less than the other graduate students in the lab.”

She needed a research project and decided, after conferring with Beaudet, to put her study of Rett syndrome on hold, temporarily. They felt she could make more progress by investigating spinocerebellar ataxia (SCA), an even rarer neurodegenerative disease that affects about one in 100,000 people, typically when they reach their 40s. SCA causes problems with speaking, breathing, swallowing, balance, and coordination that eventually result in the afflicted person’s death.

In 1993, eight years later, Zoghbi and her collaborator, Harry Orr of the University of Minnesota, independently discovered that SCA is caused by a mutation in the so-called ATAXIN-1 gene, which in turn allows toxic levels of the protein, Ataxin-1, to accumulate in brain cells. More recently, Zoghbi and her Baylor colleague Juan Botas, have been exploring therapeutic approaches that might decrease Ataxin-1 levels and thereby alleviate symptoms.

Zoghbi’s research on SCA, along with the genetic techniques she learned in that process, enabled her and others in her laboratory, most notably Ruthie Amir, to identify the Rett syndrome gene, MECP2, which contains information for making a protein of the same name. The discovery was made in 1999, sixteen years after Zoghbi first began studying the disorder and systematically analyzing DNA samples from her patients. She has subsequently learned that mutations in this same gene are associated with other neurological diseases, including some forms of autism, as well as learning and other intellectual disabilities, and even juvenile schizophrenia.

Now that Zoghbi knows the defective gene behind Rett’s, and has some understanding of the problems that can ensue from having too little or too much MECP2 protein in the brain, she is closer to being able to offer some relief for patients for whom there hasn’t been much in the way of remedies.

“It’s been a long haul, and many people told me I was wasting my time,” she says. “But I’m more convinced than ever of the value of doing basic research. I’ve been at it for 30 years now, and it’s only because of that effort that I can see light at the end of the tunnel—see a path toward interventions that could help my patients with SCA or Rett and other degenerative conditions.”